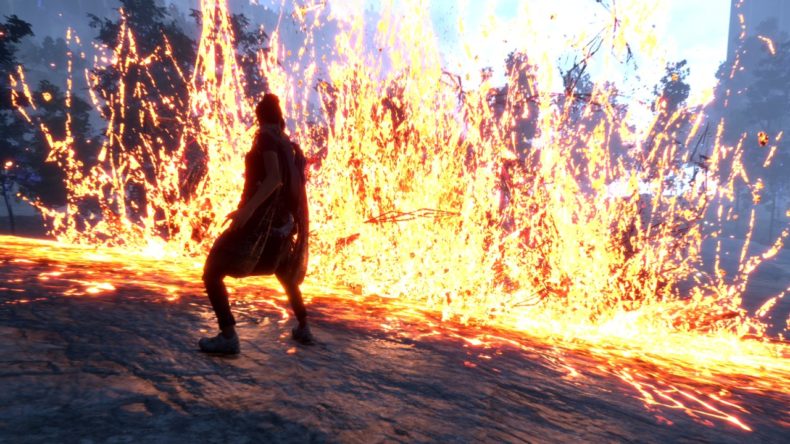 While there are loads of spells to unlock across Forspoken‘s four spell trees, some are just much more useful than others. In our Forspoken Best Spells guide, we’ll help identify the ones worth unlocking and upgrading first.

Bear in mind that you’ll only have Frey’s Purple Magic to begin with, and some of these will require you to unlock the other elements. Green Magic in particular will only be available towards the back end of the campaign. 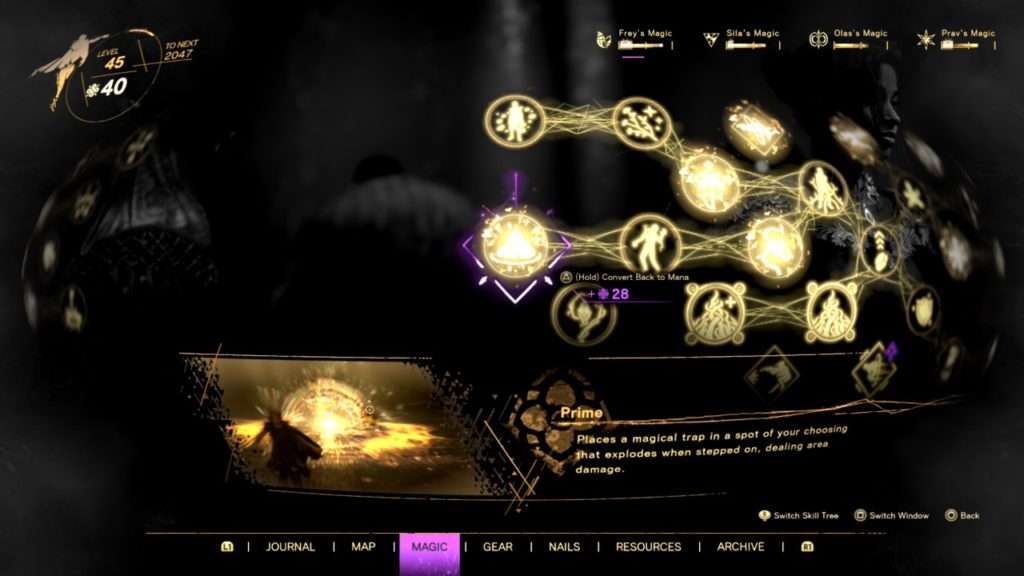 Prime is a spell you can unlock early on as it’s part of Frey’s arsenal. It’s super useful for getting some distance between you and the enemy as it drops a large mine down wherever you cast it. Not only does it do large AoE damage, it also knocks smaller enemies down.

This is essentially a personal turret. Even when upgraded it doesn’t do a lot of damage, but it’s great for taking out pesky flying enemies – particularly if you’re more inclined to use melee combat spells like Sila’s Arc Slice (see below). Disperse is just a solid choice for increasing your overall DPS while harrying the enemy.

Forspoken isn’t big on direct healing spells, but Tendril is one of the few options you have. Not only can it dish out damage and heal Frey at the same time, it also has a huge reach and will knock enemies back or down for a few seconds of breathing space. 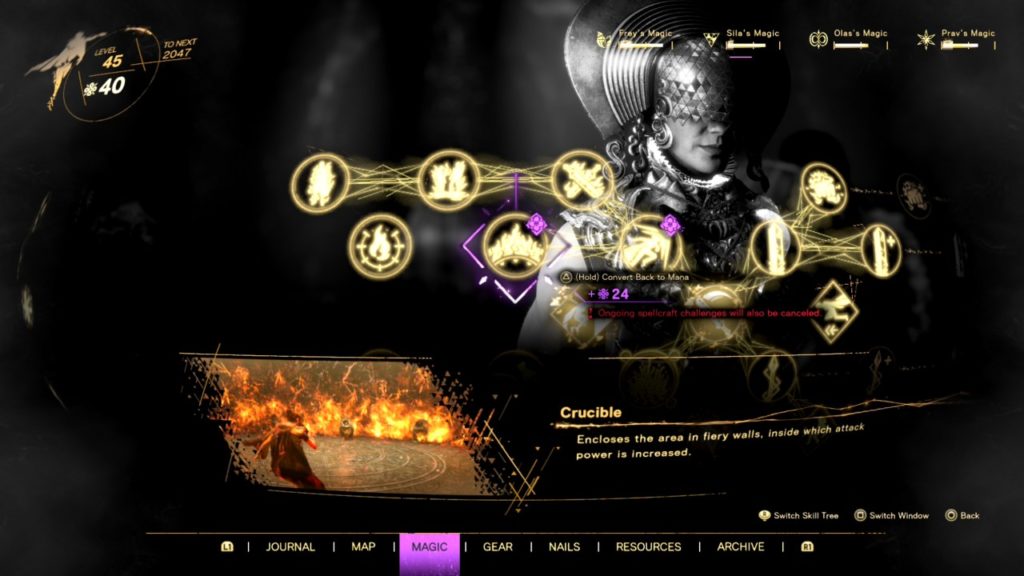 If you want to trap the enemy in close, keep them at bay, or segregate large groups, Crucible is the way to do it. It throws up a huge wall of fire that blocks incoming projectiles and harms any enemy that tries to walk through it. The Blue Magic tree has a similar spell in Eagre, which throws up a wall of water that damages and knocks enemies away.

One of the only direct melee spells in the game, Arc Slice is fast and highly damaging. You can switch it out to become a series of swift, fiery punches or a spear to throw, but there’s something wonderfully Soul Reaver-y about conjuring a big sword of fire and going to town.

While many of Forspoken’s traversal spells are great, the majority are unlocked through the story so you’ll get them anyway. Of the ones you can unlock yourself, Soar is probably the most useful as it doesn’t just boost speed. This adds a vertical burst to your wall-climbing while in Flow that can help you scale difficult cliff faces. Combine it with Leap and Scale for maximum height. 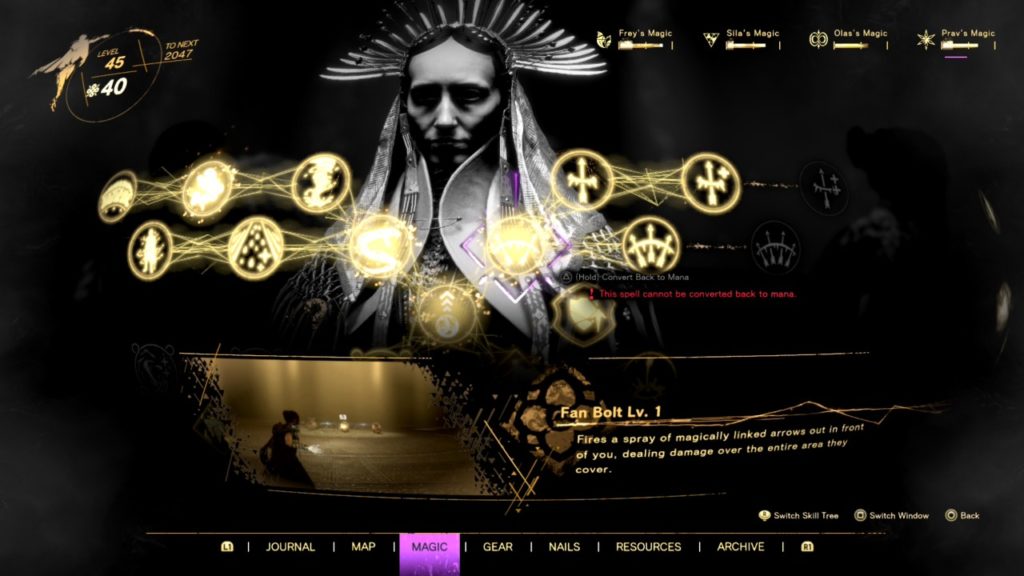 Fan Bolt gives Frey a magical bow and arrows that deal high water damage to enemies. Not only does it look cool, but because it fires a fan of watery bolts it can hit multiple enemies at once. It has a quick charge, too, making it very useful when combined with Up and Away.

The Blue Magic Surge spell is great for dealing with massive groups of enemies, as it creates a whirlpool that drags nearby enemies into it. It will even pull larger opponents into its heart, damaging them and giving you some much-needed thinking room.

Up and Away (Blue Magic – Switch)

Each of the four elements has a Switch spell, which you activate with both bumpers and the corresponding face button. However, only two feel really effective during battle, while the others are just a quicker way to switch elements without bringing up the wheel. Up and Away creates a column of water that launches Frey upwards out of harm’s way, while also damaging enemies caught in its blast. Combine it with any Combat Spell to deal some cheeky damage during the hang time. 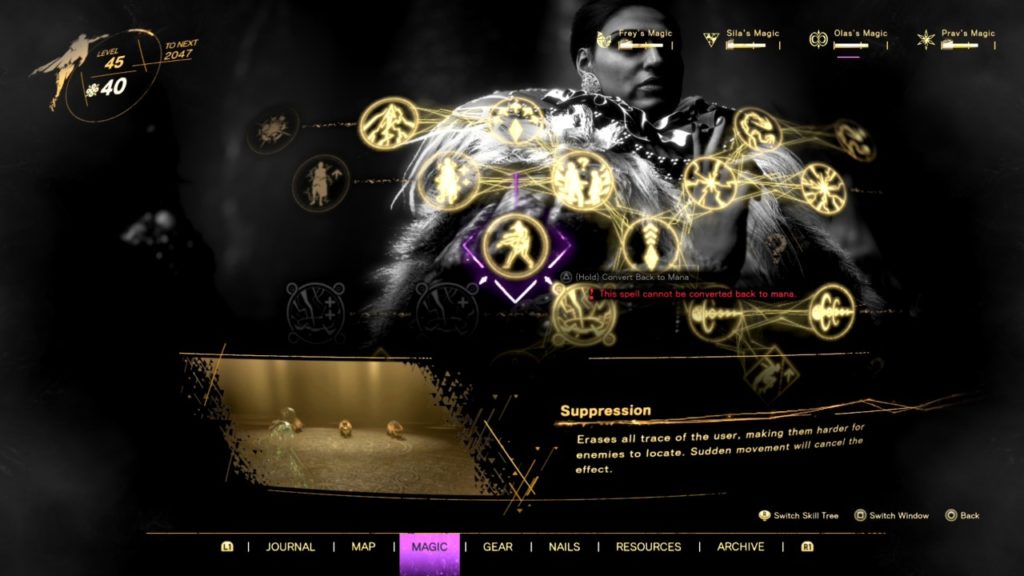 The base damage spell for the Green Magic tree is the Dart, which embeds itself in the enemy. Pulse Dart then locks onto the embedded dart to deal damage to multiple points on an enemy. It’s great for dealing quick precision damage to bosses or clearing out crowds of smaller enemies. It’s also seeking, which removes the need to be too careful.

If you often find yourself overwhelmed by enemies (and some of the late-game combat challenges are toughas nails), Suppression is your friend. It renders Frey totally invisible to enemies, giving you a second to get your bearings, or allowing you to walk right through them unmolested to grab that chest or item. Just don’t make any sudden moves!

Olas’s Green Magic is split between dealing lightning damage and casting illusions, and Distortion is the closest thing Forspoken has to a confusion spell. Cast it on an enemy and they’ll turn on their allies for a few seconds, letting you escape, switch spell trees, or run away.

Senior Content Editor Mick has been playing games for over 30 years and writing about them for around 12. After drifting from site to site for a while, settling briefly at the now-defunct Made2Game and freelancing for the gone-but-not-forgotten NintendoGamer Magazine, he came at last to rest at Godisageek. Mick has been a reviewer, staff writer and content editor here for some time, while also moonlighting a little for Red Bull Games. He has 4 kids, has written 2 novels, and sometimes even manages to pay a bill or two. You'll usually find him defending the galaxy in Destiny 2, battling evil in Diablo 3, or lurking in the background on Twitter. Find him there @Jedi_Beats_Tank, or on XBL (JediWaster247), PSN (Jedi_Waster) or Nintendo (JediWaster).
MORE LIKE THIS
ForspokenGuidestips