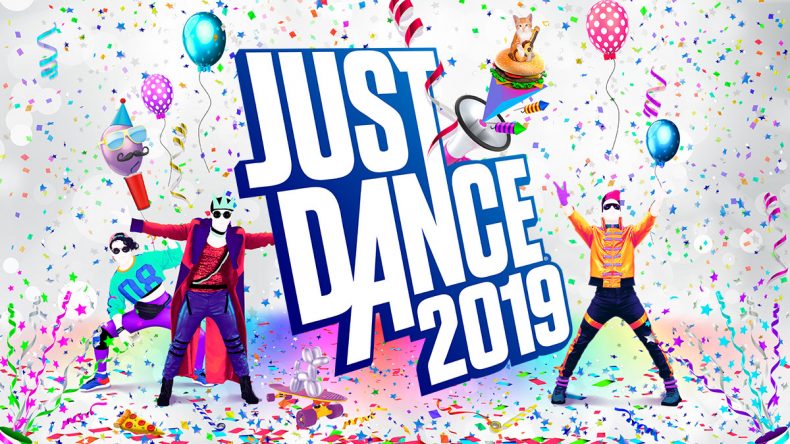 As predictable as another day dawning here I am once again reviewing a Just Dance title. 36 years old, gaining weight at a ridiculous rate and only just about able to keep up with an eight year old; Adam once again saw fit to torture me with the rigorous body work out that is Just Dance 2019. The thing is, when you boot this one up, things seem… different.

Now, I’m not about to go ahead and say that Ubisoft has reinvented the wheel here (it has not), but the first and most impressive thing that’s been done here is that the UI is so much better. Once you’re through the initial load screens and chosen between Kids and regular Dance sections you’re greeted by a lovely, white, clean UI that is less of an assault on the eyes and much more of a pleasure to navigate that the overly busy ones that went before.

All the information you could want about what you’re about to take on is given to you – song title, artist, difficulty – only now you also get a nice preview video to go along with the song giving you an idea of the horrors that await you. Not only this, but instead of the game’s workout mode being hidden away in a sub menu now you just press X to enter sweat mode. Once Sweat mode has been activated the game replaces the difficulty icon with one showing the intensity of the workout, you’ll also get indicators showing how long you’ve spent dancing to said song and how many calories you’ve burned doing so. This is all very helpful to those of us who may be piling on some unwanted excess weight and actually want to do something about it. The game now has challenges that you can complete to earn coins which in turn go into a Gacha machine for the chance to earn bits and bobs for your dancer card. The problem is that straight from the off these challenges ask you to do things through the Just Dance Unlimited subscription, which even though you get a month’s free trial to begin with it still feels a bit shitty.

That’s right though, Just Dance Unlimited is back, offering you all the feeling of a growing platform of music to dance to while only really allowing you to play what has gone before. All Unlimited songs now have a great big icon on them stating that they’re for Unlimited subscribers only, and with the new UI all the old songs aren’t segregated into their respective game’s segments. Granted you can use the game’s search function to look for songs, but unless you specifically know the song’s title or artist you’re going to be on to a loser trying to find it in a lengthy song list. You can’t filter by title and there’s no sub menus per section.Oh, did I also mention that the search UI is based on the old PS Store letter ribbon Sony recently ditched? Good times.

Then there’s the usual dancewalls that the Just Dance development team are so fond of. Locking features away until you’ve danced the required amount of songs to get them. I still can’t get my head around why this is necessary, especially when features like the playlists (themed songs for special holiday events or ones recommended to your tastes) are pretty cool, even if the majority of the tracks are once again locked behind that darned Unlimited paywall. I say this in every Just Dance Review now, but, I guess what really bothers me about the Unlimited thing is that it seems like Ubisoft are dabbling with the idea of a subscriber based platform. It’s a sound idea, and would really help people who love to play these games be it for parties, fitness or general enjoyment, and here it presents that case even further.

I’m not going to say that the music here is bad, but once you’ve jigged away to Liam Payne’s Familiar, or bounded around to Elton John’s I’m Still Standing you’ll find very few songs worth dancing to and songs like Mi Mi Mi or Milosc W Zakopanem are good for their novelty value but won’t really warrant return visits. On a side note there’s a Pac-man song with a video featuring dancers dressed as Pac-man and the ghosts, I couldn’t bring myself to dance to this and decided to feel ever so sorry for those dancers instead. That’s my biggest problem with Just Dance 2019, the track list just feels so devoid of much genuine quality and when you delve into the Unlimited free trial you really see it. Whether this means I’m some sort of music hating muppet who doesn’t understand what ‘the kids’ are into these days I don’t really care, I know a song I like to groove to when I hear it, and I just didn’t feel that here.

If you really like to dance then the Just Dance games are your only real outlet these days barring going to a nightclub, getting drunk and dancing with people you fancy. I guess in the grand scheme of things Just Dance is a cheaper alternative to having a life, and comes with a fitness segment to boot. I just don’t feel that outside of the hit and miss elements of the UI redesign that Just Dance 2019 does enough to justify a new purchase after 2018, you’re probably better off getting a temporary Unlimited subscription instead.

Outside of a mostly good UI redesign too many elements of Just Dance 2019 just feel too famili-famili-familiar.