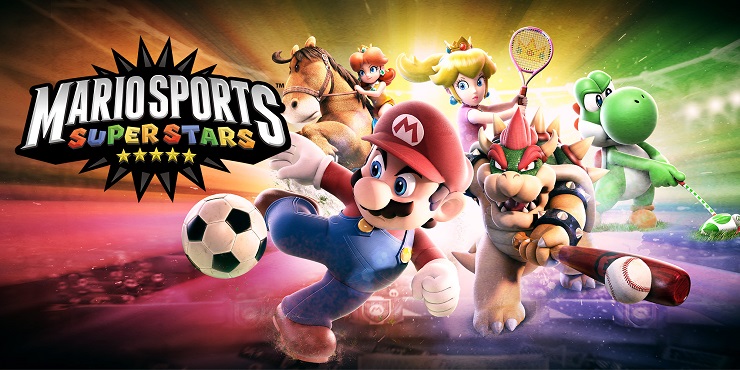 I’m not sure quite how much effort is required to take a colourful and charming cast and put them in a game that drains all the likability out of them, but if there’s one game that has succeeded in this endeavor it is Mario Sports Superstars.

A coming together of developers sees the game resemble a mish mash of differing styles that never quite gel cohesively. There appears to be three different rendering techniques used over the five events and it’s squeezed into a drab 1990s EA Sports style UI that has all the likability of the current US government.

That UI has got a lot to answer for as well, it’s functional at best allowing for quick and easy setup of the events on offer and the sub modes contained under each; but in the Camelot developed modes, sinking a putt in golf or winning a set in tennis will see the signature celebrations obscured by a great black and grey rectangle displaying the score update, which anyone familiar to memes will tell you is the best part.

But what of the events themselves? The Camelot events are the standouts here, but they’re essentially pared down versions of their full-fledged cousins. Golf is Mario Golf and Tennis is Mario Tennis: Ultra Smash from the Wii U; the Bandai Namco events, however, have been built from the ground up. Football brings eleven v eleven to the 3DS for the first time, then there’s Baseball (rounders to us Brits) and finally Horse Racing. Each event has the standard single player and multiplayer options, along with separate tutorials and training events to help you learn the ropes and then master them. All the sports kind of speak for themselves really as we know what they all entail, the only one that dares to be a bit different is Horse Racing. Now, this is a standard three lap race around a track, with tournaments being Mario kart style points leagues over three tracks. What makes it different though is that you have to take your horse’s stamina into account. You can ‘kick’ your horse to make it dash, but regular dashing will cause your horse’s stamina to deplete, and it fills back up slowly. There are stamina pick-ups dotted along the track, but they’re not really frequent. The best option here is what the game calls ‘herd mentality’; when you keep among the pack your horse’s stamina replenishes at a greatly increased rate, this means that you have to weigh up the right moments to dash ahead or to stay with the herd. If you try to stay in front, you’ll inevitably run out of stamina and be caught up by the chasers.

As well as this there’s a stable, where you can select a horse and look after it. Stroke it, clean it, feed it and take it for walks to help it bond with you and improve its stats; although, how much this affects its performance is unclear. As you take it out and about you’ll find dressing up items (amongst other things) with which to decorate your steed, in the long run it’s a bit pointless, but it’s a nice distraction.

There’s a lack of modes in each event, with single player being reduced to either an exhibition match or a three-stage tournament against the AI. Exhibitions allow you to select your preferred difficulty, while tournaments start off with an easy cup and then get progressively more difficult, but never to the point that they provide any substantial challenge. It’ll definitely be more taxing for kids, but if anything, it’s not really a decent way to polish your skills ready for human opponents via multiplayer as the challenge just isn’t quite enough.

Let me put it this way, on football on the easiest setting I managed to gain possession of the ball, then run up the pitch and score with only using my left hand, I didn’t even press the shoot button, on all difficulties I managed to rack up scores in double figures. In tennis I managed to win all the tournaments without conceding a single set. I had a bit more trouble with golf due to the nature of the elements and rolls of the green, and Baseball due to the unpredictable nature of the pitches, but at no point did I feel like I could fail. Being a Mario title there’s a few hidden characters to unlock, and success in the events will see you amass coins with which to buy virtual cards, which don’t really do anything apart from sit in an album for you to look at. Physically you can collect a whole new set of amiibo cards for use in the game with the added bonus that these unlock an extra game mode to play. The annoying part of this is that game mode isn’t available without an amiibo card, regular amiibo won’t work. Keeping a whole game element away from you behind a real world physical purchase is quite an unforgivable decision really, and as such I wasn’t able to test this mode out.

The dearth of things to do is to obviously ensure that each sport is represented to some degree, but it’s difficult to feel anything other than if there were only three events and more modes for those events that the game would feel a much more rounded prospect. Multiplayer is ham-strung by other players being required to have the game even locally; there’s no support for download play here, meaning that sessions with friends could prove to be an expensive affair.

Mario Sports Superstars wants to be the Smash Bros. of sports titles, but it really ends up being a PlayStation All-Stars Battle Royale instead. The lack of substance in all the modes makes the package a jack of all trades but a master of none and at the end of the day it’s a rather bitter experience, like licking a Switch cartridge.

Golf and Tennis are decent
Horse racing is something different

After this it might be high time for Mario to put his sportsing behind him and stick to regaling kids with stories of his adventures, rather than his sporting achievements.