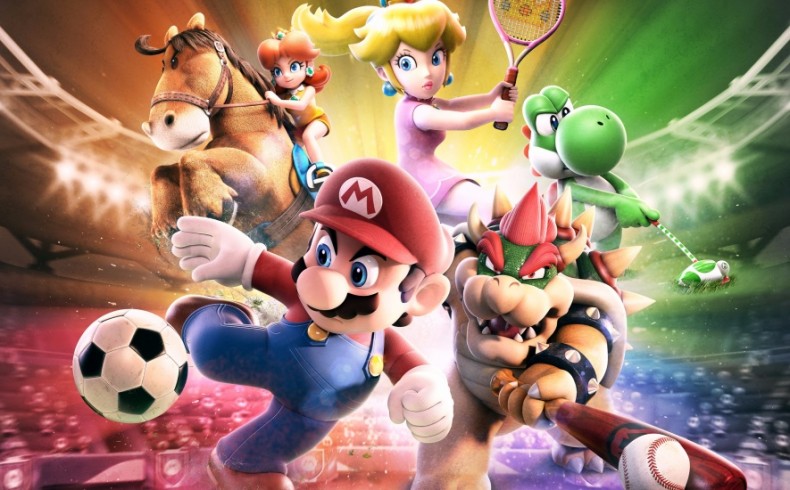 He’s a bit of a sporty guy that Mario. He goes for regular runs (with the occasional jump), and takes time out to compete with Sonic in the Olympics, now he’s kicking the hedgehog into touch and bringing his Mushroom Kingdom friends (and foes) in for his own sports compilation.

Granted, five events doesn’t seem like much, but this is a good decision from the developer’s point of view. Keeping the event pool small ensures that no two sports feel similar to each other and there’s no need to worry about forgetting the controls, the individual schemes are simple enough to remember, and each event carries a tutorial just in case your memory fails you. We’ve seen Camelot’s work with Tennis and Golf before, so we know what to expect from those events, as they’re essentially pared down versions of the older titles; the other events though are new beasts. Football brings eleven v eleven football to the 3DS for the first time, while baseball gives us our stick to ball needs; even against the computer there’s nothing quite like hitting a homerun when all the bases are loaded, while pitching sees you attempt to bamboozle the batter with a series of fast, screw and slider balls, to name but a few.

This package of entertainment is nicely rounded off with the inclusion of Horse Racing. The event is basically your usual lap based race around a track, but on the back of a mighty steed instead of Mario’s trusty kart. You’ll have to manage your horse’s stamina as you attempt to keep up a pace to maintain your position. In a nice twist keeping yourself around the other racers allows your horse to recover stamina quicker, meaning that going out in front isn’t really the best option if you want to win. To obtain that first-place position you’ll need to carefully manage your place within the running pack and time your final dash right to win, it’s like self-enforced rubber banding, and the race is much more competitive.

Where this compilation will really come into its own however is in multiplayer, both local and online will be supported with up to six players (depending on the sport you’re playing), so playing football online with a bunch of mates is a first for 3DS players and being able to relax with a friendly (or not) round of golf afterwards is the definition of a good day for some. It is unfortunate that download play isn’t going to be available for local multiplayer, but you’ll be able to take part with your friends online as well as internet randos (shudder).

Mario Sports Superstars promises to be a decent sports romp for those who deem singular event titles to not scratch their itch enough. We’ve tried golf and tennis, and we’ve hammered our way through the minigame-esque Olympics; there’re only five events but they’re varied enough to ensure that you and your playmates have a choice of things to do. Game on!

A lover, not a fighter and an all round good guy (he would say that, he wrote this after all), he's happy to be here as part of GIAG.
MORE LIKE THIS
Bandai NamcocamelotMario Sports Superstarsnintendo