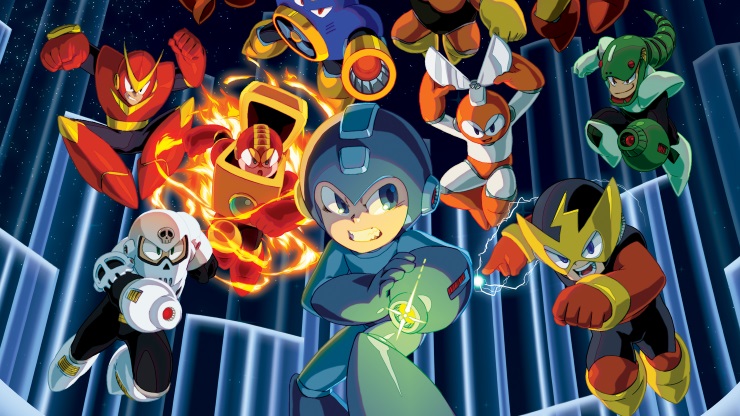 Has there ever been a tale more heartbreaking than the rise and fall of Capcom’s Mega Man? Initially one of the most popular characters in gaming, a saturation of almost annual sequels and spinoffs, combined with diminishing returns, has all but consigned the Blue Bomber to the scrapheap.

Still, since when has Capcom shied away from digging up the graves of forgotten heroes to make a quick buck? Thanks to this trend, Mega Man Legacy Collection was born. Collected for your enjoyment are all six of Mega Man’s original NES adventures, lovingly recreated using developer Digital Eclipse’s new engine, as opposed to emulation. Rather than lament the omission of Mega Man parts 7 (SNES), 8 (PSX), 9 and 10 (360, PS3 and Wii), let’s focus on the package we’ve been given.

Honestly, if you’re going to offer a focused curation if this series, you might as well start with the NES entries. Mega Man 1 remains a tough introduction and I mean that literally and figuratively. The first outing is rock hard and barely enjoyable for it, even if it does lay the foundations for the entire series: Jumping, shooting, platforms that disappear and reappear in a set order, and bosses that can be tackled in any order that grant Mega Man new weapons when defeated, with each boss having a particular weakness to a certain weapon. That’s all here, alongside a very pointless, erm, points system and some of the most unfair platforming this side of the final areas of Half-Life. The game’s sequel and threequel are clearly the shining points in the series and by extension, this collection. Granted, each successive Mega Man game has only offered incremental tweaks to the formula, but it’s in these two games where Capcom really hit their stride, with a far more sensible difficulty curve, and levels that are far more forgiving and memorable overall. Mega Man 2 gets the difficulty level just right, while 3 adds a new slide attack plus Rush the robotic dog, whose springboard, hover and underwater abilities allow for a few new tricks in terms of level design. Insert your favourite joke about a robot dog learning new tricks, ‘cos I got nothing.

From there, the games are still good – High points of the NES, even – yet are doomed to forever be more of the same, even if each entry adds a few new moves to the Blue Bomber’s arsenal. Entry numero 4 adds a charge attack which makes quick work of weaker enemies, 5 adds an unlockable helper named Beat who attacks enemies – you get the idea. With six releases in the space of seven years, it’s the original annual franchise, the Call of Duty/Assassin’s Creed of its day. I genuinely believe that everyone should play a Mega Man game at least once, and it’s lucky that Legacy Collection is one of the most user-friendly ways for modern audiences to experience these adventures – especially since this collection is much cheaper than purchasing the overpriced individual Virtual Console versions available on Nintendo systems. Unlike previous collections and re-releases that messed with the games, replaced the awesome soundtracks with badly looped CD audio and in one horrifying case, re-mapped the jump and fire buttons the wrong way around, Legacy Collection keeps things as authentic, while offering options for those who want a slightly more modern presentation.

Each game can be viewed through a sharp HD scaling, either in widescreen, full or original aspect ratios, and the unused areas of the screen can be filled with border artwork if desired. For those (like me) who remember the old days, you can turn on television or monitor filters which add scanlines and slightly degrade the image quality, as the original developers intended. While I’ve seen better, more authentic filters out there, at least the options are here so anyone can play these games how they want. Being 8-bit games, they’re rather short, especially with their built-in password systems and a brand new save state functionality, which just about makes it possible to finish Mega Man 1 without breaking several pads. Once you’re done with all six games, you can try a whole load of challenges that have been created to test even the most skilled of Mega Man veterans. Whether it’s rushing through a series of areas in the quickest time possible, or tackling the hardest bosses, these challenges add a little bit of bonus value for those that know the games inside out, or those who love them Achievements/Trophies. This mode also has leaderboard and replays, so you can see the best players and how they got those insane times and scores. It’s also a pretty good way to see how to easily navigate some of the harder challenges.

Another wonderful addition (and the one that’ll please ultra-Mega Man fans) is the Museum entry for each game. A mountain of concept art has been added for each title, as well as some really interesting promotional artwork and items as well – which is always nice to see in compilations like this. There’s also a music player, which is incredibly welcome, as these are some of the best soundtracks ever heard on the NES. While the presentation of Legacy Collection doesn’t compare to something like the sublime Rare Replay, there’s enough pin sharp illustrated artwork to put a smile on the face of any longtime Mega Man player.

Of course, these games don’t exactly hold up very well under the scrutiny of modern expectations. They are action-packed memory tests, from a time when that was how game design worked, and even with save states, frustration is an inevitability. Still, these are regarded as classics for a reason, and if you are able to look past the steep difficulty curve, Mega Man still retains the charm that made him so popular in the first place.

While not an essential purchase by any means, this is a fine collection and worth a shot if you’re curious, or are looking for an excuse to revisit these titles. Personally, I’m glad that we’re starting to see a return of retro compilations that show a little love to the source material, other than just chucking ROMs on a disc; Legacy Collection certainly shows that love. Fingers crossed for more a Mega Man X Legacy Collection next.

Missing entries 7, 8, 9 & 10.
These games are possibly a bit too similar.
Difficulty level might be too frustrating for some.

While not an essential purchase by any means, this is a fine collection that's worth a shot if you're curious, or are looking for an excuse to revisit these titles.