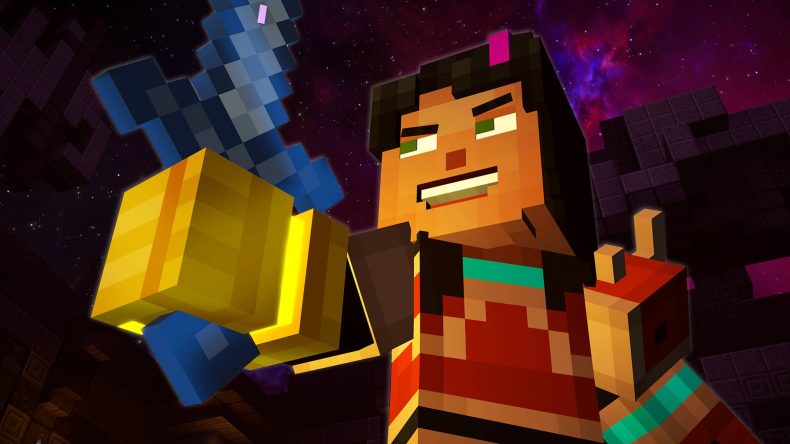 The finale of Minecraft Season 2 is upon us, and overall it has been a way more consistent season than the first one, helped in no small part by the fact that the entire season has followed one storyline rather than trailing off into a series of bitty episodes loosely connected to each other. Season two has been relatively strong with the last episode being an exception. I was disappointed with Below the Bedrock because I felt that it floundered a little bit and added nothing really new to the story other than offering a bit of filler in terms of character progression. Thankfully, Above and Beyond manages to ramp up the action quite a bit, particularly towards the end of the episode and neatly manages to top and tail the whole season.

Like every episode prior we begin pretty much where we left off in the last one with our team of friends emerging back into the world near Beacon Town. Things have taken quite the turn in Jesse’s absence with the town undergoing a major restructure including a huge floating palace in the sky. The Admin has taken on the form of Jesse and has been ruling Beacon Town with an iron fist. The residents have been subjugated and are now living under a tyrannical regime, fearful of the Jesse imposter and what he might do. Friendship has been a recurring theme that runs through season two; we have had Jesse upset that Axl and Olivia aren’t around as much any more, Radar is desperate to please and befriend Jesse and there has been more than a few moments where Petra has lamented that Jesse’s time as leader of Beacon Town means that he isn’t around to go adventuring with her as much any more. Friendship is also a key component to Romeo, the Admin’s personality. Over the course of the season we have learned that he hasn’t always been alone, there were two other Admins who were his friends, but something went wrong between them and he killed one and imprisoned the other. In his guise as Jesse, Romeo is keen to establish friendly ties with all of Jesse’s friends, including the absent Axl and Olivia who we find in Beacon Town. He constantly remarks what a great friend he is and demands very public displays of friendship from Axl and Olivia.

I’ve often wondered why the first season went to such great lengths to set Jesse up with a core group of friends that included Axl and Olivia to then pretty much cast them aside after the culmination of the Wither Storm story. It felt odd then, and it feels odd to see them back in this episode playing a relatively key role in helping Jesse to regain control of Beacon Town and defeat the Admin. It appears over time in their absence that Olivia has got a new voice actress; she doesn’t appear to be voiced by Martha Plimpton any longer which is a shame and is particularly jarring when you first hear her speak. I speculate that this is perhaps why Olivia in particular hasn’t featured much over the latter part of season one and all of season two and as such I question why Axl and Olivia even needed to be in this episode at all. The writers have done so much to make them irrelevant in previous episodes that their appearance here acts purely as a means to hammer home the plot points about friendship which could have been achieved either way without them. The same too could be said about the ridiculous appearance of Ivor as a stealth ninja, other than for comedic effect of course.

The action ramps up quite a bit in Above and Beyond with a fair amount of fighting one on one with Romeo. The battles are particularly QTE ladened, but as always due to the intended audience the window for error is pretty wide. I will say though, that the violence in this episode seemed to stand out a lot more for me than in previous ones. The way that Jesse deals with Romeo in the finale is particularly violent and there was a scene very late on where one character breaks the neck of another that I felt was a little over the top in a game that is largely aimed at young children. In the previous episode I complained about audio issues a fair amount, this episode thankfully runs very smoothly and in actual fact features another great soundtrack. The accompanying music at the beginning reveal of Beacon Town under the rule of the Admin had a very faint hint of Flash Gordon which I found interesting especially when considering that Romeo’s floating palace bears a not too dissimilar look to Mingo City from the early 80s cult classic. Why this comparison, I have no idea, but it amused me nevertheless.

Overall I liked episode five, it is a definite improvement on the previous installment, however despite being very action-packed it lacked a lot of the humour of earlier episodes in the season. Tonally it seemed a bit off as well, particularly in the depiction of the violence that the characters inflict on each other. Previously this had been restricted to only battling the various mob enemies that Minecraft has, but the way that Jesse defeats Romeo feels a little heavy handed (quite literally!). The ending epilogue scene does manage to top and tail the season very well with a reference to Radar becoming the Hero in Residence which I thought was a neat touch, and the final choice between Jesse and Petra felt particularly fitting considering the over-arching theme of friendship. There was a certain sense of finality to Above and Beyond which felt good, but it was also left open for perhaps a season three so this may well not be the last time we see Jesse and friends.

A bit heavy-handed with the violence for a kids game

The season ends with an action-packed episode that neatly ties up the core themes running through the season. It is lacking in the humour of some of the previous episodes and the violence towards the end feels a little out of place.