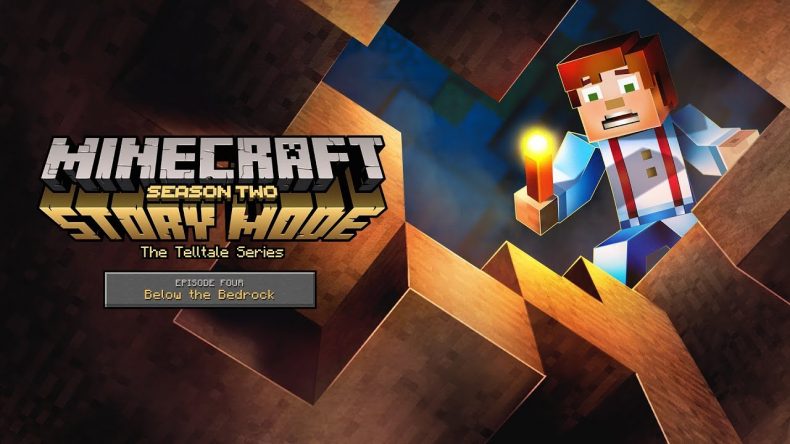 I’ve enjoyed the second season of Minecraft Story Mode so far. It has been an entertaining tale of Jesse squaring up to an interesting bad guy in the form of the Machiavellian Admin. However, Below the Bedrock is a notable dip in quality from the previous episodes with quite a few audio issues and a story that feels more filler than anything else.

We begin where the previous episode so abruptly left off, descending into a dark and dreary hell-scape reminiscent of the Nether. The mysterious “Prisoner X”, or Xara continues to be obnoxious and, frankly,  whiffs faintly of betrayal. She may well turn out good, but for now Jesse and friends would do well to avoid placing too much trust in her is all I am saying. She looks shifty, and in the first few scenes it appears she has lost her mind as well.

Jesse is a master in being nice though, and he quickly smooths things over with her and even manages to get some form of co-operation out of her. It seems that before the Admin went mad with power he was friends with Xara and another admin called Fred, but something went wrong between them all and now Fred is dead. Fred, it seems was the best of them according to Xara and he held the key to terminating the Admin, who we find out is called Romeo, once and for all. Below the Bedrock therefore is an episode focused on Jesse and friends trying to locate the “weapon” that will destroy the vindictive Romeo once and for all. I think part of my issue with Below the Bedrock is that there isn’t any menacing baddie for our crew of heroes to pit themselves against in this episode. Romeo, we are told is above ground in Beacontown in the guise of Jesse and up to all sorts of trouble. He doesn’t make an appearance in this episode and it feels poorer for it. The story is very much an extended fetch quest, and while there are a couple of exciting action-packed sections to it, much of it consists purely of conversations with people of the underneath world, and a few scenes where the adventurers are travelling via minecart to different destinations.

There are a few sections that try some new things though. Over in Fred’s fortress there is a trivia contest that demands that players really pay attention to what the characters are saying to them. And there is an exciting action scene in Romeo’s town which requires a bit of problem solving to be successful, but these two scenes feel fairly sparse in the two hour episode.

Other elements of the story feel disjointed and out of place. There is a section that introduces a strange group of people that promptly disappear never to be seen again, although this may well be dependant on a story choice made a few seconds prior. And there is a reappearance of an old character that we haven’t seen for ages that feels totally at odds with what is happening. He appears, conveniently provides Jesse with an item required to return over ground, and leaves again with only a really tenuous explanation as to why he was even there in the first place. The disjointed nature of the narrative is further exacerbated by some really quite serious audio issues that plagued my play through. The worst of which was in the section where you enter the trivia competition. In this area you must speak with different characters to learn some personal details about the former admin, Fred. During one of these scenes, after performing the actions that would open up the character to trust me enough to part with the information, the sound dropped entirely and I didn’t hear the answer. Fortunately, the sound returned and Jesse repeated what she had told me otherwise I would never have known the detail. Sound issues have been fairly common across every episode, but they generally take the form of a bit of stuttering, having a whole section go silent is very poor indeed and further emphasises the need for Telltale Games to update their engine.

It isn’t all bad, there are continuing themes that have run right through this season that get some satisfying progression. Firstly, Radar the overly needy and cowardly side-kick has had a pleasing arc over the course of the four episodes and he gets his moment to shine towards the end of Below the Bedrock. Furthermore, the ongoing notion of friendship and how that changes over time gets some more meat added to it in the form of a surprisingly tender moment between Petra and Jesse. It is a shame though, that these moments weren’t part of a more interesting and exciting episode overall.

Below the Bedrock is a disappointing episode, particularly on the back of the mostly excellent Jailhouse Block. It feels like a tricky middle episode despite being the penultimate one in this particular season.  The action sequences continue to be a lot of fun, and there are some nice moments with characters both old and new, it’s just a shame that it feels nothing more than filler in preparation for what I hope will be an action-packed finale.

Audio cut out frequently throughout
Feels like a filler episode

Below the Bedrock is a disappointing episode. It feels nothing more than filler in preparation for what I hope will be an action-packed finale.