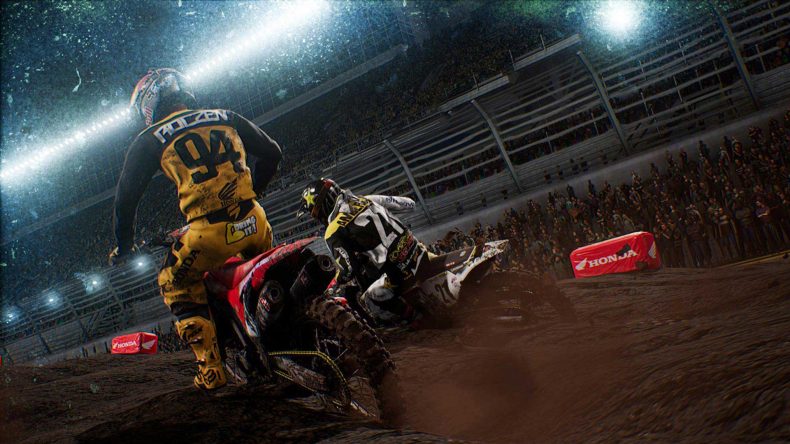 Remember Motocross Madness? No, not the one with big-headed caricatures on Xbox 360; the two originals on PC, with a mixture of arcade and realism and an emphasis on fun. They informed the ATV Offroad Fury games on PS2, which were equally fun. I long for a return to those days. Milestone has a bit of an inconsistent history with motorsports games though; revitalising the MotoGP franchise with Valentino Rossi: The Game and MotoGP 17, but struggling to find the right balance with the WRC licence before it passed to Kylotonn. Milestone’s MXGP games haven’t quite been able to get things right either, but they’ve been playable and appealed to a market that just doesn’t see the spotlight much anymore.

Unfortunately, that spotlight illuminates nothing but problems with Monster Energy Supercross, the latest in Milestone’s attempts to get motocross games right. From the off, it takes far too long to even reach the title screen, before dumping you in at the deep end without any form of instruction. You’re given control of a bike and expected to race, albeit with full assists and on easy difficulty, but all you have to go on is a few controls displayed at the side of the screen. Indeed, even once you start the game proper, tutorials are buried within the Extras menu. If you didn’t know that holding the clutch can help you get a better start, you’ll never know unless you explore the menus. This feels like it shows a lack of respect for anyone new to the series, even fans of the sport who are just discovering the videogames for the first time. The strange thing is, Milestone’s MotoGP games have catered extremely well to new players, so why not here? The actual presentation is fairly impressive, at least. There is a quality here that just captures the feel of supercross events, from the girl walking the starting gates (I know this is a bit of a hot topic right now, but it’s part of the sport and so adds to the authenticity of its presentation) to the fireworks and the glare of the lights that surround the stadia. There’s even a layer of grime on the camera that becomes visible in the lights. What Monster Energy Supercross lacks in sheer graphical grunt like polygon count and extremely detailed textures, it makes up for in post-processing, giving it the look of TV coverage whilst hiding any rough edges.

The rough edges that are visible however, are all in the physics and framerate. This is a fast-paced sport and so you’d be right to expect quick reactions from the controls and the bikes themselves, but there is a twitchiness to both that just feels unnatural. Again, a certain amount of this is realistic, given the speed and terrain that these bikes deal with, but it just doesn’t translate well to the analog stick’s input. During one race, my bike refused to be directed along a straight line, leaving me weaving across the track as I wrestled with the awkward twitchiness of the handling. Normally I would concede that I was at fault, but I’ve played enough of these games now that I am aware when they’re just not user-friendly, be it down to the controls or the handling model itself. When you do make a mistake, be it forced or through a miscalculation on your part, the game is kind enough to give you a rewind button (unless you turn off that option), giving you the chance to undo any crashes without penalty. It’s a welcome addition, considering the issues present. There is plenty of content in Monster Energy Supercross (the name just rolls right off the tongue, doesn’t it?), from the lengthy career mode to exhibitions that encompass the official riders and tracks, through online racing; but the most impressive feature has to be the track editor. I’m a big fan of track editors, wishing they would appear in more motorsports games of the two- and four-wheeled variety, so I was intrigued to see how this one worked. Would it compare to the simple pleasures of the Motocross Madness editor?

While not quite as simple as that, the track editor here is easy to use and comes loaded with content. My first track took around ten minutes to put together and test, before letting the AI do a quick lap to validate it for uploading. Firstly, you begin by choosing the size and shape of the stadium in which your track will live; choose your starting module, which consists of the wide gate and a long run up to the first corner; then it’s simply a case of choosing each piece in turn, from the selection of turns, bumps and jumps, before selecting a finish line and then joining the track up to that first straight to complete the circuit. During the course of the game you’ll earn extra pieces for the editor too, as you level up your rider. Once you’ve finished the circuit, you can share it for others to play online. Aside from the editor, I spent most of my time in Monster Energy Supercross’ career mode. I created a rider from the rather small selection of premade faces, chose a team and sponsor, then off I went into my first race. I listened to the enthusiastic commentator introduce the stadium and then my own rider; I engaged the clutch and revved my engine, awaiting the gate dropping to signal the race start. The gate drop was accompanied by a momentary pause as the game struggled to keep up, which I learned would happen every single time, before the inevitable race for the first corner. The framerate struggles here, as the full roster of racers pile into the opening corner like it’s an online racer, smashing into each other and sending unconvincing ragdoll bodies flying in every direction. It’s like a metaphor for the game as a whole, quite frankly.

While I do appreciate the rather impressive track editor and the amount of content provided in the game, it just wasn’t enough to distract me from the poor handling and the bizarre physics. Nor was it enough to make me look past the AI that loves nothing more than to bash you and everyone else, or the stuttering performance and excessive load times. It’s not unplayable by any stretch of the imagination, but fans of the sport deserve much better than Monster Energy Supercross.

While possibly catering to fans of the sport in terms of content, the overly aggressive AI and unnaturally twitchy handling mean that Monster Energy Supercross just isn’t that fun to play.