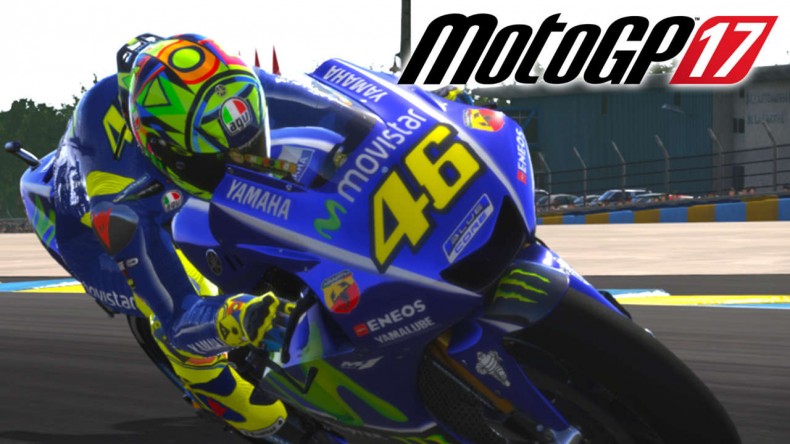 I was pleasantly surprised by last year’s Valentino Rossi: The Game, which was, confusingly, actually the official MotoGP ‘16 title. It put a wayward series back on-track (sorry) and included one of the best career modes available in any racing game, not just the two-wheeled variety. So, where does Milestone go from there?

Firstly, it has stripped away the Valentino Rossi name and made it all about the sport itself, not one rider. This means that the dirtbike stuff has gone too, so that MotoGP becomes the true focus of the game. It does mean that the personality is gone though, so it’s more of a po-faced representation of the motorsport, but Milestone just lets the racing itself do the talking.

There’s certainly plenty of that, too. There’s a plethora of game modes, such as the usual exhibitions, championships (including co-op), splitscreen multiplayer and of course the online racing, and there are a huge number of licensed bikes and riders to choose from across MotoGP, Moto 2 and 3, as well as Red Bull Rookies. And with 18 official tracks to race on, it offers so much content.

But after last year’s fantastic career mode, Milestone has gone one step further, this time offering two separate career modes: Rider and Managerial. These are probably self-explanatory but I’ll go ahead and sum them up anyway. The rider’s career is much the same as the last game, as you take your custom rider (male or female, from set visual choices) from the Red Bull Rookies championship, all the way to the top of the MotoGP standings. The managerial career is much deeper and with greater involvement beyond just racing, as you create your own team (you still ride in races, yourself) and sign new riders and sponsors, developing your bikes throughout the season in order to be the best. Again you start at the bottom and work your way up, but you can have bikes competing in different classes, which tests your managerial skills to the limit. Managerial mode offers an incredible amount of depth as you run your team, deciding on how to use free weekends between races to further your team’s reputation or earn more money. Much like F1 2016, you can use money to develop various parts of your vehicle, but will have to wait a set period of time before the R&D department have the upgrades ready for you to apply. Having this mode separate from the Rider career is a good idea really, as it doesn’t force those players that just want to race, into the whole micro-management scenario.

Actual racing is as good as ever, with its buttery smooth 60 frames per second framerate. There are grids of over 30 racers depending on your chosen class, and you have the choice of jumping right into the racing, going through qualifying, or having the full weekend experience, allowing you to tweak your bike in practice; and you even get the warm-up session before the main race. You can also choose from standard, semi-pro and pro handling modes, with pro being as close to the real thing as possible, and a huge challenge to boot. I’m certainly no expert when it comes to the two-wheeled variety of motorsport, but I did enjoy learning how to fight the bike as it struggled to put the power down out of a corner.

Once you learn how to keep the bike upright in your chosen handling mode, and those red lights go out, that’s when the game is at its best. The physics are spot-on as you shift your weight on the bike, guiding it around corners, and the battle against the AI is wonderfully tense and action-packed, but that’s not always because the race itself is tight and fun. Sometimes, it’s because the AI is incredibly aggressive and refuses to budge off the racing line around corners, even if you happen to be in the way. When using pro handling this can be incredibly frustrating, as you’re knocked off your bike yet again by an overenthusiastic AI competitor. Luckily it’s not always this bad, and if it does happen to you, the rewind feature is there to fall back on. A quick press of the L1 button (on PS4) will see time reversing a short distance and you can simply make the decision from where to resume your race, then jump back in and attempt to correct that mistake or avoid that collision. Hardcore players can turn this feature off for extra rewards, but it’s incredibly useful as you learn the game. Actually, it will remain useful throughout your time with MotoGP ‘17.

When you first get onto the track you’ll notice that it’s not exactly winning any awards for its visuals, but although the pure graphical grunt may not be there, a real attention to detail certainly is. The bikes themselves are lovingly recreated, inside and out, but so are the riders. Real racers’ faces are seen (well, around the eye region anyway) beneath the helmets and they each have different riding styles, giving them some personality on the track. Those tracks are recreated with real precision and will be instantly recognisable to any fans of the sport, and different weather effects can be quite impressive to behold at each one of the 18 officially licensed venues.

But you know what I noticed first, before any of the visual stuff? Good lord, these bikes sound good. Their throaty roars sound better than any previous motorbike game I’ve ever played, lending the game an even greater sense of realism. Each class of bike sounds different, each manufacturer’s engines sound different, and every one of them sounds cool. There’s no other way of putting it, quite frankly. Pop on a half-decent headset and crank up the volume, you won’t regret it.

There is so much content on offer in MotoGP ‘17, with two career modes that could potentially pull you in for tens of hours each, especially when played with full weekends and longer race distances (I personally went for 25% race length, but you can go for the full distance for the ultimate simulation experience). The management side brings with it a new and different perspective, but the racing always remains at the centre of everything and it’s definitely still at the top of its two-wheeled field. It’s just a shame that the AI is still a little too aggressive, but luckily it doesn’t stop MotoGP ‘17 from being a cracking racer.

With two career modes and a buttload of customisation options, combined with exciting racing at any level, MotoGP ‘17 is another success for the series.

RIDE 4 Racing onto Consoles and PC this October