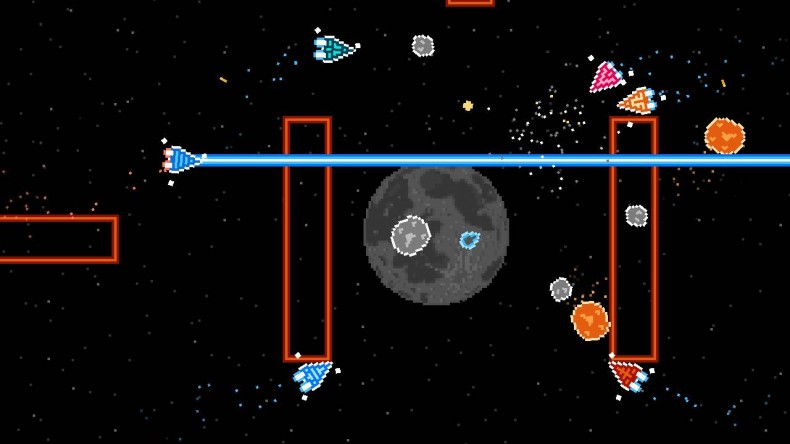 Whenever a new game comes out for Nintendo Switch it’s hard not to start harping on about the console’s USP: spontaneous multiplayer, gaming on the go, yadda yadda yadda, and it’s easy to go into the downside of it too, what with accessories costing so much. The thing is, a lot was made of the Wii U’s capability for different styles of multiplayer with the separate screens but that promise was hardly ever worked on, at least with the Switch, developers are actually delivering.

The latest crew are Panic Button bringing a port of Wild Rooster’s Astro Duel, a multiplayer party game where you’ve got to blow seven shades out of each other in tiny little spaceships. The action is viewed from a top down perspective with up to six ships moving around a host of arenas to gain victory. It’s a one hit kill, and each ship is outfitted with three shots which replenish over time, so you can’t just spam fire to win. You fight it out in rectangular arenas full of scenic elements (ranging from overhead canopies that block your view to gravitational fields that affect your ship and weapon trajectories) and asteroids that dispense single-use power-ups (missiles, proximity mines and lasers to name but a few), when destroyed. Each ship has a turning circle of zero, meaning you can spin on the spot, and you use a separate button to thrust forward one button attacks and one uses whatever power-up you happen to have acquired. There’s enough different about each arena to make each of them worth playing on, so much so that I leave the stage selection on random so that things were constantly changed up. Each one invites varying degrees of chaos, but never delivers less than riotous fun from one fight to the next.

Kills are racked up onto a graph at the end of each fight and the first to the allotted number of kills over the course of all the stages is the winner. See, each stage ends when one ship remains, but because of the scoring system it doesn’t pay to just stay out of everyone’s way, it’s possible to be the last ship standing and not accrue a single point, meaning that aggression is the only way to win. One hit and you’re dead, but if you don’t take the risk you’ll never manage to win; it’s a terrific way of ensuring player engagement in the fights.

Ships can succumb to inertia created by their weapons, if you were to take a shot when you’re not boosting your ship will be propelled slightly backwards, meaning if you’re not careful you could end up in one of the environmental hazards or a lingering proximity mine, so you’ll need to keep your wits about you as you fight, which is easier said than done when you’re zipping around trying to line up a good shot. Considering how fun the core gameplay is, it’s a shame that there’s so very few modes to indulge with. You can play on your own, or with up to six players across three different play styles, but there’s only four battle modes, and that’s only because there’s only two battle modes, but split into single and team play for both. Out of these Kill Pilots is probably the best, tasking you with not only taking out the ship, but the pilot themselves afterwards. Once the ship is destroyed the little pixel animal that was flying it is then exposed but can move about, you’ve then got to take them out to get the kill, but, if they manage to survive for a period then their ship is returned to them, this can lead to some great hilarity as pilots Benny Hill their way around the place dodging shots in a desperate attempt to get back into the fray.

So, there’s only a few modes but the more people you have the better, and of course, there’s support for extra Joy-Cons or Pro Controllers. One of the modes allows you to play with four players using the touch screen, which sounds like a good way around not having multiple Joy-Cons, but you’re limited to turning right, which is way too restrictive. A great idea, but sorely lacking in its implementation.

Astro Duel Deluxe is like if Asteroids and Towerfall had a baby. It’s great fun, but the lack of modes means that you won’t be playing it for hours. It does, however, work as a great palette cleanser between races on Mario Kart and it’s another notable example of what the Switch is all about.

It’s not feature rich, but Astro Duel Deluxe is another title making excellent use of Nintendo’s console vision.