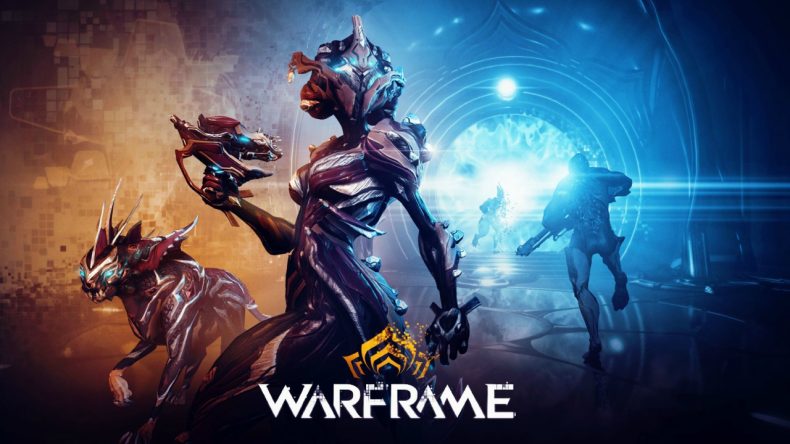 Note: Warframe has been around since the launch of the PlayStation 4 in 2013, but is now a vastly different beast than it was then. This review of the Nintendo Switch version is the first time we’ve scored it here at God is a Geek, so we’re treating it like something brand new.

I’ve got to be totally honest, when I heard Digital Extremes and Panic Button were porting the super-fast sci-fi ninja action game Warframe to Nintendo Switch, I was a bit worried, despite Panic Button’s sterling work with Rocket League, Wolfenstein II, and Doom. We also saw the latter in particular struggle a bit on Nintendo’s machine, and if anything Warframe is larger and even faster than Bethesda’s horror-flavoured FPS, despite being less labour-intensive overall. Having now spent some time with it, I’m happy to report that it’s one of the Switch’s best ports to date.

Locking the frame rate to 30fps helps immensely, as does the technology employed by Panic Button to sharpen the textures where applicable and maintain as much graphical fidelity as possible. Be aware, this does not look as pretty (docked or undocked) as the PS4 version, which in turn is not as stunning as the PC version – but that element of visual shine is the only thing Warframe doesn’t carry over to the Switch. And if anything, playing at 30fps makes aiming and reacting just that little bit easier, which is good because you’ll be doing most of that while running, sliding, and bullet-jumping through hostile environments. You can go into the settings and toggle certain effects on or off, such as particle bloom and screen blur, which didn’t greatly affect the performance for me either way, although your findings may vary. Interestingly, motion controls have been included for greater precision with ranged weaponry. I personally don’t get on with them, but others might find it makes a difference, especially those patient enough to use bows and sniper rifles.

Warframe’s dense and somewhat vague story shares a beat or two with that of Destiny, giving us a glimpse of a far-future solar system in which humanity uses ancient, advanced technology to defend the Earth and other worlds from a rogue’s gallery of evil alien races, the mutated Grineer, the robotic Sentients, and the undead Corpus. Here, humanity’s guardians are called Tenno, a group of enhanced warriors bred to pilot Warframes. These titular devices are personal combat suits worn by the Tenno, and come in a variety of different configurations.

Essentially, the Warframes replace the classes, races, and even genders that other RPGs allow you to customise. Each Frame is very different to the last, and they come not only with unique appearances but also with four unique skills. You won’t need to level the skills up individually, but you do level everything else you use as you use it. The Warframes themselves, melee and ranged weapons, and companion drones will all gain XP with use, which creates a gestalt character level called Mastery. As your Mastery Rank increases, more weapons, Warframes and missions become available to you. In order to achieve a higher Rank, you’ll have to pass a test each time which, if you fail more than once, won’t be available to try again for a short while. Make no mistake when going in: it’s very sparse with dishing out lore and context, and is very light on hand-holding. After the initial (very brief) tutorial mission, you’re pretty much on your own aboard your ship. The first few quests will lead you around looking for modules to get your ship back on track. You’ll need to find the crafting and modification modules, the store module, and various other essential components before you’re set free to grind missions and work towards meeting the criteria required by Junctions.

In order to travel from world to world, you’ll need to unlock a Junction by completing a checklist of activities. These activities will usually include finishing at least one mission, defeating a certain number of enemies, finding hidden scannables, and achieving particular milestones. Within the Junction itself, you’ll face an enemy Warframe outfitted with a full suite of skills and abilities. Each of these fights can be taxing, but are more enjoyable than some of the tougher boss fights in the missions proper.

In order to build more Warframes you’ll need to go down one of two routes: either you can purchase Platinum from the store with real money, or you can farm for the blueprints and materials and then build the Frame in your ship’s Foundry. The only thing you have to pay real money for are cosmetic enhancements. No weapon, gadget, tool or Warframe can’t be built or found within the game, which is a testament to the fairness of Digital Extremes’ free-to-play model. In fact, you can even farm materials and trade directly with other players for Platinum, meaning you can earn the premium currency without spending a single penny. A large portion of your time will be spent in missions, and missions mean combat. More than anything, a Warframe feels like a wearable weapon. While the minute-to-minute fighting is always just enough of a challenge to feel worthwhile, it also carries a genuine sense of power as you cleave and blast your way through hordes of enemies. Melee combat is just as viable as ranged combat, but combining both and mastering the nuances of movement such as the wall-run, double jump, slide, bullet-jump and dodge roll results in a combat experience like no other. Learning the best way to use each Warframe’s skills is essential, too, as some are designed for heavy offense, others for support, healing or stealth.

The three starter frames, Excalibur, Mag, and Volt, offer a decent variety to suit most playstyles, but it won’t be long before you set your sights on the first one you want to build. For me, this is always Rhino, a heavy-hitting Warframe designed around tanking, but you may want to look towards acquiring blueprints for stealth Frames like Ash and Ivara, or some of the weirder builds like Octavia or Limbo. The beauty is that if you’re willing to invest the time, you can play however you want to.

This is not a game to rush through. It’s vast and dense and filled with things to explore. At a certain point you’ll reach a central hub, where you can seek out clans, or head out into the Plains of Eidolon, a vast, open-world area populated by roving gangs of enemies, NPCs and towering, screen-filling Eidolons to hunt. You’ll build and use the Archwing, a device that allows you to take part in deep space dogfights and navigate through fields of debris. You can embark on bounty hunts, or indulge in PVP in the Conclave (although this is far from the focal point of the experience). It’s also worth noting that most of the game is achievable solo, although grouping with other Tenno not only makes things like boss fights and Archwing missions a little easier, but turns any combat mission into a furious ballet of blades and bullets. If anything lets it down it’s the sense of bewilderment that greets new players. Few things are explained at length or depth, and elements like modding (applying collected Mod cards to armour and weapons to alter the stats) are often the domain of veteran players while newcomers scratch their heads in confusion. Though, it’s worth noting that the community is not only aware of this, but is also one of the most warm and welcoming communities you’ll find.

The Switch version more than holds its own alongside the others, though it’s a shame only PC users can transfer their accounts at this point. Digital Extremes have said “Never say never” to the PS4 and Xbox One communities, but it’s probably not worth holding your breath. Those coming in to Warframe on the Switch are joining at the best possible time, with a new title update due in the next few months (the Fortuna expansion is already live on PC) and a massive amount of content to get stuck into from the off. Expect a deep learning curve, but know that if you stick with it, the end experience is more than worth the grind.

Switch version is not as pretty as others
Very dense universe

Warframe is a fantastic sci-fi shooter with a very consumer-friendly business model and a ton of free content.