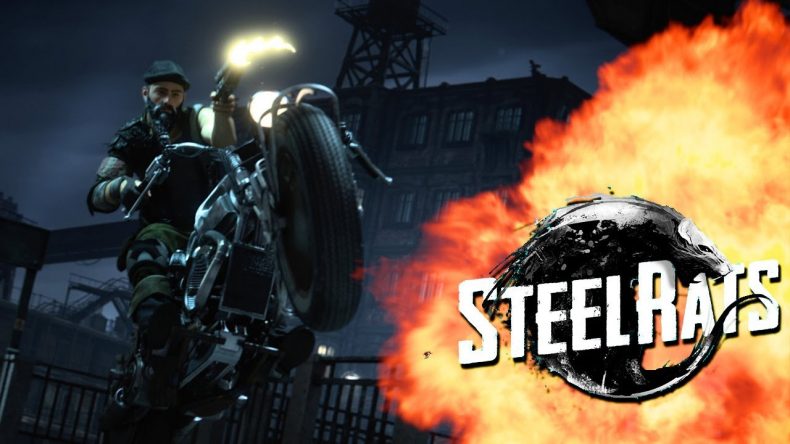 Before now, I would have bet good money that nobody who played Trials HD (or any of its wonderfully challenging follow-ups) ever thought, “You know what? Mix this with Sonic the Hedgehog and you’d have a cracking game!” Strangely though, it seems that some oddballs at Tate Multimedia must have been mad enough to think just that.

You play as Toshi as he searches for his fellow Steel Rats, after he discovers something very interesting in one of his scrap gathering missions. Although the Trials reference may have given it away already, I should probably mention that Toshi and the Steel Rats are a biker gang, and the entire game is played out on the backs of their bikes. Nothing new there, right? Thing is, this is still a side-scrolling platformer complete with a jump button, which is where the Trials-meets-Sonic comparison comes into play. It’s a bold move and one that mostly works. Steel Rats takes place in a sort of post-apocalyptic, industrial future where robots have taken over and humans aren’t really thought of very highly. The Rats use their bikes to outrun the machines and to gather various bits of scrap to repair and maintain their equipment, with Toshi using his genius to invent new ways for them to fight back against their mechanical overlords. Although if I’m brutally honest, the plot makes no difference. There is plenty of depth if you want it, with backstories and lore found via secrets dotted around every level (quite well hidden in many cases, too), but the overall story is essentially a vehicle (see what I did there?) for over-the-top chase sequences, and an excuse to blow things up. Steel Rats does both of those things quite well, though not without a few stumbling blocks.

The biggest of those is the camera. For the most part, it keeps everything on-screen that you need to see, but at speed? Not so much. Like the Sonic games, jumps and sudden drops can sneak up on you because the camera doesn’t quite let you see far enough ahead. I lost count of the number of times a Rat fell to their death because I had no way of reacting in time to jump that gap, or to move to the correct plane to avoid an oncoming train with split-second timing. Reckon I’ll have flashbacks of that train section for quite some time. Those planes are where Steel Rats differs to Trials, as you can move in and out of the screen, so to speak. This is essential to traversing up and down staircases as you move through the levels, with a quick tap of Circle allowing you to switch direction. Double tapping it spins a full 360 degrees in an attack move, to help fend off those pesky robots that inhabit each level. It almost feels like a Streets of Rage style brawler at times, when you find yourself surrounded and having to fight your way out of a makeshift arena. This isn’t exactly the game’s finest feature, especially when it begins to introduce bigger and tougher machines that need more and more of a beating to take down. It highlights how awkward the combat is, but it rarely lasts too long thankfully, allowing you to be on your way again, enjoying the simplicity and fun of the movement.

As you progress you’ll unlock new upgrades for each character’s bike, allowing them to use special abilities, increase their speed, and various other things. These are unlocked through completing objectives and score targets within each level, which adds a certain amount of replay value to the game, but you’ll rarely find much call to go back. I unlocked almost everything I needed without completing these objectives a lot of the time, but completionists might enjoy the extra reasons to return. Steel Rats is certainly an interesting prospect, with some decent platform gameplay mixed with inertia-driven vehicle movement, and it’s all played out to a stunning soundtrack. From the Blade Runner-esque menu music, to the hefty grunt of the bike engines, this is a game best played with headphones – or a nice speaker setup, if you have forgiving (or hard-of-hearing) neighbours. It’s an innovative game that tries something new, which does work the majority of the time. At worst, it’s a little awkward and frustrating, but at its best Steel Rats is a satisfying adventure that will keep you entertained for hours.

Mixing Sonic-style platforming with Trials-esque, inertia-driven gameplay, Steel Rats is a bold and often fun concept, but some awkward level design holds it back from matching the quality of its inspiration.