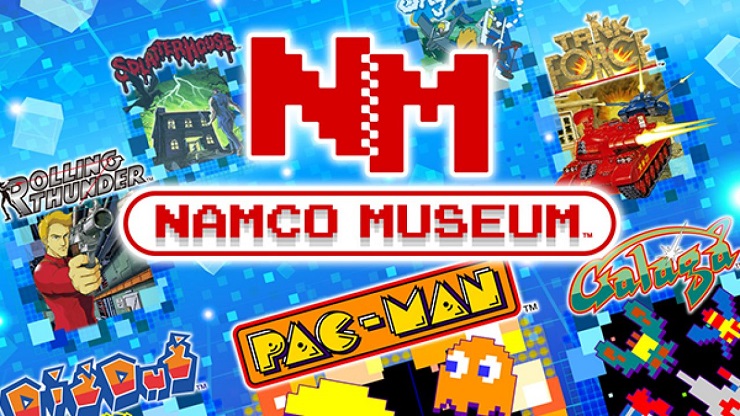 Retro game collections on consoles aren’t a new concept. In fact, the Atari Classics collections for PS4 and Xbox One are just recent retro or classic game collections for consoles. Bandai Namco Entertainment (Well Namco at the time) released the Namco Museum series of games on the original PlayStation celebrating their history, and they have gone on to release a version of Namco Museum for various platforms ever since. Now the Nintendo Switch gets a piece of the pie with Namco Museum for Nintendo Switch that collects 11 games into a single package.

I haven’t owned one of these since the original PlayStation, and while I’ve played through some of the games here recently through ports and the Galaga version in the beginning of Tekken 1. It has been great revisiting some of these games and discovering the others I had never played. The games included here are PAC-MAN, Galaga, Galaga 88, Splatterhouse, The Tower of Druaga, Dig Dug, Rolling Thunder, Rolling Thunder 2, Sky Kid, Tank Force, and finally PAC-MAN VS. PAC-MAN VS. even retains the Mario announcer voice which is great.

I had never played Galaga ’88, Sky Kid, Splatterhouse or The Tower of Druaga until this collection. As a kid I spent a ton of time playing PAC-MAN and Tank Force. Discovering Galaga ’88 after having only played Galaga was great. If you’re wondering about the quality of the games included here and have never played any of them, there’s a lot to love. This collection is targeted mainly at older people or parents who want to get their kids into some classics for sure, but as a collection of games, it has some great quality. I’d say The Tower of Druaga, Splatterhouse, and Sky Kid are the only games that weren’t much fun. The Tower of Druaga is the Altered Beast of this collection for sure. I wish I could delete the rom from the collection. As for the emulation itself and the overall experience, the developers have done a great job. There are tons of visual options for screen sizes and orientations. I took full advantage of this to set up the Switch in TATE mode and use a single joycon to play PAC-MAN just like it would look in an arcade cabinet. There’s also a scanlines option if you want to go all the way. Outside of visual settings, You can adjust difficulty, lives, and more depending on the games. There’s also a very nicely implemented HD Rumble option. I usually get tired of these things quickly, but the way the HD Rumble and sound effects work together is great.

Sound is a big part of emulation and as far as I can tell, they have nailed that bit here. The menu sound effects even change depending on the game you’re currently playing which is a nice touch. I’m not a fan of the main menu music loop though, but that’s a minor complaint. PAC-MAN VS. is something I never got to experience before. The setup to get it working with a GameCube, a GameBoy Advance, and a Link Cable sounds almost as bad as the voice chat setup on the switch for in game and chat audio together. There’s a free app you can download on the eShop and play PAC-MAN VS. on two consoles with up to 4 players with a single owner of the game using 4 Joy-Cons. This works great and was a big surprise for me.

The big complaint I have for the collection besides the lack of certain games or the price (it is overpriced in the UK compared to other regions) is how unresponsive the menus feel sometimes. While the games themselves run great, the menus lag randomly. Even the pause menu in game takes a few seconds to show up each time. The menus definitely need some more work that hopefully happens in a patch.

Namco Museum is the first of its kind on the Switch. While the SNK classics are all individual purchases, this collection brings together 10 retro games and 1 surprise in a single package. It would be an easy recommendation for anyone had the pricing been sorted. I was also hoping for the inclusion of Mappy and Ms. PAC-MAN. I hope this is the start of Bandai Namco Entertainment releasing Namco Museum volumes on the Switch store because playing these classics in TATE mode is a joy.

Most of the games are great
HD Rumble is well implemented
Tate mode with a stand is ace
PAC-MAN VS. is a fun surprise

The Tower of Druaga
Some unresponsive menus

Namco Museum is a very good collection of some arcade classics that is let down by its asking price and two of the games included.