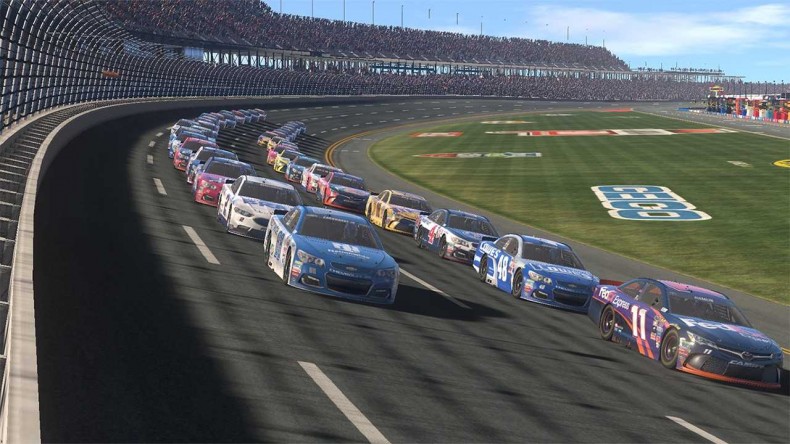 Outside of the US NASCAR will always be a tough sell. Without the race day atmosphere beside the track, the smell of burning rubber and exhaust fumes, the roar of 800+ horsepower engines drowning out your own thoughts, it’s essentially watching fifty-odd cars driving around an oval for a few hours. Even die hard petrol heads will struggle to find that interesting, when watching it on TV.

Even in video game terms, the NASCAR games haven’t exactly set the world on fire. The last major release was probably EA’s NASCAR ‘09 (if you don’t count this year’s NASCAR expansion for Forza Motorsport 6, or its inclusion in Gran Turismo 6), but the licence expired after that and eventually ended up at Eutechnyx, where it stayed until this year, when Monster Games took up the mantle. Featuring all 23 tracks from 2016’s NASCAR Sprint Cup Series (plus a couple of regular tracks like Sonoma Raceway), this new game offers one of the most comprehensive and realistic representations of the motorsport to date. Each oval feels genuinely different, with varying turn-in speeds and corner angles, meaning that you really have to judge your speed as you drive around the bends. Speedway tracks are incredibly narrow and tight-cornered, meaning you need to brake hard before turning, and getting that right while avoiding the mass of cars offers more of a challenge than you might expect. Make no mistake, this game will dispel the myth that NASCAR is nothing more than turning left while keeping the accelerator pressed firmly into the floor of the car.

The sheer size of the grids is comparable to those of the real thing too, with 40 cars on screen at once, vying for position on an already narrow track. The AI is reasonable on your fellow racers at least, although it has a tendency to shunt you during practice if you’re in their way. Luckily it doesn’t happen much in actual races, which is quite impressive given the sardine-like nature of the packed grid. This doesn’t mean that collisions don’t happen in the race, quite the opposite really, as the close-quarters racing means that trading paint is inevitable. Cars will bump into one another as they fight for the best driving line, or when they’re three wide and closing in on others ahead, but it feels fair. Where the physics do feel a little unfair is when contact leads to slides, as the AI rarely loses speed as it tries to correct itself, but the same cannot be said of the player. While this may be rare, it’s quite frustrating nonetheless when the car in front spins its wheels up to create an impressive cloud of tyre smoke, but you still can’t pass them despite your smooth line and full acceleration. It does go wrong from time to time, and that impressive cloud of tyre smoke turns into a full-on wall of fog that gives Dark Souls a run for its money. Cars spin out and collide with one another, creating huge pile-ups that can either give you some breathing space if it happens behind you, or can cause serious problems if it happens ahead of you. You just have to keep your foot to the floor and your reflexes sharpened, just in case.

It’s just a shame that the visuals can’t match the spectacle the tyre smoke provides, as the game looks about as functional as possible. It looks like a game from last generation, which makes the framerate issues all the more baffling. Without the rear mirror switched on, NASCAR Heat Evolution runs at around 40-60fps, dipping a little when the full grid is visible. Switch the mirror on though, and there is an instantly noticeable drop to below 30fps even when the road ahead is clear. Playing in cockpit view will always have the mirror on, meaning that you’ll never have a smooth framerate if you play that way. This may be understandable if the cars were highly detailed and displayed full damage, but there’s barely any damage modelling in this game. Sure, your damage indicator will tell you when something is broken, but your car will only really display minor body warping, maybe a bit of smoke if the engine goes. The majority of your time will be spent in Career mode, in which you can create a basic driver (even a female for a change, something that many sports games omit) and attempt to reach the top of the pile. And you really do start at the bottom, you don’t even have a sponsor until you finish in the top 30 in your first two races. Once you gain a sponsor, your aim is to build up your own team using the winnings you’ll earn during races. Don’t expect to be winning races from the start though, you’ll be fighting for scraps at the back of the grid during your first season, saving money for upgrades to your car and garage in order to improve performance and earnings as you progress. As nice as it is to have a more realistic progression system in a racing game, a bit of speed would also be appreciated, especially when you’re still fighting for a place in the top 20 after several hours of gameplay. It can be a bit of a grind.

Getting to the top would be a more fun process if your opponents didn’t display symptoms of the dreaded rubber band AI, constantly catching up to you at unrealistic speeds even when you’re well out of drafting range. Luckily this isn’t something that can happen in multiplayer. The online game is surprisingly fun when you get a game, with grids of up to 40 players, but it really does suffer from a total lack of punishment for cheaters and trolls. And they are many. From driving the wrong way to simply side swiping you and putting you into the wall, these players plague almost every online race and don’t face any consequences, which is frankly unacceptable. The game even offers “no rules” online lobbies, but when the normal lobbies don’t punish cheaters, this seems pointless. It’s such a shame, as it spoils a surprisingly fun online racer.

Despite its many flaws, NASCAR Heat Evolution does offer an entertaining reproduction of the motorsport, albeit with a little more excitement for non-fans. You have to question its longevity for those non-fans though, as it’s still driving around an oval again and again and again.

With its 40-car grids creating exciting racing, NASCAR Heat Evolution is surprisingly fun, but is unlikely to appeal to anyone but fans of the sport.