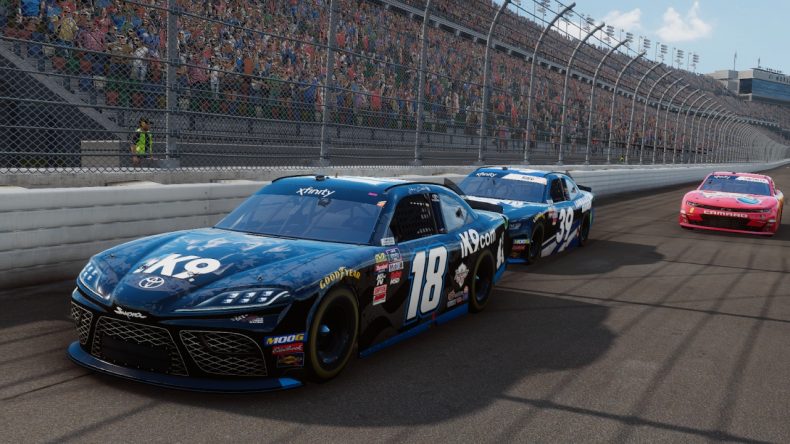 The NASCAR Heat games are fascinating to me. I’ve never really been able to get into the sport, and even though the games were rather flawed, they held a certain charm. I enjoyed them, kept wanting them to fix the flaws that held the series back, but nobody seemed to listen… until now.

I’m not sure why it took until the fourth attempt for Monster Games to give its series the overhaul it desperately needed from the off, but better late than never. The visuals and general performance are way better than before, as is the handling, which is fully tweakable for your preferred driving style. The career mode, previously a real slog as you were forced to sit through countless menus before you would even get your first race, now offers the ability to start at whatever level you want. Even if you do start in the Xtreme Dirt Tour that makes up the bottom rung of the career ladder, you’re in races much more quickly. You occasionally still have to sit through menus, awaiting a race, but the Hot Seat offers come in far more often. I’m getting ahead of myself though, aren’t I? Yes, it’s great that these changes have been made, but you’re probably wanting to know just how much they affect the gameplay and graphics, that kinda thing. Well, let’s start with the most important thing: the on-track action. In the previous games, the handling was fine but simplistic. No particular realism, like they were connected Scalextric-like to the track. In Heat 4 the cars feel more like the metallic beasts they should be, an unpredictable handful that you’ll sometimes need to wrestle into line. Don’t get me wrong, this isn’t a Gran Turismo or Forza Motorsport, or even a GRID, but the difference between each class of vehicle in NASCAR Heat 4 feels more real than it ever did before. The Gander Trucks are heavy but manageable, being the new entry class to oval racing on asphalt, but they’ll still struggle for grip when you push them to the limit. It’s not full simulation, but it strikes a decent balance between realism and fun. It’s genuinely enjoyable to chuck the Dirt Tour cars around the muddy and dusty tracks, like a super-high-powered speedway event, managing the throttle as the back end slides out in the corners. So much fun, almost to the point that I didn’t even want to move on to the asphalt classes.

Moving onto career mode, I did indeed move on to the asphalt classes, after spending a season in the Xtreme Dirt Tour championship. During that first season, I was given several options to change team at the end of the season, based on my performance. Instead of signing a new contract however, I decided to take a chance on starting up my own Gander Truck team with the money I’d earned. This is a nice feature, something that is showing up in most racing games now, especially licensed ones like this. I spent a little time hiring and training an engineer, to ensure that my truck would be as good as it could be. As I had done a good job in the previous season, I had a bit of extra money to bring in another engineer and train them. This meant that my car could perform better, but it was still a struggle at the beginning. I would only just qualify a place or two from the back of the grid, then fight my way up a couple of places. When played with the adaptive difficulty switched on, it really isn’t an easy ride. Exactly what you would expect, when a newcomer sets up their own team. The problem here, though, is that it soon becomes very videogamey. Your team/car has three areas on which to concentrate: engine, aerodynamics and suspension, all of which are worn down during each race. Their bars will drop, then some will go back up depending on your performance in the last event, but it feels random. It feels like your car is almost always a little underpowered; even if you spend money upgrading the maximum ability of both car and team, it rarely does you much good. This is, in part, because you need more than one car. There are several kinds of track in NASCAR, such as short tracks and road courses, and some cars just won’t perform well on the “wrong” type of circuit. Of course, you will have to earn the money to buy these cars, then hire/train new engineers to work on them. Not to mention the money you will need to sink into upgrading the cars themselves. It’s a costly process, so you best get to racing.

Racing is where you will spend most of your time in NASCAR Heat 4, and for the most part it’s good fun. In career, the adaptive difficulty will use your last performance as a base for the challenges presented in the next race. It will also take into account your relationship with other drivers on the grid. Sometimes this ends up feeling a lot like rubber banding and can be quite frustrating when you’ve worked so hard for a result, only for the AI to suddenly double its speed to overtake you on the last corner. This is a shame, because most of the time it generally gives you a good, fair race. The regular difficulties don’t employ this tactic, instead offering a balanced challenge for a range of skill levels. Find the right one for you and you’ll find yourself in some fantastic scraps for position. Back in career, the adaptive difficulty ends up being problematic, especially because drivers will react to your driving, between races. They will complain if you collide with them, regardless of whose fault it really was, and you can choose whether to apologise, provoke or ignore them. Apologising will placate them, but provoking or ignoring them will cause the relationship to deteriorate to the point of causing rivalries. Rivals won’t hesitate to knock you about, sometimes even ruining your race altogether. It’s a nice idea, but it gets old quickly and its implementation just doesn’t work well. When you are out racing, the step up in visual quality is impressive. Cars no longer look like they’ve come from a mid-tier PS3 game, instead being nicely modelled, inside and out. The livery textures on the vehicles are sometimes a bit pixelated, but nothing too major. The major enhancements come in the form of the much-improved track (and trackside) detail. From the crowds and trucks that fill the ovals, to the dust and dirt kicked up at Dirt Tour tracks, it’s a huge step up over the last game.

Everything is a huge step up. This is why NASCAR Heat 4 is the game that all previous games could have been, why it’s the game that I would recommend for any fan of the sport. It won’t convert anyone that already dislikes NASCAR, but even those people could find some fun here.

NASCAR Heat 4 still has its issues, but Monster Games’ long overdue overhaul finally makes this the game that the series has always tried to be.