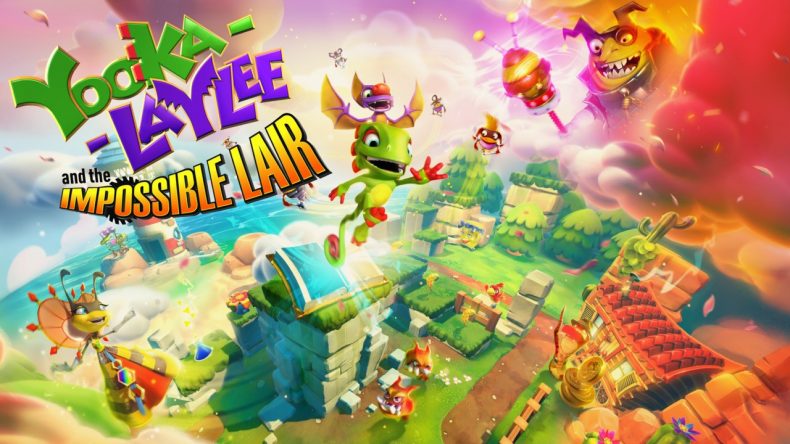 You know those video games that make you happy? Like, really happy? The ones you play when you’ve had a rough day at work, or if you’re sat in front of the TV and decide that the only thing you want to do is is jump into a game that you know you’ll find solace in. That kind of game. If you’d have told me at the start of the year that Yooka-Laylee and the Impossible Lair was going to replace FIFA as my digital comfort food – as the game I stick on to switch off from the world – then I’d have laughed heartily in your face and called you a fool. But after giving my all to Playtonic Games‘ latest offering, I can honestly say this is one of the best games I’ve played all year. It’s like a cold beer on a hot summer’s day, or a big hug when you’re feeling down: I can’t stop playing it.

And it isn’t a singular thing that makes it such a fantastic 2D platformer, rather, it’s a whole bunch of simple features that open up the game to be more than a bunch of levels and collectibles. It’s the overworld that you explore, looking for new Tonics, collecting T.W.I.T. Coins, and meeting loads of weird and wonderful characters. It’s the refined controls and the variety of level design that makes each one both a challenge and a hoot to play. It’s the humour; the colourful environments; the thrill of collecting the quills, and the way Yooka and Laylee work together to overcome their enemies. The gist of the story sees you tasked with rescuing Queen Phoebee’s Royal Beetallion Guards in order to give you more protection in the Impossible Lair: a fiendishly difficult level that you can access from the start. Although some people will overcome Capital B’s maze of insanely tough dangers, playing through the rest of the levels is imperative for those of us that need a little help from your friends. Plus, the 2D levels are so good that you’re going to want to play every one.

Every level has a vast number of challenges to overcome: big spiders; spinning blades; lasers; moving platforms; turrets that spit fire, and a whole host of other crazy enemies. They mix up the gameplay so you can be running away from dangerous obstacles or jumping over them, reaching seemingly unreachable platforms, and using precision to get to those T.W.I.T. Coins Trowzer (the snake) loves so much. Each level has five to collect, so searching every inch of the map can result in finding one of them, and even if a hidden area doesn’t give you one, you might find a neon feather that spits out loads of Quills – the game’s currency.

The controls aren’t complicated, but learning to use them effectively is the difference between success and failure. You can use a roll to take out multiple enemies and gain a bit of momentum before jumping over a chasm, and when in the air you can spin which allows you a brief gliding opportunity to get to those hard to reach platforms. If you get caught by an enemy or a projectile, Laylee will fly off, leaving you vulnerable as you won’t be able to glide anymore, and if an enemy hits while you’re without Laylee, you’ll return to the last checkpoint. Running past a Laylee Bell will bring her back, but they aren’t always readily available.

You can break boxes to score some Quills, but it’s always worth checking before you do as they can also be climbed on to reach collectibles. Gears with green neon logos can be found in boxes to use as a key to cages that might house a T.W.I.T. Coin, and other items like springs and plant bulbs can be found to aid you in other ways. Movement is so refined that it feels like a dream to control. Although the difficulty ramps up later on, the balance between the challenging level design and great controls means you’re never left struggling for too long.

In the overworld, you get to explore every nook and cranny. The top-down 3D design adds a pleasant change from the 2D levels, and offers plenty to see and do. There are tons of secret passages and hidden items, and sometimes you’re required to interact with the various oddball characters to find out how to get to certain areas. Different kind of bombs can be picked up to destroy rocks, turn small flowers into big bouncy ones that launch you onto higher platforms, and there are also ones to rid various flora away from unreachable places. New areas are blocked by a locked gate, and in order to open them you must submit your hard-earned T.W.I.T. Coins to that cheeky Trowzer Snake in order to move on. You can also spend your Quills on new Tonics that can help you in the levels, provide more of a challenge, or give you a random visual effect that adds some great filters to the levels.

The best feature in Yooka-Laylee and the Impossible Lair is the secondary levels that can be unlocked when you interact with characters or objects in the overworld. For example, there’s a point where you have to find two fan blades so a huge grate with eyes can start blowing out air. Both parts are found in cages, but you spend your Quills to open them. Once you fix the sentient fan, it blows air into one of the levels, meaning you can jump back into the same level, except this time it has been restructured to provide a completely different experience. Other changes that can be made include freezing over all the water in a level, flooding one, and releasing swarms of angry and bitey creatures that are a pain to avoid. The world of Yooka-Laylee and the Impossible Lair is beautiful. Bold and bright colours, various biomes, secret areas, and exceptional world-building that is both vast and entertaining. It’s extremely funny for both children and adults, with fun jokes that lightly poke fun of the game and characters, as well as humour that lifts the mood through the actions of the enemies. Musically it shines, too. There are bouncy tracks that fit in with the playful nature of the game, and incredible eighties-inspired music that was surely put in to please the grown-ups.

Yooka-Laylee and the Impossible Lair knows exactly what it wants to be, and succeeds in every way. The overworld is much more than a filler between the levels, and the ideas that make these levels so entertaining always keep you playing. The gameplay is refined, the world is polished, the humour is spot on, and if you weren’t sure about playing this before reading, I hope you decide to give it your time. Not only is it one of the best 2.5D platformers this year, it’s one of the best side-scrolling platformers of the century, rivaling Nintendo’s own Donkey Kong.

Some puzzles are too simple

Yooka-Laylee and the Impossible Lair is one of the best 2D platformers available. If you're looking for something filled with refined gameplay and fun levels, this is it.