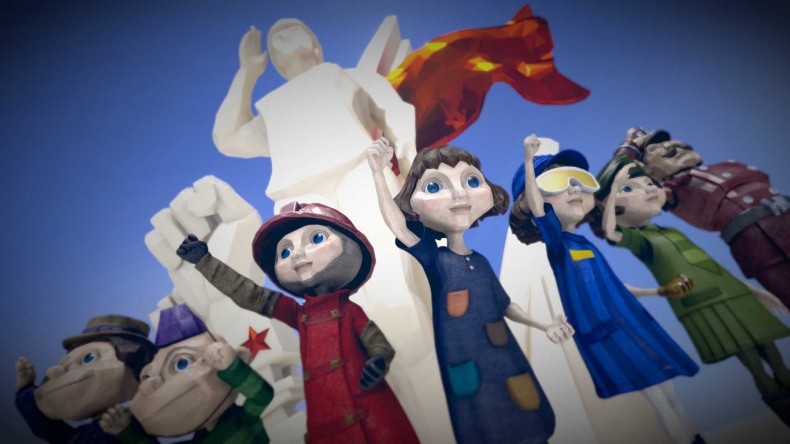 In a world as bland as The Tomorrow Children’s, keeping busy is key. Mining, collecting and fending off giant Godzilla-like beasts are what keeps your little town running, but it is hard to stay enthralled with such chores as an awful gameplay loop emerges, tightening around your neck like a surprise noose. While these activities are a novelty to start with, it’s hard to feel like you’re actually contributing anything to the success of your home as they become tiresomely repetitive.

Set in a colourless expanse known as the Void, The Tomorrow Children casts you in the role of a Comrade — a projection clone that is expected to work tirelessly to restore human civilisation after a disastrous Soviet experiment wiped out the population and turned the world into a desolate landscape. Some of humanity has been somewhat fossilised by this Void and appear in the form of Matryoshka dolls, which the player must rescue from islands — landmasses which appear out of the Void littered with resources — and return to their township. Doing so sees them transformed back into villagers, who you must sustain through the collection of raw materials from the various islands. As an always-online title, towns are manned by Comrades who are trying to restore them to their former glory. Constructing a residence in the town allows you to build new facilities such as a Town Hall or electricity-generating treadmill to keep your hamlet powered during the night. Expansion is achieved by collecting enough materials from the emerging islands and returning them to the town to be used in new construction projects or a variety of upgrades. A town is deemed complete once it has achieved all of the possible Monuments — achievement-like statues that are gained when certain quotas are met — and all villagers are living happily.

Comrades are rated by their Toil level — how much work they have done for the town, and how much it has benefitted the town’s advancement towards completion. Virtually all tasks carried out by the player will have some sort of Toil rating attached, from loading materials onto the bus that transports Comrades to and from the islands, to praising or snubbing fellow players for their actions. You are able to cash in your Toil at the Ministry of Labour, gaining a varying amount of Ration Coupons depending on your hard work, which can be spent on mining equipment, weapons, outfits or licences. The artistic direction behind The Tomorrow Children is fascinating, and the world constructed by Dylan Cuthbert and his team at Q-Games is truly unique. For the first few hours, it is so enjoyable to explore this alien concept — visiting the oddly-shaped islands, fighting off the monstrous Izverg invaders and testing out the kinds of facilities on offer within your town. It is unlike any other game I have ever played before and presents a genuine atmosphere of communism at work: all players working towards the same goal, sharing resources and equipment to aid the advancement of their town.

This arrangement of a Communist-esque society may intrigue some but put off others. While working on islands, game etiquette entails rescuing endangered Comrades, sharing pickaxes and torches with less fortunate workers and allowing others to claim your discoveries of Matryoshka dolls for themselves. It is entirely possible for players to experience The Tomorrow Children without doing any sort of work at all — they can shadow their fellow workers, claim their prized dolls and restore them back in town for a large amount of Toil, ultimately stealing their reward from the battered, swollen hands of others.

It can be an infuriating system at times, as having no control over the behaviour of your coworkers can result in a rather disjointed effort. Many players become preoccupied with collecting resources and transporting them to the town, seemingly ignoring the imminent threat posed by approaching Izverg which have the ability to level your home with their devastating attacks. I suppose this is a foreseeable hazard of working with an online community of strangers, but being aware of this issue does not make it any less irksome.

Unfortunately, The Tomorrow Children is ensnared by its own ingenuity — an array of confusing gameplay mechanics are thrown at you, never really explained in any great detail. The activities involved in the town-building, while seemingly rewarding to begin with, quickly become repetitive and, with so many other players working alongside you, it is hard to see the impact that you are personally having on progress. While there is a fascinating and ambitious concept embedded at the heart of The Tomorrow Children, it feels as though it has not evolved enough from the beta trials to become a truly inclusive game that players will cling to. I just hope my predictions are wrong when it launches as a free-to-play later this year.

A totally unique concept
Fascinating in-game world
Enjoyable, for a while

While there is a fascinating and ambitious concept embedded at the heart of The Tomorrow Children, it is debilitated by its own confusing mechanics and repetitive gameplay loops.