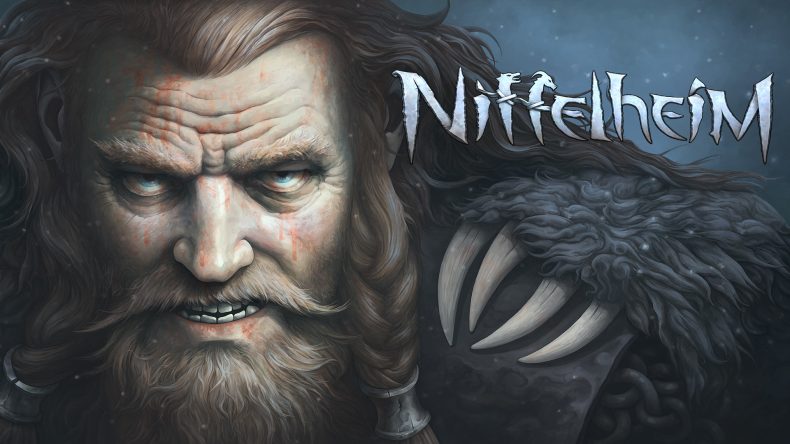 At a glance you’d be forgiven for thinking Niffelheim was a standard 2D action-RPG. It walks like one, talks like one, features muscly, bearded Viking brawlers and heavily be-cleavaged Valkyrie warriors like one. But in actual fact, it has more in common with games like Ark: Survival Evolved.

It all begins with your chosen hero (and there are four to pick from) being killed stone dead and waking in the ghostly, foreboding land of Niffelheim. Your quest from here on is to find 22 pieces of a sacred relic that will free you from the realm of the dead. You start off beside a tumbledown barrow where a fortress once stood and might once stand again, and around you there’s an abundance of resources to pilfer: tress to cut down for timber, twigs to gather, bird eggs, herbs, stones, and animals to hunt for meat and hide. It being 2D might throw you at first, but Niffelheim is a survival game first and foremost.

Entering into the barrow you’ll find an underground network of caves with more decrepit facilities waiting to be repaired and upgraded: a forge, a sawmill, a kitchen, an alchemy station. And below, miles and miles of mines to excavate and explore. Building up these facilities will allow you to craft tools like pickaxes, arrows, wooden planks, and doors that you can install in the mines to allow you to climb up and down its levels. When the night falls, packs of skeletons will rise on the surface and attack your little base, which can be upgraded and outfitted with defences, as well as outbuildings that help you source food and crafting materials. Everything is finite, and your Viking will starve if not fed, while your equipment will all break with sustained use, even the armour you can craft or find will only protect you for a limited time. You have to have specific items for specific jobs, so you can’t fight skeletons with a pickaxe or woodaxe, even if that’s all you have – which feels a bit finnicky – especially as your unarmed combat is limited to a shin-high kick and a clumsy thump.

Once you’ve taken all the resources from your starting area (again, there are four to choose from, though aside the visual differences they all do the same thing), you can move on, but you’ll need to return to your base to fortify it, defend it, repair your gear, craft new items and recuperate. Death forces you to return to your body to resurrect, and will incur a permanent de-buff until you drink a certain elixir to dispel the ill effects.

Being a survival game, Niffelheim is a mix of intricate systems and rudimentary mechanics. Combat is as simple as hitting attack or block, or switching to your bow to deal damage from afar. You can be poisoned by certain enemies, but the various potions you can concoct or meals you can cook will provide buffs and benefits. Niffelheim is a grim, fairly joyless game from the off. There’s a degree of compulsive fun to be had in what amounts to a highly simplified and grittier version of something like, say, Terraria, but it’s far from bright and colourful. The world is grim, the dangers many, and your first few runs will be marked by struggle. You’re always running out of resources and I spent more time low on health than full of it, though at least you can find certain areas to sit on ancient thrones and heal.

There are dungeons on each map, filled with dangers and traps, but also rare items, resources, equipment and treasures to sell in the nearby town. Delving into these sepulchral caverns is the primary activity in Niffelheim, and are the source of some of the best items you can find – as well as bosses who guard the relic pieces you seek. If you really want a challenge, you can assign AI opponents who are on the same quest as you as rivals.

Despite its intricacies, Niffelheim is a perfect fit for the Nintendo Switch. It looks pretty good on the small screen, and the animations and backdrops are simple enough that the framerate and performance remain steady. It’s not the most charming or exciting game, but it’s a solid adventure in a grim and unforgiving world.

Crafting and gathering keeps you busy
World is well-realised

Niffelheim is a decent 2D survival game that plays it all just a little too seriously to be called enjoyable. It looks pretty good, but the simple combat and finicky systems hold it back.