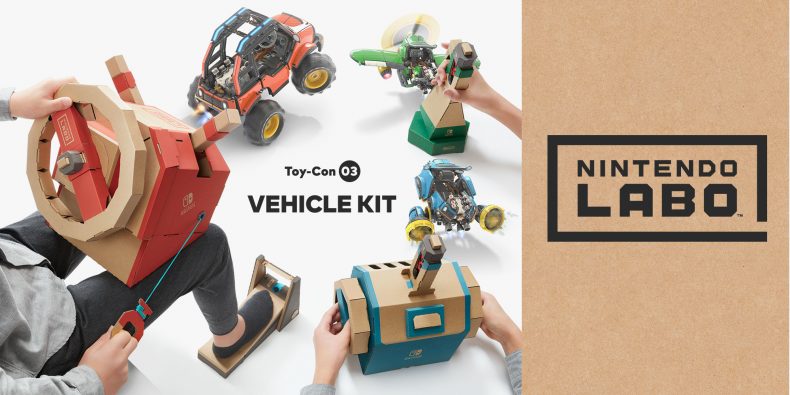 When LABO released back in April it was praised for being an ingenious and imaginative dev kit marrying simplicity and ingenuity and empowering people to create things using basic materials they might very well have lying around. Unfortunately it was hamstrung by a lack of things to do with the items that you could create with them and a lack of variety among the two sets (ironic considering one was called the Variety kit). Now we have LABO Kit 3: The Vehicle kit seemingly to add some much needed drive (ho ho) into the LABO brand, but how does it fare?

Straight out of the box you’re greeted with the usual cardboard LABO templates and urged to get to work, first up is the pedal which is the main driving force (I’ll try not to overuse that word) behind kits in general here. This is a relatively simple construction and doesn’t take long, following this you’ll wind up building a spray can, a steering wheel complete with a reversing lever and two gadget levers, a joystick, a submarine control box and two ‘keys’. You’ll need one of these keys to move between the ‘vehicles’ to activate that particular set, the other key is a spare in case you overuse the first one.

Overall you’re looking at about ten hours or more of building time here and just like playing with LEGO you’ll find yourself amazed how it all links together to turn into the items you create, it’s in this building where the magic of LABO is felt the greatest. Sections of the steering wheel and the submarine controls come on templates that span double the length of the usual cards, and the instructions are animated and worded with the sort of charm you really should have come to expect from Nintendo by now, complete with boops and clunks like an overzealous Blue Peter project. However, it’s once you complete the steering wheel that the game just drops you into a great big, colourful open world for you to roam around at your leisure. Throughout the land are a range of activities for you to do ranging from finding flags to playing golf, although what you’ll find yourself doing is acting like a glorified taxi driver ferrying people to their desired locations. As you roam around you’ll need to keep an eye on your fuel gauge and ensure that you get to a fuelling station before you run empty or the game declare it’s over and shunts you back to the last time it saved.

Once everything is built, pulling the key out of one and putting it into another switches the vehicle on screen to the new one, the joystick puts you into the plane and the submarine box puts…well, you get the idea. The change is virtually seamless. To pass all the challenges in the adventure mode you’ll need to switch the key frequently between all three vehicles, and you’ll find that they each have their quirks.

For instance, the car is the only vehicle that has gadgets, including bombs, sawblades, a radio and the fuelling nozzle; this means that it’s the only vehicle that can refuel. The plane gives you a much better view of the island you’re on and allows considerably faster travel, but at the cost of higher fuel consumption, as a result you don’t get to use the plane very much before you need to turn back into the car to refuel. Finally the submarine has a dial on either side of the unit that controls the direction of the propellers, you press the pedal down and turn the dials to make the submarine go in a particular direction. The submarine is easily the least fun of the three to drive, the constant stop start nature is too fiddly to get to grips with, and once you’ve done all the challenges that it requires, it’s highly unlikely you’ll go back to using it (that’s if your patience lasts that long).

Adventure mode is obviously the main play mode, but there’s nothing really to do in it once you’ve been to all four corners of it’s world, that’s why outside of it you get box car racing, track racing, car fighting and a rally cross mode; none of which are really fun to control for different reasons. Box car and track racing suffer from the lack of a brake so you rely on natural slowing from taking your foot off the pedal. Car fighting is done from a fixed side on perspective and the cars react slowly to turning making it difficult to line up attacks.

Then there’s the frankly awful rally mode, which takes place in the open world from adventure mode, but gives you a course to follow through the individual areas. Unfortunately, the gates you need to pass through only spawn once you pass through the previous gate, and then sometimes the arrows to the next gate don’t show resulting in you driving around aimlessly until time runs out and you need to try again. Seriously, this mode isn’t worth bothering with unless you like to drive by trial by frustration. There’s no denying the ingenuity of Nintendo Labo, I mean, I made stuff out of cardboard when I was younger like the occasional fort or bog standard cityscape, but the LABO designs are incredibly intricate and it’s hard to not be impressed by how everything goes together. The way the gadget levers on the wheel spring back into position, or the way the foot pedal feels sturdy despite being made of cardboard only a couple of millimetres thick, some serious thought has gone into these new LABO designs.

Unfortunately this intricacy works against these constucts as you’ll regularly find some of the inserts don’t hook in properly and keep popping back out of their slots. Panels will open regularly with little pressure applied to the apparatus and other segments just don’t stay connected at all. Compare this to the original variety set which is all still held together (but gathering dust in a cupboard) and while this new kit is marvellous in design it is lacking a tad in overall quality.

It’s a shame that these builds don’t hold themselves together very well because they really could do with having uses outside of the already existing LABO modes. The bike controller from the variety kit can be used with Mario Kart so it’d be good if the steering wheel could as well and the joystick would be great for flight sims, but there’s nothing at all and what the included modes show is that no matter how good the coding lab is you’re not going to be able to create actual games to use these with yourself.

There’s some excellent design work on display here, but it’s just lacking that touch of polish that a finished product needs and while the adventure mode is good it just highlights how little use LABO has outside of its own wheelhouse. Maybe, just maybe Nintendo needs to help developers integrate LABO kits into their games as bespoke controllers, it might be that that finally helps LABO take off.