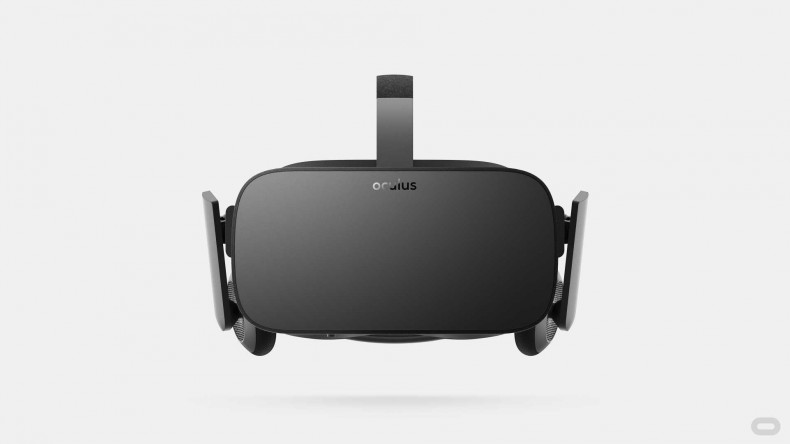 There’s something to be said, these days, for uncomplicated hardware that you can have up and running before you know it. And that’s one of the Rift’s major positives. My initial VR experience was with the HTC Vive, so it was difficult to know what to expect with the, well, original VR headset that started this whole thing off.

A cheaper initial price point and built in headphones means that it is just far simpler to set up. A small sensor on a stand sits in front of you, plugs into the back of your PC via USB and is how the HMD is tracked, while the headset itself also requires a USB3 port and a HDMI output, and then you just plug the Xbox One wireless dongle in (you can wire a pad if you want, but you’d only want to do that if you are seriously low on USB ports), and that’s it – you’re off. It’s just a case of using the Oculus software and store to make sure everything is connected and tracking correctly. There’s an included remote for the Rift, but it seems a bit redundant for gaming use outside of the less-intense experiences that are designed for one-click play, and there the remote makes it friendlier for non-gaming friends and family. But that genuinely is it. That’s it all set up and ready for you to play games with. It’s a stark contrast to the Vive, which requires room scale (more on that, later) set up and jury rigging the sensors to walls somehow, or on tripods – the Rift is just the unobtrusive sensor, a controller, and a headset. Of course it’s all packed in a nice box, attractively packed away with compartments hiding the controller, the Xbox One dongle, etc, but honestly, the focus utterly seems on getting you playing in the quickest possible time. The bundled (attached, but removable if you want to use your own) headphones are absolutely fine, and deliver decent sound at loud volumes; certainly enough to invest you in any game you’re playing, and the fact they are movable means you can quickly ping one headphone away from your ear if you’re trying to listen to people in the room with you.

I think I prefer the Oculus store to the way Steam operates for VR. It may be controversial, but Steam’s incorporation of VR feels a bit messy at times. Oculus don’t have fingers in other pies, so the store is solely designed for the Rift, and is structured in a way that just works. Every game in the store is for the Rift, and every game has a note which tells you how intense the VR actually is, which helps anyone new to the idea get used to it slowly. If you start DiRT Rally as your first game, for example, you’ll almost certainly throw up due to the intensity, so you can plan accordingly and ease yourself in.

Better yet, everything just works. Pick up the headset and put it on, and the interface notices the sensor and turns it on. The in-headset interface has been carefully designed to be friendly for all, and you simply have to look at a game, store item, or whatever, and click it (with the Xbox One A button, or the remote middle button) and it’ll load up, giving you options within. I hate to harp on about it, but it all works so intuitively. Aside from the occasional installation permission, you won’t have to take the Rift headset off once you put it on, and can flit between games comfortably without issue. And this, I guess, means it’s all about the games. Flitting around the store, there’re some big hitters, some known developers, and some games that are clearly quick minigame-like titles that exist because of VR, rather than making use of what VR does so well. Take Insomniac’s Edge of Nowhere, for instance: it’s a gorgeous-looking game that instantly immerses you (a jump scare early on caught me out big time), but it makes absolutely no sense that it’s in VR at all. A third-person shooter, initially it works so well, but then you find a diary item and the camera position (your head) switches from behind your character. Suddenly, the protagonist has gone, so you look around and he’s to the left of you, reading that diary – and it makes no sense for him to do so. You get a flashlight, which you control with your head tracking: it makes sense, until you realise your character has a headlamp on as well, which moves in a similar way. It’s confused: am I the guy, or is he the guy? It’s actually a good game with some nice controls (the looking to aim guns is precise, and feels nice), it has atmosphere and nice visuals, but it could be a console game – it just doesn’t need to be in VR. Driving games, as you’d expect, are bloody intense. I had never had VR-sickness until DiRT Rally, and despite the umpteen hours I’ve played across VR headsets, after one race the intensity got the better of me. It’s a phenomenal experience, but the intensity is genuinely high and having your co-pilot bark instructions at breakneck speed makes you feel like you’ve been playing rally games wrong all those years. Slow and steady, as the rain lashes down and the windscreen wipers thrash in front of your eyes, looking to the right at a cracked driver side window; this is genuinely an experience bettered by VR, and I can only imagine a wheel makes it feel as close to the real thing as we’re ever going to get, digitally.

Games like Hitman GO and Baskhead (a game where you have basketballs thrown at you constantly and you have to catch them in your face, as you’re the basketball hoop) are fun distractions, and while Hitman GO in VR is far better than you’d expect it to be, they’re just that: distractions. Existing PC games like Please, Don’t Touch Anything and Floor Plan are better in VR, but not essential to be played that way, while Galaxy Golf and VR Tennis Online are okay takes on arcade sports, but pretty forgettable. Minecraft is available on Rift, which is a massive boon, but it plays exactly as you’d expect, and because you’ve probably played so much of it already, it’s hard to get used to the headtracking, meaning you often accidentally try to use the right analog stick. Lucky’s Tale is a third person title where you are the camera, and it’s a nice 3D platformer that mixes elements of the 3D Mario games with Crash Bandicoot (a bit), but again, the fun doesn’t last much past a few levels for the experienced gamer.

Interestingly, my favourite title was the VR version of Keep Talking and Nobody Explodes. In case you’re not familiar with it, the controller holding player has to diffuse a bomb (there are lots of varieties of bombs) and your friends have to look up the instructions via a manual (digital, or you can print it if you want). Because VR is inherently solo, there is no way for your friends to see the bomb, so it relies entirely on your description: does it have red wires, how many batteries, etc? This kind of social VR gaming is something I’d love to see more of, because it takes an existing idea and spins it (almost accidentally in this case) in a way that feels unique, yet natural.

I’m barely scratching the surface of the games, of course, missing out EVE Valkyrie, Gunjack, Fated, Elite Dangerous, Final Approach, The Assembly, Chronos, Pinball FX2 (works fine, but better away from VR), ADR1FT, The Vanishing of Ethan Carter, and even Black Hat Cooperative. What I’m saying is that there’re lots of games available for the Rift, and you’ve probably heard of a lot of them. And that, I guess, leads us to the elephant in the room: The Climb. Crytek’s visually impressive mountain climbing sim (sort of) is the strangest game I played in VR because it felt like something was missing: Oculus Touch. You see, while we know that the Rift can do room scale VR with touch controllers, we can’t test it yet. There’s no reason to assume it won’t be identical in style to the HTC Vive, and that games like Job Simulator will come over to the Oculus store (we know it’s coming to PSVR), but it’s a great shame that it’s not out already. Also, it’s really important to note that the Rift’s headset is smaller. To most of you, that won’t matter. To me, as a glasses wearer, it took some doing to get comfortable with. Now, my glasses are quite large, so your mileage may vary, but it’s a smaller space to get your head into than the Vive.

Which leaves us with a difficult product to sum up. I’m a lazy git and I adore the fact I can pick up the Rift headset, put it on and I’m playing almost instantly with no faffing. But I do think back fondly to some of those Vive games that, while gimmicky, felt truly 1:1. I’m torn: I want to play games with a controller, but I want the option of hand-mapped motions with those Touch controllers now. I absolutely adore the Rift. I love how easy it is to just get into and immerse yourself. The store is great, the hardware feels sturdy, and it’s something you can have set up without people even noticing. But until those Touch controllers arrive, we can’t fully know what the Oculus Rift is capable of. For now, it’s my favourite VR experience purely because of the ease of use and, crucially, because it has the best games available. But despite everything I’ve said above, I’d take this review as very much an “in progress” until we’ve tried out Rift’s version of room scale.

Great selection of games.
Very easy to set up.
Hardware is good and sturdy.
Bundled headphones are good.

Lack of 1:1 touch (for now).
Headset is snug for some glasses wearers.

Until Oculus Touch hits retail, we won't know for certain everything the Rift is capable of, but as it stands it has a wide selection of good games, and benefits from being cheaper than the competition and incredibly easy to set up.