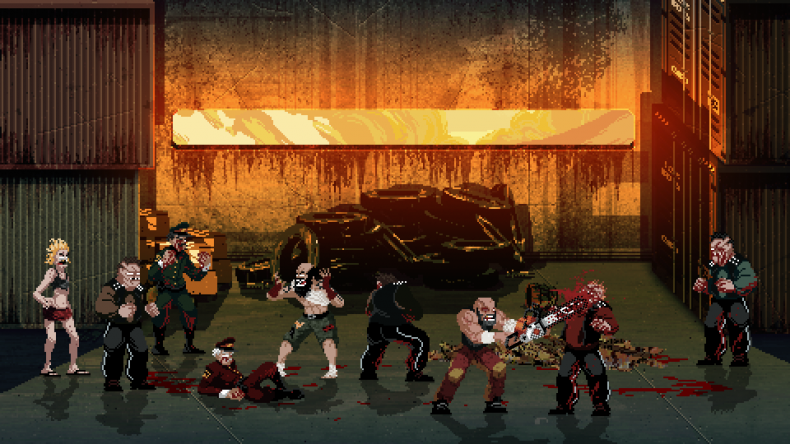 When I was younger and heavily involved in a relationship with my Mega Drive, Streets of Rage was my absolute favourite. I used to do voices for the main characters (especially Adam – he was so cool). Picking up glass bottles and baseball bats, calling in the police for those special moves and facing tough boss battles at the end of each stage, all while creating a story in my head – it was brilliant and I’ve missed that kind of old school beat ‘em up since. Mother Russia Bleeds brings back many of the same ideas Streets of Rage had, except the violence and intensity has been ramped up by an insane amount.

The main story campaign is a hyper ferocious joyride that feels like an 80s action movie, only with plenty more blood and broken skulls. Set in a bleak and savage Soviet Union, you play as part of a group of four street fighters who’ve been wronged by a criminal organisation known as the Bratva. You’re out for revenge and you’ll do anything to get it as you uncover corruption and debauchery at the highest levels. The four playable fighters have different attributes and, dependant on your play style, each one has unique benefits. Sergei is a balanced fighter, Ivan is a muscular beast, Boris is a loose cannon with feral tendencies and Natasha (my personal favourite) is one fast, athletic lady with a spunky attitude. I’ve done some really violent things while playing Mother Russia Bleeds – some horrendous, messed up, uber-violent shit. I smacked a junkie with a baseball bat, knocking him into the path of a combine harvester and watched as he got sliced to pieces. I used a chainsaw to savage a bounty of Soviet officers one after the other, and I beat to death a sexual deviant wearing a pig mask with a condom machine. There’re tons of items to soothe your appetite for destruction, including grenades, baseball bats, beer bottles, bar stools, chainsaws and 9mm pistols; there is so much variety in how you dish out punishment, and the results can be incredibly brutal. Unless you’re familiar with the kind of violence Devolver is known for, it may all be too much, but if you’re like me, Mother Russia Bleeds is pure gold.

There is a varied set of stages that see you take the fight to places like underground raves, prisons and one really screwed up S&M nightclub. Each stage offers a different boss battle and even though most of them aren’t too difficult, there are plenty of ways in which you get to kill them. Without giving too much away, surroundings can come in handy and there’s plenty to help cause utter chaos when used right.

Not only are you struggling against the Bratva, you’re also battling a forced drug addiction and some pretty weird hallucinations. After certain enemies drop to the floor, their bodies start convulsing and you can harvest the drugs pulsing through their veins to keep you alive. Outside of the main story there’s a Survival mode which tasks you with surviving waves of enemies that get harder to beat the further you get; if you reach wave 10, you’ll unlock new drugs to use featuring new abilities or side effects depending on how you look at it. You’ll face a large vareity of enemies in Mother Russia Bleeds. Some use jumping kicks to knock you off your feet, others throw syringes full of drugs at you, and there’re those who simply rely on massive frames and hulking muscles to execute blunt force trauma to every bone in your body. The further you advance, the harder it gets and believe me, it gets harder. Luckily, one of Mother Russia Bleeds’ best features is the easily accessible co-op mode. You can play with up to three mates or a computer-controlled ally to make it easier, although the latter can be a real pain in the arse. The AI isn’t great and they end up getting in the way, misjudging attacks and taking ages to revive you if you get knocked down.

If you loved Hotline Miami, the excessive violence and the seedy world of Mother Russia Bleeds will be a welcome return to madness. The fighting is constant, the stages are diverse and the thumping electronic soundtrack is incredible. It may be similar to games like Streets of Rage and Double Dragon, but it’s a vastly different beast; it’s savage, unrelenting and a whole heap of fun.

A debauchery-fueled beat ‘em up with plenty of ways to cripple your enemies, its excessive violence never overshadows the smart and intuitive combat.