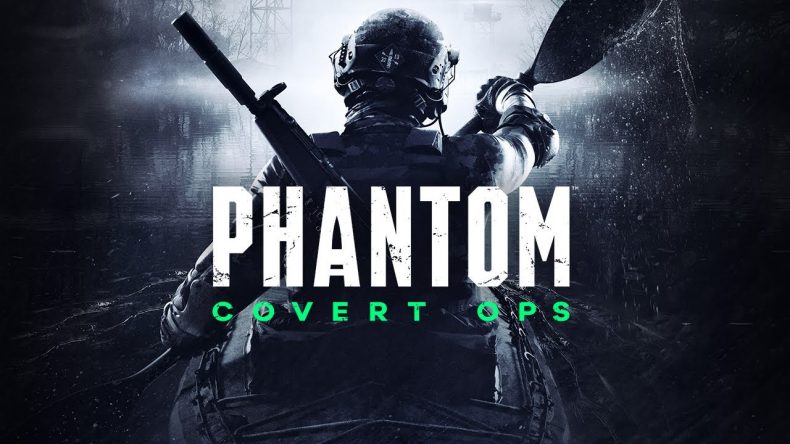 While playing Phantom: Covert Ops from nDreams and Oculus I found myself imagining the conversation leading up to the protagonist’s kayak-based infiltration mission. I had to wonder if they decided to infiltrate by river and then sought out a kayak specialist, or if the guy had that one specialty on his resume and that forced the issue. “I like Braverman for this job, but you know if we send him he’s just gonna want to take the canoe again. Though I guess it’s better than Jones, and his goddamn unicycle.” Having never stopped to do the math on it, I’m just not sure that a heavily armed stealth operative in a canoe would trump a heavily armed stealth operative on foot.

But anyway, that’s where we find ourselves in Phantom: Covert Ops, a game with such a teeth-clenchingly generic title that you’d be hard pressed to even read the blurb as far as “Oh, and the guy is in a kayak.” But he is, and thus you are, as Phantom is also a VR game. It follows the exploits of your nameless protagonist (I’d like to think his name is something cool yet prescient, like John Waterbobbins or Jack Kayakson) who is sent to infiltrate the headquarters of a Soviet madman in possession of nuclear launch codes and yeah, it’s that kind of game, to be honest. The plot is as generic as the title except, well, there’s a kayak. You’d think the developers would have leaned into somewhat, because frankly the actual gameplay is pretty damn good, it’s just so incredibly po-faced. Armed with a silenced pistol, a sniper rifle, a submachine gun and a pair of cool viewfinder goggles, you set off into the long dark river, where you’ll spend the next five hours or so trying to look inconspicuous.

Controlling the kayak is a matter of picking up the paddle and actually rowing, thrusting the oar in the water to brake, hiding in reeds and under bridges for cover, and only shooting people when you really have to. Seriously, you get told off a lot for killing people that your handlers deem as unnecessary casualties, to the point where I started popping heads out of spite. You do get marked down in the post-mission scoring area, so it’s probably best to not follow my example. Which is kind of a shame, because the shooting is great. The guns are accurate and responsive, headshots are guaranteed kills, and there are even explosives you can toss around. Sadly though, Phantom really wants you to sneak by, shooting objects to cause distractions or open gates, and generally keeping your head down. When it does go wrong, you won’t survive long, mainly because of the aforementioned canoe. It’s difficult to dive for cover with your legs wedged inside 16 feet of rotomolded polyethelene.

There’s a ton of content, too. While you can replay all the missions to try to increase your rating, you can also unlock a free play mode which allows you to take any of your unlocked goods into the missions, and another mode that turns the game on its head and asks that you kill everyone in a given mission as quickly and quietly as possible. My only real complaints with Phantom: Covert Ops are around how dark it is. I get that it’s night, but it’s super hard to see your surroundings sometimes. The guns handle well enough, but aiming at anything in almost pitch darkness requires superhuman senses. I’m also not a big fan of the AI: enemies follow quite strict routines and will investigate noises, but I wonder at the efficacy of their training when they can’t spot a full-sized kayak in a bed of reeds from ten feet away. When they do spot you, they spend a long time shouting about it before opening fire, during which time you’re often able to escape and get back to a hiding spot. Still, I really can’t fault the atmosphere. Drawing and holstering your guns, gripping the oars and paddling your canoe, the soft sounds of the water and the cloying atmosphere of the missions areas combine to keep you fully immersed in the moment.

If you suffer from serious inertia when playing VR games, then Phantom probably isn’t for you. Movement is smooth and the rhythm of rowing quickly becomes comfortable (though tiring, after a while), but the motion of the water had me playing in 20 to 30 minute chunks and no more – but if you’re not bothered by the side effects, I’d say get stuck in, because this a weird curio that can only really work, and indeed does work, in VR.

Despite the fairly straightforward and overly serious tone, Phantom: Covert Ops is a cracking little stealth game with a unique core concept.