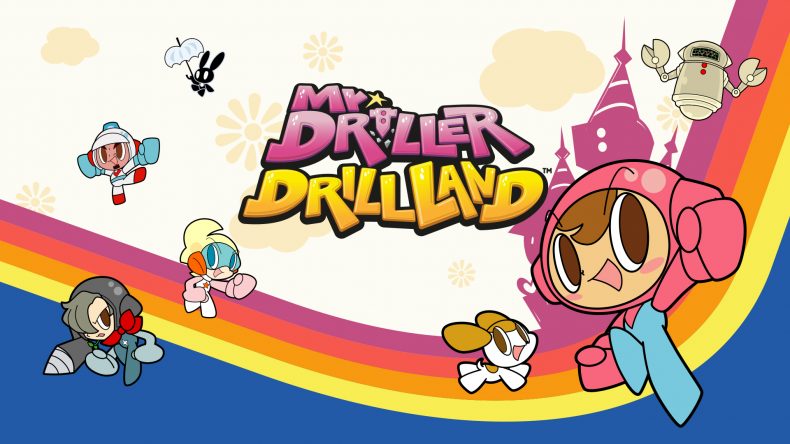 When Mr. Driller Drill Land was initially revealed for Nintendo Switch and PC as the newest “encore” release, I was a bit disappointed. I hadn’t heard of the original at the time and I was expecting another Katamari remaster after Katamari Damacy Reroll which I have enjoyed and played multiple times across both platforms since release. After looking into the gameplay and checking out the music, my interest was piqued. I adore Go Shiina’s music and the aesthetic in Mr. Driller Drill Land is super charming. The combination of both seemed like a perfect match for me. Having played Mr. Driller Drill Land, I can see why so many puzzle game fans were excited for this release. The amusement park attractions introduce more mechanics like enemies, different requirements, boss battles, and lots of story content through some hilarious and very well done voiced cutscenes. Mr. Driller Drill Land has a ton of content across the levels and game modes. The unlock procedure is also interesting and it plays into the amusement park theme well.

For this new release on PC and Nintendo Switch, a new casual mode option is available. You can choose this before jumping into any of the game modes. The classic mode is also available for those who want to experience Mr. Driller Drill Land as it was designed for GameCube
.

World Drill Tour offers the standard gameplay split up into different levels. Star Driller changes this up a bit with new items in surprise blocks. Drindy Adventure adds even more changes with traps while Horror Night House sees you trying to escape a cursed mansion. The Hole of Druaga is the mode that adds combat and feels like an adventure take on the puzzle gameplay. The game modes are varied enough to keep you busy for a good amount of time. Barring the core gameplay, you can buy power ups and items through the currency you earn during gameplay. Bringing a near 20 year old game to modern systems isn’t easy. Thankfully, Bandai Namco Entertainment has done some smart things to ensure Mr. Driller Drill Land feels right at home on high resolution widescreen displays during and out of the actual gameplay. The cutscenes and interface look very good. The actual gameplay has borders around the main gameplay portion of the screen but the developers have smartly added artwork around to almost make it seem like this is how the game was always supposed to be.

One area I was very impressed with this release is the performance. The game loads very quickly and I had no performance issues when played docked or handheld on my Nintendo Switch. Support for touchscreen controls for the interface is a very welcome addition.

Go Shiina’s music in Mr. Driller Drill Land is fantastic. There is a combination of very upbeat music and music that would feel right at home in a massive RPG with grand orchestration. The music with vocals is also excellent. The sound design barring the music is also really good. The voice acting is very well done. The combination of the updated visuals and music make it hard to tell that this is based on a game from nearly 2 decades ago. The biggest flaw in Mr. Driller Drill Land is the lack of full subtitles for the game. While this doesn’t affect the actual gameplay, I hate it when games with only Japanese voice acting don’t have full subtitles for every spoken dialogue. The other area that might not resonate with some players is the core gameplay. Arcade style puzzlers always rely on players enjoying the core gameplay enough to want to spend more time with variants on said gameplay. If you don’t enjoy the core gameplay in Mr. Driller, this release will not do much for you. Thankfully, there’s a demo to sample this. If you enjoy what you’ve played in the demo, the game is a must play.

Mr. Driller Drill Land is a charming and fun puzzle game that is easy to play but hard to master. I’m glad it was finally brought outside Japan since I had never played a game in the series until now. The addition of a new accessible difficulty setting, the ability to play with a single Joy-Con each in co-op on Switch, and the great visuals make this easy to recommend for anyone who wants a new puzzle game to chew into on Nintendo Switch. Hopefully this does well enough to make Bandai Namco Entertainment consider bringing more of its hidden gems to modern systems.

Lacking subtitles for some spoken dialogue

Mr. Driller Drill Land is an easy to learn but hard to master arcade puzzler that has brilliant music, responsive controls, and a ton of personality.