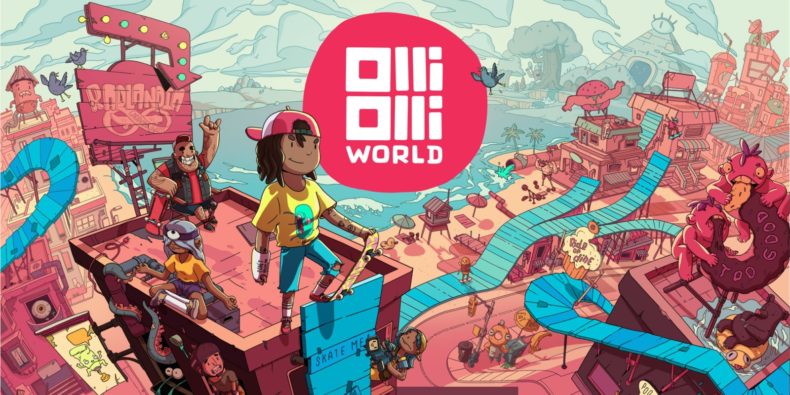 A huge part of my life in the early 2000’s revolved around the Tony Hawk’s Pro Skater series. With spectacular gameplay and a punk attitude, angsty teen Lyle spent hours exploring warehouses and schools looking for the best spots for the sickest tricks. Those glory days didn’t last though; after a few disappointing Hawk entries and a dodgy board controller that’s better off forgotten, a whole genre went into hibernation. Skateboarding games didn’t disappear for too long though, with indies picking up the slack. OlliOlli was one such game, with simple but compelling gameplay perfect for score chasers. Seven years on, the third entry in the series is ready to bring back the Gnar with OlliOlli World.

As an aspiring young skater, you find yourself in the boarding paradise of Radlandia. This colourful world is made up entirely of rails, ramps and fellow extreme sport enthusiasts, and is the ideal place to shred some sick lines. You soon learn that Radlandia is home to five skateboarding gods (not just great skaters, literal gods) and locating them is the only way to find the way to Gnarvana. Along the way you’ll make friends with all manner of zany characters, from skateboarding influencers to an embarrassing old guy who only refers to himself as Dad.

None of the story really matters when it’s time to grab your board though, and it’s all skippable if you just want to shred. The 2D skating gameplay of OlliOlli World starts off really simple, with you jumping from ramp to rail, hitting a few kickflips and making your way to the goal. Any direction you move the left stick sees your skater soaring through the air with a different flip trick, and any direction you move it when touching a rail starts a different grind. By dodging the different hazards littering each level, you’ll make your way to the goal and be able to continue your skating pilgrimage. 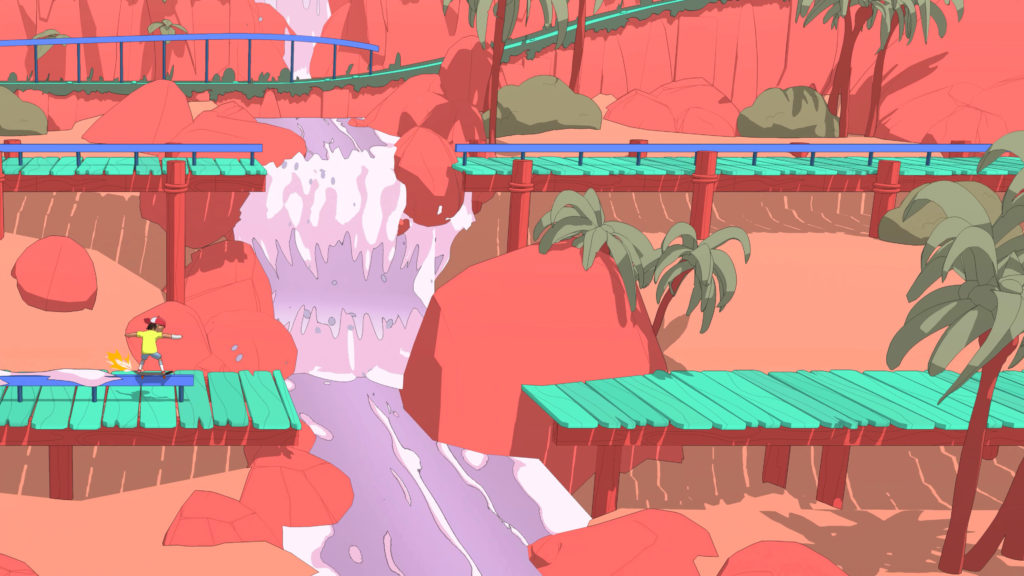 Each new world introduces a ton of new obstacles to deal with, and potentially chain together. OlliOlli World just constantly changes things up, with wall-riding, crystals that can be smashed by grab tricks, and half pipes that move you from background to foreground. You’ll need to be prepared to deal with every one of these obstacles at a split second’s notice, or you’ll be sent right back to the last checkpoint.

It wouldn’t be a skateboarding game if you weren’t shooting for high scores, and initially that’s when OlliOlli World really comes into its own. By finding the best route through a level and chaining together the most tubular tricks, you’ll get a ton of points and (hopefully) beat all the local skaters scores. Beating the top score on a level unlocks a new cosmetic, and beating a load of them in a single world unlocks a secret stage, so it’s well worth doing.

As well as scores to beat, each stage has 3 optional objectives to accomplish if you really want to master it. Most of these require you to know the exact layout of a stage to accomplish, whether it’s avoiding crabs on the beach or doing a specific trick over a particular gap. Although the variety of these tasks is impressive, I generally didn’t have the patience to play every level dozens and dozens of times to unlock a new pair of shorts. 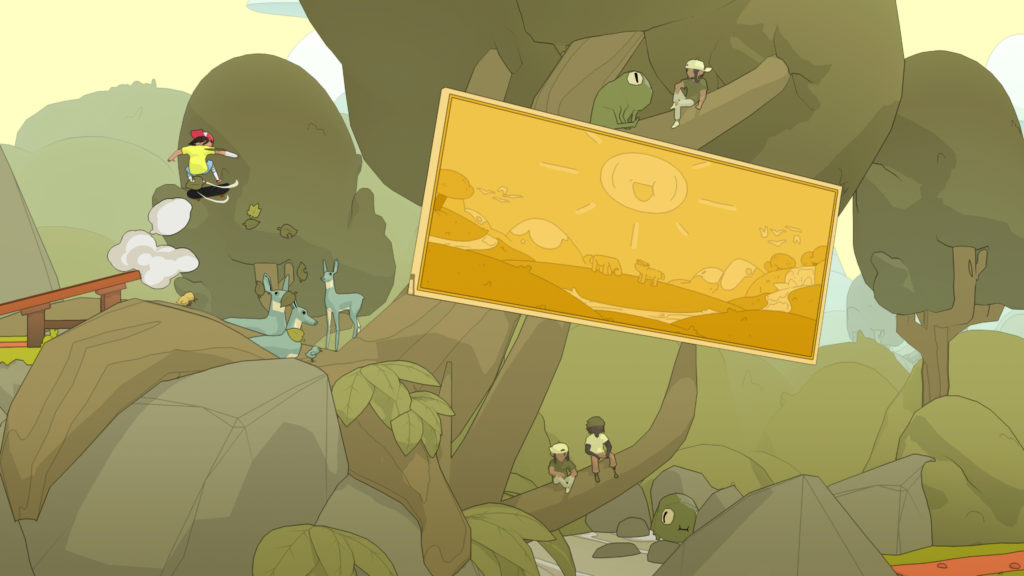 The selection of cosmetics in OlliOlli World is truly spectacular, with a gorgeous array of colourful shirts and garish accessories to unlock. Before long my glorious avatar was sporting shocking pink raver shades, flip flops and a Hawaiian shirt I’d be proud to wear all year round. Whether you want to look like a serious badass on wheels or don a bee onesie and a board shaped like a fish, OlliOlli has you covered.

Whatever vibrant outfit you choose, you’ll fit right into the colourful and trippy world of Radlandia. The aesthetic of OlliOlli World feels like it was made for me, with pastel pink beaches, lush forests full of humongous bees, and bleak factories spewing neon pollution. When I think of skateboarding games, I usually imagine realistic urban environments over a rainbow wonderland. OlliOlli absolutely makes it work though.

There is so much about OlliOlli World that makes me wish I loved it, but as I progressed into the later worlds I realised I wasn’t having fun. The game doesn’t stop adding new skills to your repertoire, and after a while the complexity just gets too much. If you don’t pull off a spectacular grab trick and rotate between each gap, and manual anytime the ground appears, you’ll be tens of thousands of points behind even the lowest score goals. I ended up so far behind the target scores that I ended up giving up on points entirely and just aiming for the end of the level. 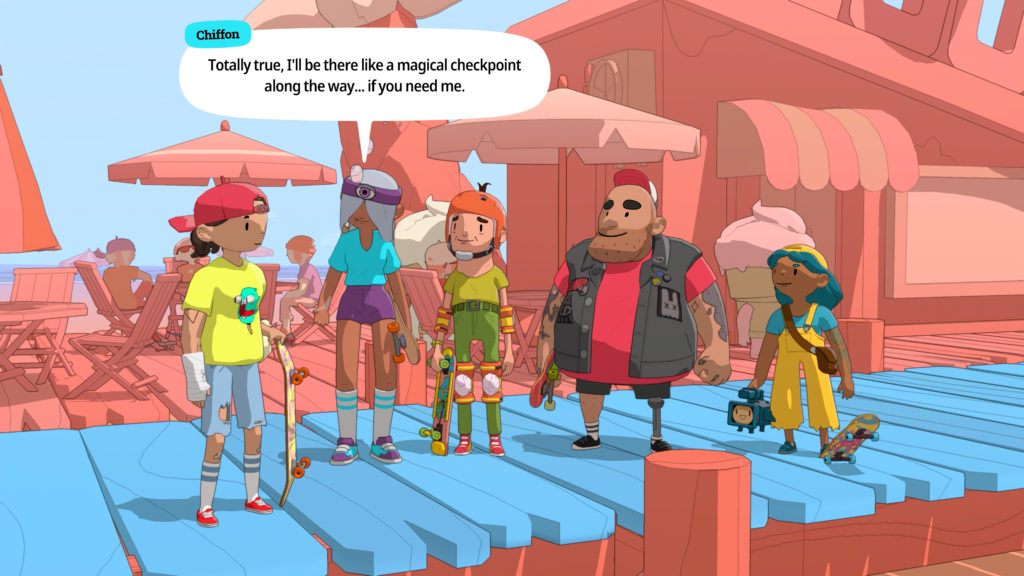 Even after ignoring my scores, it was a struggle to reach the goal towards the end of the game. As you make your way closer to Gnarvana, checkpoints become sparse and obstacles become almost unavoidable. The biggest frustrations come from some of the massive gaps you need to clear. There were multiple gaps that took me hundreds of attempts to clear, and even after making it over these ridiculous gorges I had no idea what I’d done differently.

Once you finally meet all the gods and roll the credits, there’s still plenty of content left to consume. As well as all the challenges to complete (including some post game extras) there’s a random stage generator for almost unlimited skating content. After selecting a few options you’ll be greeted by a stage and code to share with friends for score challenges. It’s a cool idea, but honestly the levels are just a bit soulless compared to the campaign. These stages are also the setting for the league mode that pits you against randoms online, which unfortunately makes this a little dull too.

OlliOlli World is a beautiful skateboarding game, which is a ton of fun in the early worlds. Unfortunately as the complexity and difficulty amps up, the enjoyment quickly turns to frustration. As much as I wanted to adore this colourful game, the checkpoint issues and overly complex abilities made the experience less than gnarly.

OlliOlli World is a beautiful game, but the gameplay gets very frustrating after the first few worlds.

The OlliOlli Series ramps up with stunning boxed collector’s Editions