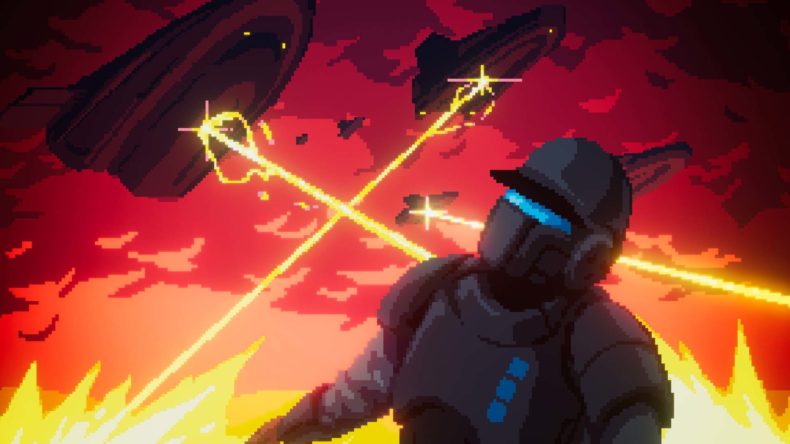 Upon booting up Orbital Bullet and sampling it’s 360-degree-wrapped platform gunplay for the first time, I was reminded of the wonderful tower-climbing classic Nebulus from back in the day. Only this time, instead of hauling a cute little green alien up and down flights of stairs, you take control of a tricked-out space marine in a rogue-like assault on all manner of Metroid-esque villains.

Rather than underpin the space violence with any overcomplicated plots or cutscenes, Orbital Bullet just places you in the guise of a cyborg out to save humanity and then drops you into its punishing action. The game keeps you on a circular playing field with the ability to travel up and down vertically but also to kind of slip in and out of the layers of each area. Enemies pile on the pressure, and can be taken down either with the arsenal of weaponry on offer, or simply by going old school and jumping on their head. 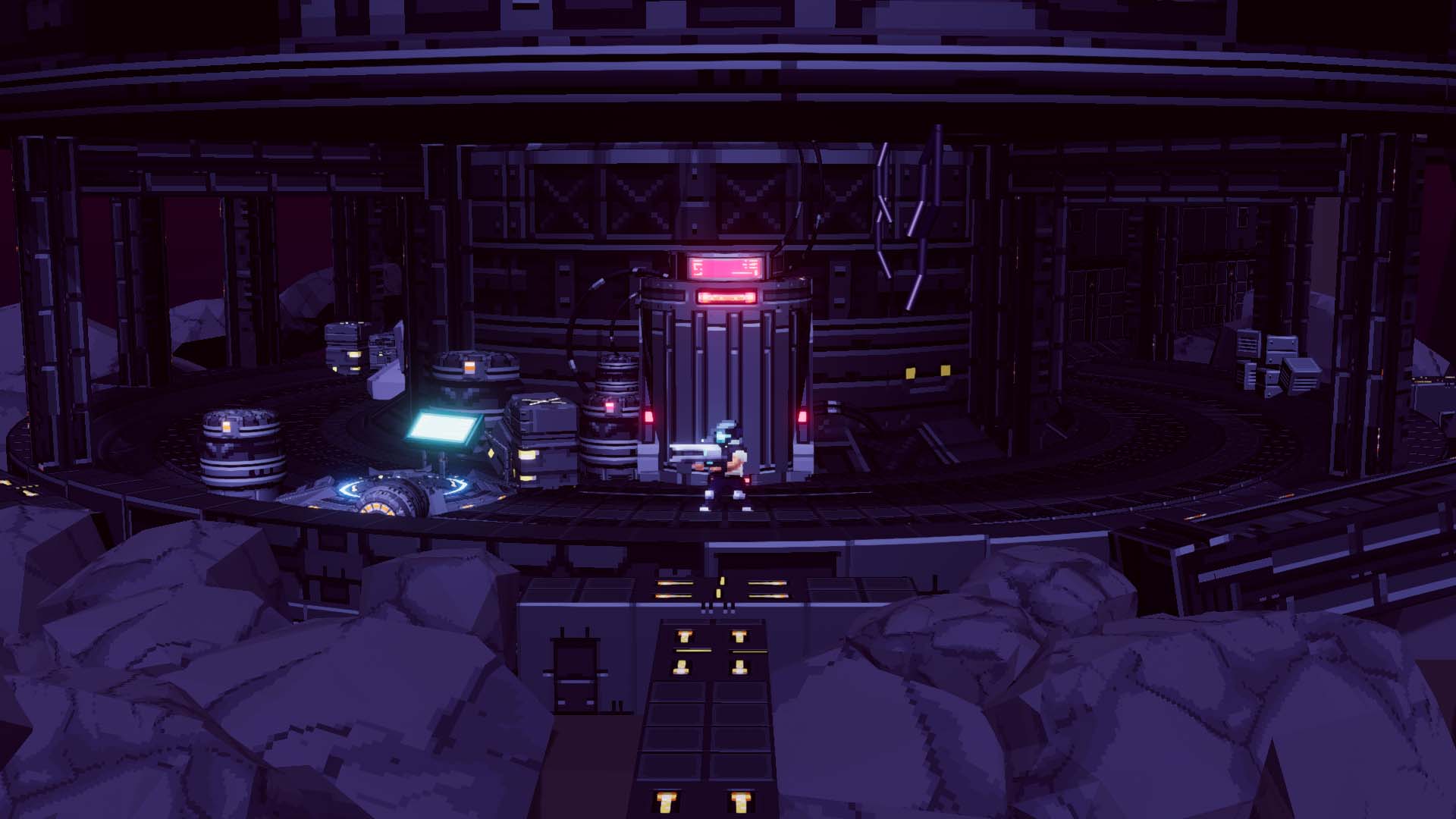 In motion it looks absolutely fantastic – the backgrounds and architecture of the platforms are uniformly great and very varied, but the enemies are also well designed and everything is underpinned by a glorious neon retro aesthetic which makes everything pop in explosions of colour. You must be prepared for the fact that you are going to die, lots, initially anyway. But there are a ton of goodies to find in chests along the way, weapons, armour, and crafting/cyber-modding opportunities. There is also an in-game shop where you can take advantage of some cool, very customisable skill trees to unlock.

Orbital Bullet comes into its own after your death – as you can then enter a room which allows you to change the class of your avatar (thus offering new gunplay, skills and armour choices). You can also use items called Nanobytes to permanently upgrade your warrior and take those advantages into your next procedurally generated run. 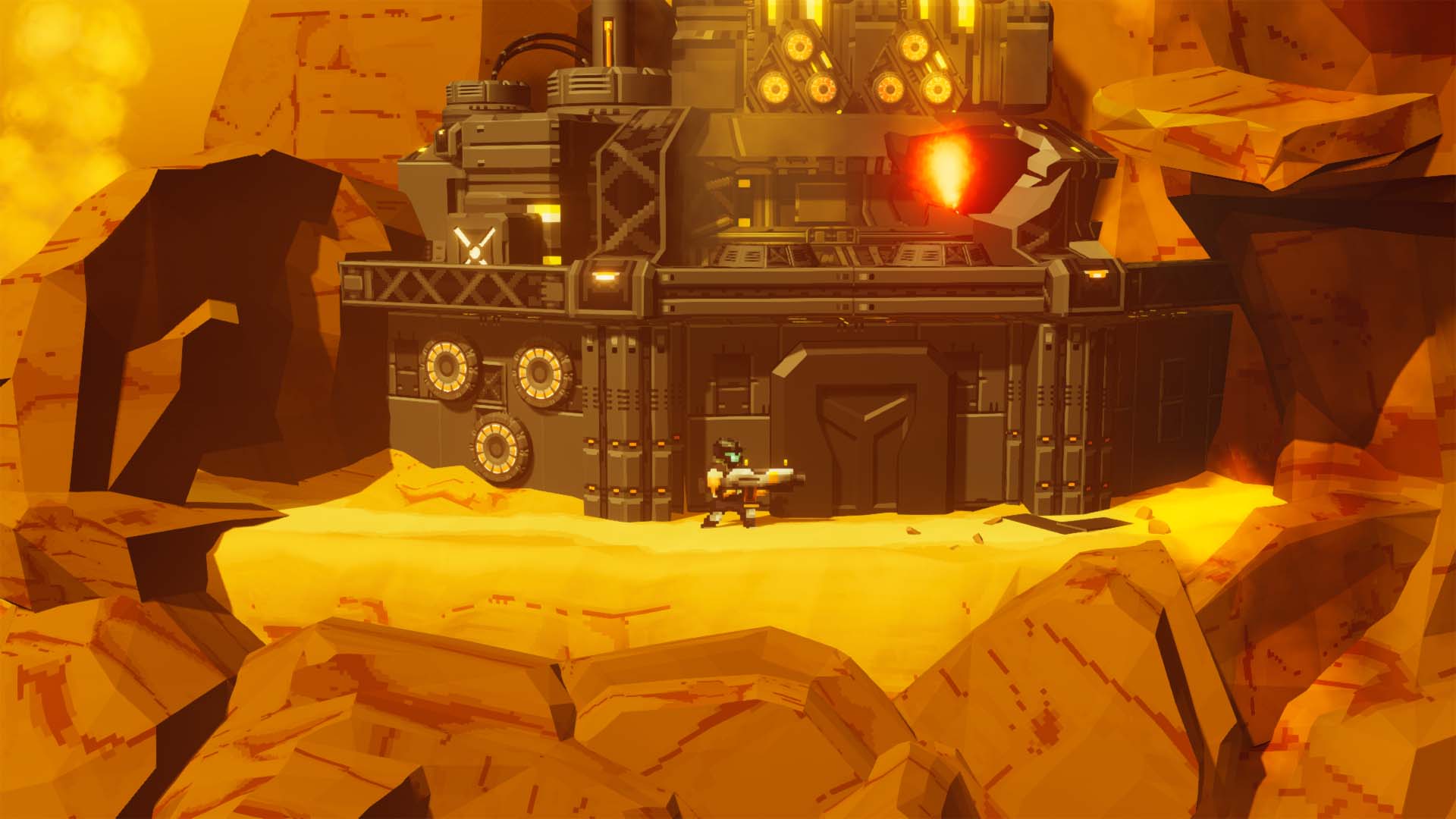 It can be a real sight to behold when you max out some of the weapons on offer as you watch them literally snaking their way around the entire stage. You can carry two and once and switch on the fly, which is super cool. The mix of 2D retro sprites and 3D models, and the fact that for the most part you can see pretty much everything going on around you, all the time, makes this a treat for the eyes. There are some impressive boss encounters, and a sense of variation between the different planets you find yourself on. If I was going to be picky, sometimes when in handheld mode, it all looks a bit too small – especially the text – and I found myself squinting. There is an option to rebind the controls, which means plenty of options available to use different control methods in docked mode.

Orbital Bullet isn’t going to be a game that you will still be playing six months down the line – despite the roguelike nature it is still a touch repetitive and it is reasonably easy to beat, especially once you are loaded up on Nanobytes and packing some serious heat. What you do get though is instant blasting fun, with a cool rotating mechanic, excellent visuals and a thumping soundtrack. There are some in-game achievements to unlock, and a good tutorial for those who need a bit of hand-holding before entering the fray.

Nice visuals
Lots to do

Quite short
Bit hard to see in handheld mode

Orbital Bullet is reasonably easy to beat, but is also instant blasting fun, with a cool rotating mechanic, excellent visuals and a thumping soundtrack.