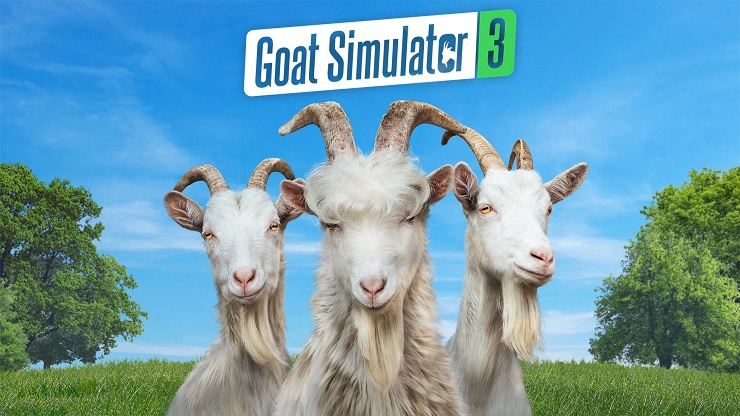 In the world of video games, Goat Simulator 3 is an anomaly. It shouldn’t work, and it certainly shouldn’t be as replayable as it is. Everything screams at you to put the controller down and find something else with some semblance of structure, but despite there being no clear story or structure, there’s something that keeps the controller firmly in your hands. Skipping an entire game all together, Goat Simulator misses the sequel and throws you straight into the third entry, and boy, it’s one hell of a wild ride.

One of the reasons I love playing Goat Simulator 3 is the various nods to gaming franchises and movies strewn across the open world. You’ll synchronise at Goat Towers like in Assassin’s Creed, grind telephone wires and railings like in Tony Hawk’s Pro Skater, and more. The opening section is ripped straight from the opening to Skyrim, and there’s even a moment where you launch a nuclear bomb offering up clear nods to the Fallout series, where you even get your own Vault-Tec inspired jumpsuit. Coffee Stain pays homage to countless games and movies, and it does so so unapologetically. 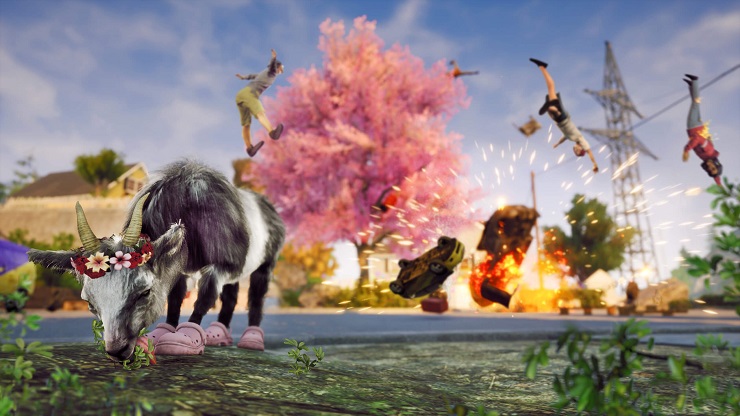 There’s not a lot of direction in Goat Simulator 3. Instead, you’ll go from area to area completing various quests that are so stupid that I loved them. Removing rubbish bags from a tennis court; taking part in an election; finding Bigfoot; cosplaying at a comic convention; and stealing a diamond in a Mission Impossible-type quest are just a handful of them. Perhaps my favourite was a level that replicated P.T., the horror demo by Guillermo Del Toro and Hideo Kojima, except with goats and a grandma firing projectiles at you in a wheelchair. It’s so stupid, but it knows it is, and I couldn’t help but keep playing.

By completing quests, you’ll get a high score and improve both your Illuminati Rank (obviously), and get given new tools to use when travelling across the world, such as rocket-powered roller-skates and an Adamantium Shield akin to Captain America’s where you can launch it at anyone or anything. There’re also collectables scattered across the map, often requiring inventive ways to find, such as grinding up to a water tower or sliding down a water slide. 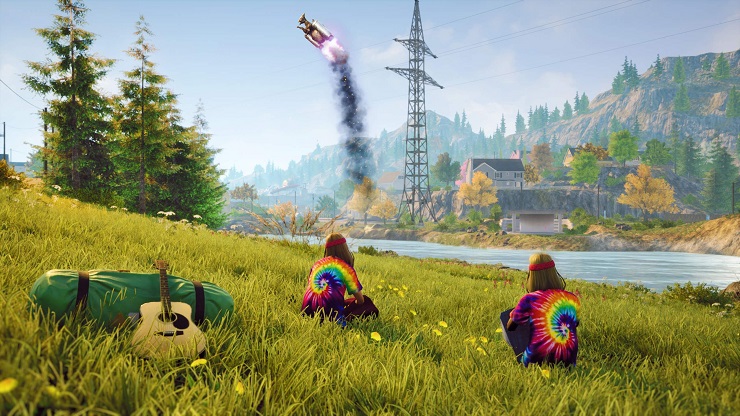 There’s no death in Goat Simulator 3, and having that immortality makes you feel free to try whatever you want without fear of failure. You can headbutt anything, use your tongue to drag NPCs halfway across the map, grind, backflip and front flip, and generally do what goats do, and then some. Want to drive a car halfway across the map? Go for it. Movement is never restricted, and there’s a lot of joy in finding new and inventive ways to reach new areas. A lot of buildings can also be ventured into, giving you the feeling of freedom to explore whatever you want, such as the random Ikea-like shop that can be found after a while.

Goat Simulator 3 is bonkers, but I enjoyed every second of it. It’s ripe with dumb NPCs that crash cars into the sea for no reason and say random shit that makes no sense, but it’s yet another thing that made me love it. It doesn’t follow the typical tropes we’re all familiar with, and because of that, it’s liberating, and exists simply to have fun with. My kids are obsessed with the original and its subsequent DLCs, and within an hour or so of jumping into this one, we were already laughing our heads off.

One particular moment that I’ll cherish for its stupidity was when we turned into a pig, put a bonnet on it, and tried to jump 10 times on a trampoline to complete one of the Instincts (a sort of daily challenge). We kept falling off the trampoline, and watching this lifeless pig fly through the air with its huge tongue flailing about in the wind will give me nightmares, but in that moment we laughed so hard, and felt so much better for it afterwards. 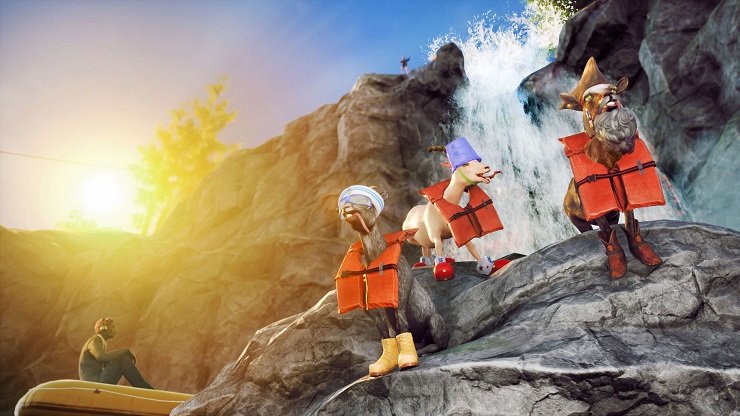 What makes Goat Simulator 3 even better is the opportunity to unite in the madness via online co-op or split screen. You can take part in missions together, or just batter the hell out of each other or the environment, making these moments of chaos even more memorable. I don’t think I’ve played anything so ridiculous before, and despite there being various bugs where I got trapped in a voting booth, or an item got stuck to me which I couldn’t get rid of, it’s actually forgivable. The world needs games like Goat Simulator 3, and it has come about at the perfect time.

While Goat Simulator 3 isn’t going to win any awards, it provided me with hours of fun. I’ll never forget some of the crazy shit I did while travelling across a world filled with pop culture references and inventive missions, and I’ll never grow tired of headbutting hippies, police officers, and office workers, or throwing them off the tops of buildings. If you’re looking for a game that is guaranteed to make you laugh and offer hours of unrelenting enjoyment, I can’t recommend this enough.

Goat Simulator 3 is ridiculous, but it's so much fun that it's hard to not recommend, thanks to crazy missions and enjoyable gameplay.