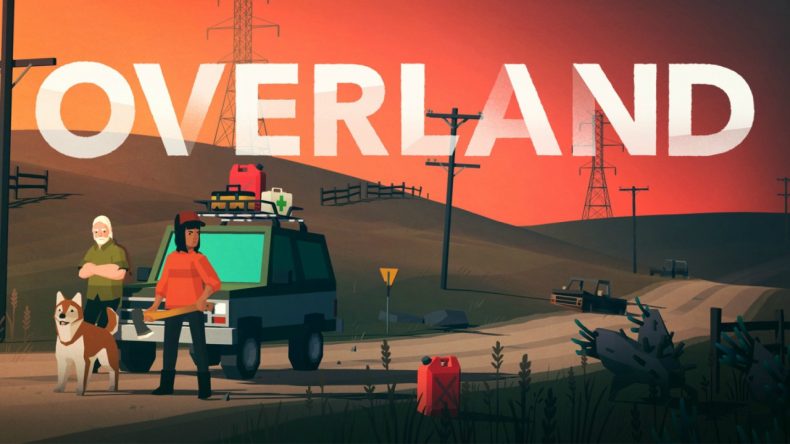 I can only imagine the elevator pitch for Overland.

“Yeah, so basically it’s pretty much The Flame in the Flood meets XCOM and, well… What? Yeah, no, of course. I understand. I’ll see myself out.” In all honesty, I’m being both overly generous and grossly unfair at the same time with that description, but I call it like I see it and those two games were all I could think about while playing through Finji’s apocalyptic survival game. Fresh out of early access where PC players have been able to watch its steady evolution, Overland presents a pretty but grim survival adventure.

Each time you begin you’ll be assigned a character at random from a seemingly endless generator, like in ZombiU. This is your protagonist, armed only with a backpack and a random item. Sometimes you’ll have a first aid kit strapped to the back of your car, or you’ll have a stick in your hand. You’ll always have a backpack, allowing you to carry one item and store another. Different characters also have different innate skills, such as being able to make alliances with other survivors from across the screen or using less fuel between stops. Your goal always remains the same, though. Traverse a destroyed America through burnt-out streets and dusty backroads, scavenging for supplies, fuel and fellow survivors. An alien menace has invaded the Earth, a species of huge, subterranean parasite that are sensitive to sound and extremely hostile. Each stage is a small, contained level that acts in part like a physical puzzle. There are items to search, which makes a noise, things to pick up off the floor, generators and cars to siphon for fuel and, of course, the enemy.

The XCOM influence is obvious, though it’s more about the atmosphere than anything. You move around a grid-based map, with limited movement and action points. The enemies tend to only be able to move one or two squares at a time, so as you go from point to point you always have to be aware of their position. If you’re armed with a weapon of some kind, and initially you’ll be lucky to find a knife or metal pipe, you can kill them by smashing their heads off. Be aware though, when they die, they’ll cause two more to burst from the ground – more, if you’re very loud. Other events like exploding cars or generators will also attract them, and it only takes two turns for them to fully emerge. Sometimes the monsters will purposefully kill one another in order to generate more.

Watching the map fill up with monsters in Overland is actually terrifying, and you’ll just want to get out of the map fast. Unfortunately there are roadblocks to clear, oil spills to avoid, and ramming through monsters will damage and ultimately set fire to your car. Weapons only last for a set number of uses and your survivors can only weather a couple of hits before they’re dead. I lost count of the number of times I had to abandon some unlucky soul just to make it to the next map, only to find myself outnumbered, unarmed and out of fuel. When I compared Overland to The Flame in the Flood I didn’t do so lightly. It’s not just in the sombre, contemplative soundtrack that the similarities lie, either. The world is bleak and unforgiving, and every single mistake or decision will have permanent, often damming consequences. You’ll be fortunate to reach the later zones with the original survivors you started out with, and it’s actually oddly heart-breaking to watch them have their little moments of quiet bonding at the rest stops between maps only to then see one or more of them slaughtered minutes later. It’s surprising just how well such a simple game captures the bleakness of the Apocalypse.

Moments of levity are few and far between. The majority of the time you’re just trying to stay alive, fighting with whatever you’ve got to hand, panicking as the monsters close in on your survivors. Luckily you’ll retain some progress, and be able to restart the current leg of the journey upon death, rather than having to go all the way back to the beginning. It’s aesthetically quite striking, though very simplistic and mutely coloured, but the foggy greyness of the townscapes contrast well with the golds and greens of the countryside.

The menus are a little fiddly. Once or twice I died because I thought I’d selected “fill up car” when I actually selected to get in instead. This allowed the monsters to encroach on my position and I still had to get out to fill up the tank. I was reminded of that bit in 28 Weeks Later when Jeremy Renner’s sniper has no choice but to get out and push, only to be burned to death for his bravery. Sacrifices carry weight, and every one stings. You can do things to help you, like set branches and oils puddles alight to exploit the monsters’ phobia of light and fire, but these things are all finite, and sooner or later you’ll need to get the hell out of there. It’s not helped by the random placement of items and maps, either, whereby sometimes you’ll risk your life to raid a place for supplies only to come away with an empty bottle and an old book you can sell at a trade post later. If there’s one thing I simultaneously love and hate about Overland, it’s the inclusion of dogs as group members. Don’t get me wrong, I love dogs, and watching a loyal hound go down defending you is heart-breaking. What’s weird though, is watching a dog sling a backpack up onto its back or get in and out of a car without you opening the door for it. They’ll also use weapons gripped in their teeth instead of just using their teeth, which is weird and unintentionally comical.

Overland is a game about survival and teamwork and never leaving a person behind, but sadly that choice will rarely be yours. When the chips are down and your back is to the wall, you’ll do whatever you can to get just one person into the car and away to comparative safety. While it would be nice if your survivors weren’t quite so weak and useless, or there was a way to really improve them over time, Overland’s bleak and desperate atmosphere succeeds in creating a truly tense and memorable experience.

Every encounter is tense
Makes you think
Simple yet atmospheric