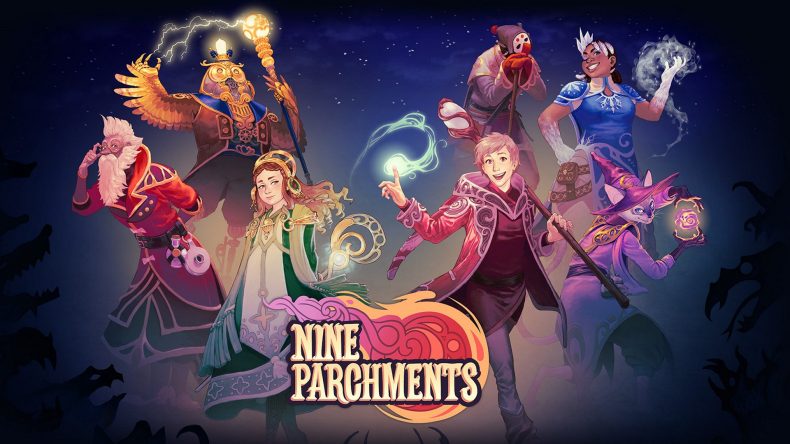 At no point is this ever less than completely clear that Nine Parchments comes from FrozenByte, the studio behind the relentlessly charming Trine series. Not only do the two properties share a universe, but the aesthetic, atmosphere, and sense of unashamed whimsey are immediately familiar in Nine Parchments. It’s incredibly pretty throughout, replete with bright flora, dazzling spell effects, and some wonderfully detailed backdrops that will make you long for FrozenByte to just bite the bullet and give us a full-on, character-driven RPG set in this universe.

The plot follows a group of wizarding students attempting to avoid flunking out of their class by gathering up the scattered pages of their master’s precious tome. It’s a pretty thin set-up to an even thinner plot, but as framing devices go its adequate. More story would have been nice, as the characters are never fleshed out or explored in any meaningful way, and so it’s hard to care much about what’s going on. Gameplay in Nine Parchments is a mix of frenetic twin-stick shooting and light RPG mechanics. Each of the selectable player characters (once unlocked) begin with three spells and progress to a total of nine. It’s designed to be played with others, and the spells reflect this. Beam attacks and damage-over-time effects can be stacked and combined to devastating results, though be warned: the game compensates for multiplayer by increasing enemy damage and defense. Be aware, though, that going at any enemy, even bosses, with four focused, combined attacks will often make short work of a fight.

Combat in general is one of Nine Parchments’ highlights. It’s frantic and fast-paced nature works wonderfully well with the charming aesthetic, and the short range blink move adds an element of precision and even strategy to some of the tougher encounters. When played alone, however, it can start to feel hollow in anything but short bursts. Health drops aren’t overly common, and the melee attack is so useless that if you overdo the casting you can find yourself desperately strafing and blinking for a few moments while you wait for your energy to refill. It’s here that the combat can suffer, because it can feel as though you don’t always have the right tools for the job.

There’s a loot system in place, but it’s neither particularly deep or gratifying. You can either find hats in various styles that do nothing but change your appearance, or staffs, which carry small stat boosts and are the ticket to unlocking new characters through combat challenges. Had Frozenbyte gone all out here, the replayability would have been way higher. It seems a game built for loot drops and clever character builds, but what’s actually here is very spartan in the grand scheme of things. Despite that, there’s still a lot to like, and you may want to play it through more than once for the sake of unlocking more spells and hats. If nothing else, the soothing, often comical narration and vibrant environments don’t get tired. Even the way the characters move is naturally likeable. Again, Nine Parchments evokes memories of Trine at every turn, and that’s no bad thing. Gamers of a certain age (ie: old) will remember classics like Simon the Sorcerer and Monkey Island, which, while not action games like Nine Parchments, nevertheless laid the groundwork for FrozenByte’s distinct style. It’s a charm that can create and keep fans, if there’s enough there to get their teeth into from the get-go – which Nine Parchments almost, almost has.

If anything, it just needs more of everything. Ultimately the characters only really differ in their spells, which means you could have given all the spells to the two starting characters and it wouldn’t have made a difference. On one hand, it’s good to see FrozenByte avoiding the trope of character classes, but on the other, Nine Parchments would have benefitted greatly from real variety in its characters. Given the diversity of Trine’s heroic trio, it’s a little disappointing.

On balance, this at least feels different from any other recent release, and those looking for something colourful to jump in and out of with friends could do much worse.

What Nine Parchments lacks in depth it makes up for in shameless whimsey and colourful charm.