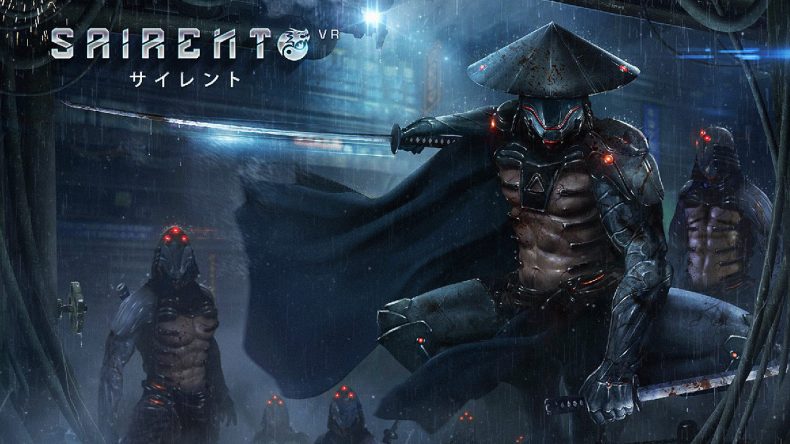 It’s no secret that the PSVR games catalogue is a little hit and miss. But then not every game can be a Beat Saber or a SUPERHOT, can it?

But one that did catch my eye is Sairento, previously released on the Oculus Rift. Solid reviews. Ported to the PSVR and making use of twin move controllers, this Sci-fi slice-em-up makes impressive use of the still fairly limited technology.

You play a stealthy Ninja assassin in a futuristic cityscape tasked with finding and eliminating a terrorist cell after an explosion claims a load of innocent lives. The campaign sees you moving through the various districts and the environs, dispatching enemy ninjas with the Liberal application of blades and bullets. Be warned going in: Sairento is incredibly fiddly until the control scheme clicks. Pushing the centre button on the left stick will cause you to walk in the direction you’re facing, though you’ll strafe rather than turn. In order to turn you’ll push triangle or square on the right stick to spin 45 degrees, or the square button on the left stick to flip 180 degrees. The centre button on the right stick allows you to aim a jump, which you can chain into double jumps. You can also wall-run and vault up vertical surfaces.

The verticality is impressive, essentially allowing you to sneak around above your enemy, using rooftops, balconies, awnings and signs to get the drop on the enemy. Stealth plays a big role as many enemies move in set patrol routes until they spot you, affording you the opportunity to remove them silently. On occasion, though, you’ll trigger an event where they just run at you, and you’ll need to use everything you have to stay alive.

Your pistols are holstered at your side, your swords sheathed on your back, and you’ll have to reach over your shoulder and down to your hip with the corresponding hand and a pressed button to draw them, which always feels cool as hell. When the combat is flowing right and you’ve mastered the movement controls, which for me took a long time, Sairento is one of the best action games you’ll play in VR. You have so much control over your avatar and the action is so fast satisfying that it’s hard not to get fully immersed. Switching from guns to swords is essentially for some enemies who will block your fire, which is where I struggled, as you’ll often need to out distance between you and the nearest enemy to give you time to make the switch. I’ll admit, I did miss the immediacy of just pressing Y to switch weapons. Gear is unlocked between levels, giving you access to machine pistols and powerful revolvers, hatches, daggers and cruel-looking scythe-like weapons. You can also improve your armour and skills. Skills are the most important, improving things like melee range, jump distance, weapon accuracy and survivability. You’ll be able to slide to avoid danger or execute assassinations from above, slow time, and navigate security systems by taking out power supplies.

Between the main missions there are challenge modes and time trials, as well as a multiplayer mode that, if nothing else, highlights just how ridiculously dextrous some people are. I preferred the campaign, to be honest, as it allowed me to play at my pace and plan encounters from time to time.

You can play Sairento standing or sitting, and either is fine as long as you have plenty of arm space. You’ll be slashing left and right, blocking, aiming and dodging, and you will move around an awful lot without realising it. Be safe and give yourself room to move freely. My only gripe with Sairento is one that many VR games struggle with: appearances. It’s not the prettiest or most detailed game, opting for an almost retro blockiness that reminds me of the early PS3 era. Character animation is fluid and your inputs are responsive, but the overall look is not particularly stunning. It goes for a Neo Tokyo style look in many of the environments, and mostly nails it, but it’s low detail and, despite the occasional sense of grand scale, it’s not much to look at.

Appearances aside, Sairento is the best action game I’ve played yet on the PSVR. It’s fast and fluid, and there are enough little flourishes in the gameplay to make you feel like a real badass. I should also report that despite suffering motion sickness in games like Operation: Flashpoint and Borderlands 2, I played Sairento for over an hour at a time on many occasions and didn’t suffer anything but some breathlessness after a tough fight. If you’re looking for a solid action game to really show what the PSVR and Move are capable of, Sairento is arguably the best available right now.

If you're looking for a solid action game to really show what the PSVR and Move are capable of, Sairento is arguably the best available right now.