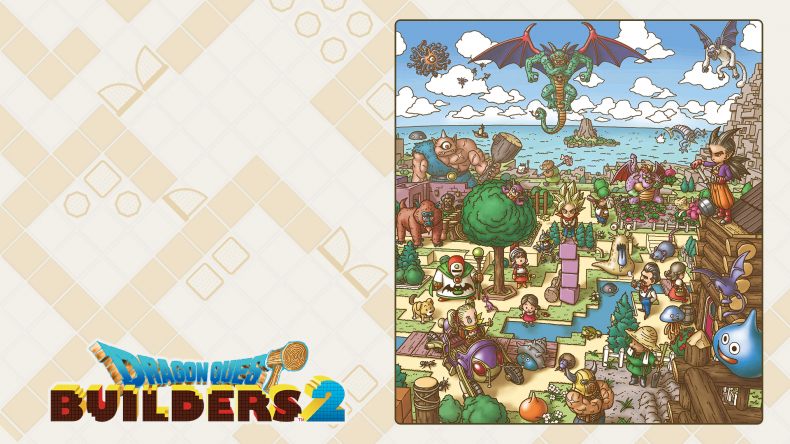 Dragon Quest Builders 2 has finally arrived on PS4 and Nintendo Switch in the West after a long wait. Unlike the first game that was originally on PlayStation systems only, Switch gets the sequel right from the get go and it has been very interesting playing both versions of the game. Dragon Quest Builders was a great blend of Dragon Quest and Minecraft but the sequel is a much more polished experience overall that does so much that it is just about pointless even playing the original when Dragon Quest Builders 2 is now available on both systems. Read Nick’s full review of the PS4 version here.

I adored the original on PS4 and PS Vita before replaying it on Nintendo Switch. The Switch port of the original solved the issue I had of not being able to play at home on TV and then take the game on the go. Games like this that have an addictive gameplay loop and ones that can be played in bite sized sessions are perfect for the Switch. On paper, Dragon Quest Builders 2 is the exact game you’d want on Switch but the port is not so perfect for a few reasons. In terms of content, Dragon Quest Builders 2 is at parity with the PS4 version. Both games have the pre-order DLC and season pass content available now or for purchase to release. The Switch version is now up to date with the Day One patch having released as well.

When it comes to controls, both versions have no real button customisation options barring some settings for placing items and the forced control options on Switch are much better than the PS4 version. The Switch buttons for attacking and jumping are Y and B respectively which is what most action games use while PS4 relies on Circle for jumping and Triangle for attacking which is a head scratching decision. I am disappointed at the lack of any sort of touch controls though. I thought it was probably too late for the original Dragon Quest Builders to have any form of touch because it was a late port of an older game but Builders 2 has been built keeping Switch in mind.

When it comes to visuals, Koei Tecmo have done a great job here with image quality. Dragon Quest Builders 2 looks great both docked and handheld. The aspects where cutbacks have been made are in draw distance and in shadow quality. These two are pretty noticeable right from the get go. While shadows aren’t really a deal breaker, a shorter draw distance in a game with so much verticality can be an issue for some especially in later areas. Two of the biggest issues this port has compared to PS4 are the load times and performance. While I just praised how nice the game looks docked and handheld, I would’ve preferred lower image quality if it meant a more solid frame rate. Handheld mode can hide some frame rate fluctuations for some people but it isn’t solid even when you’re playing docked in the tutorial area. This is pretty disappointing. Hopefully a future patch can add a frame rate cap because there isn’t any point in having an unlocked frame rate when it mostly hovers around 30fps.

Overall, handheld mode is great for hiding some of the frame drops and the game itself looks very nice on the go. The big downside is battery life in portable play and unless you have a portable charger or expect to play for only an hour or so, you will need to put your Nintendo Switch on charge. The game itself is superlative but if you are mostly going to play docked, you may as well go PS4 for this game. In a perfect world, this release would have been tuned for a more stable frame rate and power consumption. Hopefully the frame rate can be addressed in future patches because Dragon Quest Builders 2 on Switch is the perfect game for the system but in a not so perfect port.

A fantastic game that is perfect for Switch but the port leaves a lot to be desired thanks to a few major issues.

You may also like
dragon quest builders 2Koei TecmoReviews