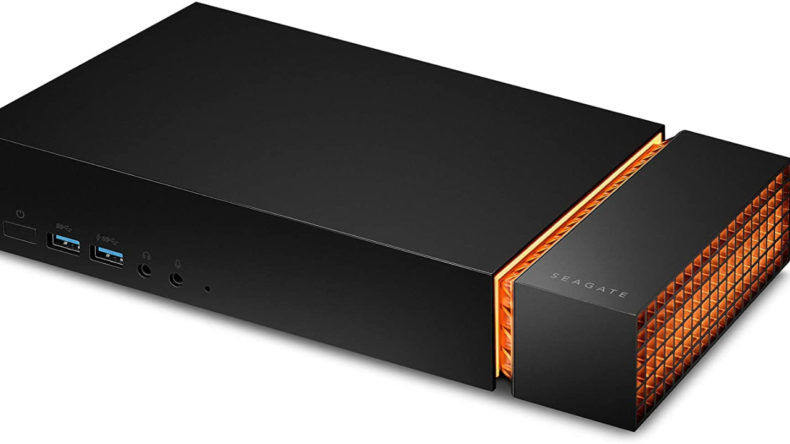 I recently took a look at the Anker 13-in-1 PowerExpand Docking Station and found it to be a handy little device to have if you like to game on a laptop, with some concession made for the price. Well, the focus of this review – the Firecuda 4TB Gaming Dock – does many of the same things, but with a few differences that more than make up for the higher price.

First things first though: if you’re planning to fork out £350 to add this to your set-up, you need to be sure of two things. Firstly, make sure you’re laptop or PC has a Thunderbolt 3 port; and secondly, make sure you have the space for it. The Firecuda Gaming Dock is a brick of a device that takes up a large amount of desk space, and comes with its own bulky power source.

By now if you’ve used a few Seagate products you’ll know what to expect in terms of aesthetics. The Firecuda Gaming Dock is functionally gorgeous, sleek and smooth, with an LED light display at one end where the front of the drive comes off to reveal the port for the M.2 NVMe SSD expansion. 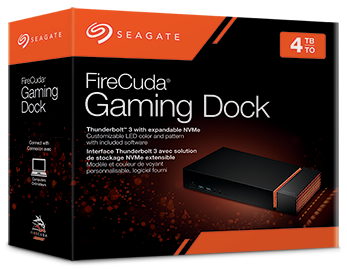 Credit where it’s due, this device runs like lightning (no pun intended). The transfer speeds are super fast when using Thunderbolt 3, while they remain fairly impressive when it’s connected by USB. There are five USB ports and two Thunderbolt 3 ports, a HDMI slot for running dual screen set ups and pass-throughs, and a 3.5mm port for a headset or microphone jack. It also has a RJ45 Ethernet port to assist with a wired connection online.

As I said though, this thing is a beast. It weighs a ton (well, just under 6lbs, actually) and is nearly 11 inches long and 5 wide. If you do have the space it’ll look right at home beside modern consoles or a PC or laptop, and will streamline your set-up considerably – provided you have a Thunderbolt 3 port. If you don’t, you may find that some devices won’t work properly. For example, I struggled to get the Oculus Rift to run when connected via this method.

You can customise the RGB using the software available online, so you can sync it with your other lights, while you can use the same software to set automated back-up macros and such, which is very convenient if you’re constantly on the move. What’s also convenient is the enormous extra storage it brings. Even being a gamer with a vast library myself, I can’t imagine what anyone would need an extra 4TB of storage for, but the Firecuda has it.

The Firecuda has its own ventilation built into the design, which is, as expected, super sturdy. I wouldn’t throw it down a flight of stairs or anything, but it will absolutely travel well in a bag or case. My only issue with this device is its size. It won’t sit neatly under many TVs or monitors, although it is sleek enough to not look out of place wherever you choose to put it. Oh, and it’s not cheap, either, coming in at a pretty hefty £349.99 from most retailers. Although for that price you’re getting the trademark Seagate quality in an incredibly sturdy piece of kit.