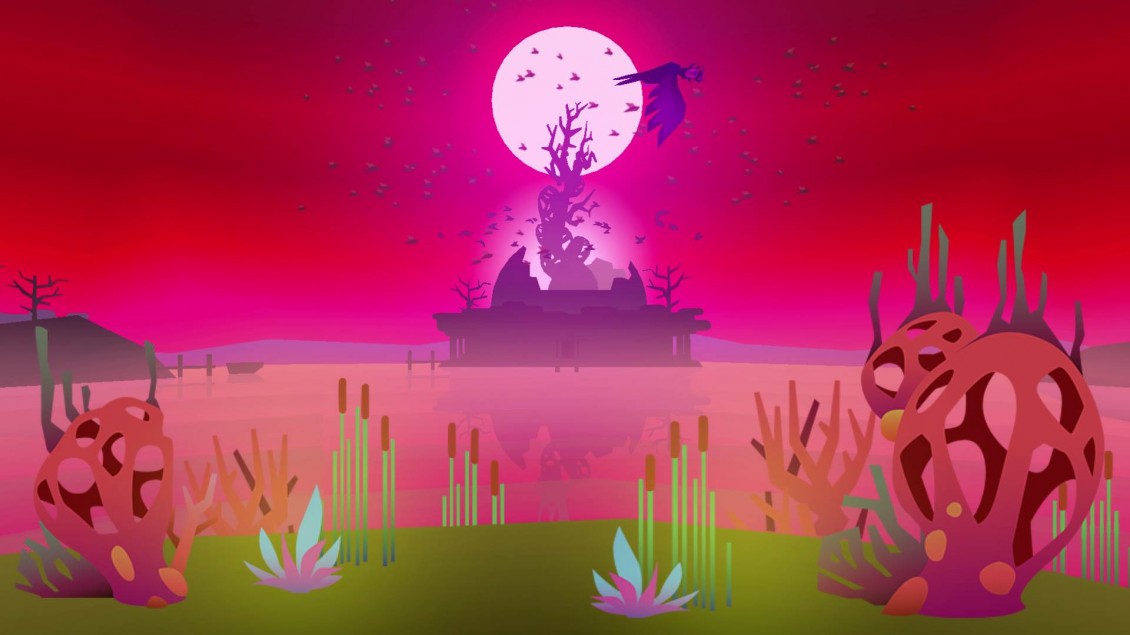 The Playstation Vita is a dead handheld just about still walking. Any of the must-play exclusives it did possess have nearly all now been ported over to other mediums, there are hardly any Vitas out there in the world as it is and if there are, then they’re probably gathering dust in a drawer. It’s a damn shame, but the Vita is on its last legs. Desperately crawling on the scoring sand, driven on by hope, only to end up being food for the vultures.

One studio didn’t appear to get the memo and their new game is, for now, a complete Vita exclusive. Drinkbox Studios, who you may well know for the wonderful lucha libre brawler that is Guacamelee, have always credited the Vita for their success and have continued to support the console by releasing a game that probably couldn’t exist anywhere else.

In Severed you play as a one armed warrior named Sasha who has to trawl through (what I believe to be, anyway) the underworld, or at the very least some very strange dimension, to find and save her family. It’s a dungeon crawler with a pretty unique gimmick, the combat is all touch screen based. The easiest way to describe it, to create an instant idea in your head, would be to say it’s like Fruit Ninja, but that undersells it massively. In its very simplest form, in its concept, it’s like Fruit Ninja, but it goes a lot deeper than that and it is a gimmick that never gets boring. Each encounter plays out in the same fashion: the enemies appear, as many as seven at once but usually three or four, and you have to slash at their weak and exposed points in order to kill them, but you then have to block their attacks by swiping in the opposite direction to them. However, with some enemies their attacks have to be prevented by swiping at their bodies and interrupt them as they’re charging up. Finally, if the focus meter is full, you will have a moment of time to sever off enemy limbs in order to be used for upgrades. It’s simple and satisfying, yet it progresses – while the basic outline of each encounter remains the same throughout, the colour between the lines gets more and more interesting as you progress.

The wonderfully designed creatures, which vary from intense, floating eyes to minging mouldy tree like things, from giant sharp toothed monsters made near entirely of claws to to a four faced bats with razor wings and triceratops inspired beasts that has its head split in half, all get upgraded with new armour and magical buffs as the game goes on, meaning you have to fairly often change your plan of attack. I found myself having to think through which monsters I should engage with first and which to leave until last, but then having to manage my time with each correctly to be ready to block attacks.

Sasha gains new abilities as she makes her way through the curious realm, too. The boss fights are a lot of fun and upon beating the first one she receives a mask which allows her to freeze an enemy for a certain amount of time, which either gives her space to deal with other foes, or an opportunity to get rid of that one pronto. After beating another boss Sasha receives a big set of jaws which doubles up as a breastplate, ideal to steal enemy buffs and use them for herself. Those two coupled with more powerful strikes and a “rage” mode, where you go even more powerful for a short time before it overwhelms you, and the enemy variation all kept me well enamored right until the end.

The world in which Severed is set certainly helps, too. The art style is the same vibrant, colourful cell shaded look from Gucamelee, but the tone of the world couldn’t be more different. Even with those pesky skeletons, Guacamelee was a sunny, cheery Mariachi filled land, but Severed is an eerie, abandoned world where something very bad has happened. It feels near deserted, but then a two headed talking bird with a jaw for a face will perch down and have a conversation, a shadowy figure will scurry out of the corner of your eye. There is a dark, untold history to this place, there’s an ambiguity to this mysterious world and, even though I found Sasha’s personal tale a little underwhelming (especially the ending), I wanted to learn more about the place in which it happened. Why is Sasha and her family there in the first place? Who is your creepy helper? What is this place? What happened here?

Severed is not completely without fault, though. The puzzles you have to complete in order to get through the dungeons are all remarkably easy and feel like they’re only deployed to drag the play-time out. This may also be the case with the lack of fast travel: the world isn’t exactly massive but when you’re nearing the end and are just wanting to find all the secrets and 100% every area, it becomes tedious having to make your away around a world which is a little tricky to navigate. Also, due to how you play Severed, the Vita can become awkward to hold after a while and I never really managed to settle on how I liked playing it best: either with it laying on the desk or in my hands. I’m really not sure how left handed people would play it either, and I feel they might struggle, something that could have been rectified if using the bumpers during encounters turned Sasha around.

Regardless, I did have a great deal of fun with Severed and I applaud Drinkbox for taking a gimmick that so easily could have miserably failed and making it into a game that didn’t outstay its welcome in the slightest. If Severed is the Vita’s swansong, then it’s a wonderful note to go out on.

Story falls flat.
Puzzles are far too simple.
Vita can get awkward to hold.

Severed takes a gimmick in touch-based combat and actually manages to successfully wrap an entertaining game around it. The eerie, ambiguous, yet beautiful, world helps but I found that enough new aspects were added to the combat to keep it interesting until the very end. If this is the Vita’s swansong then it’s going out on a wonderful note.