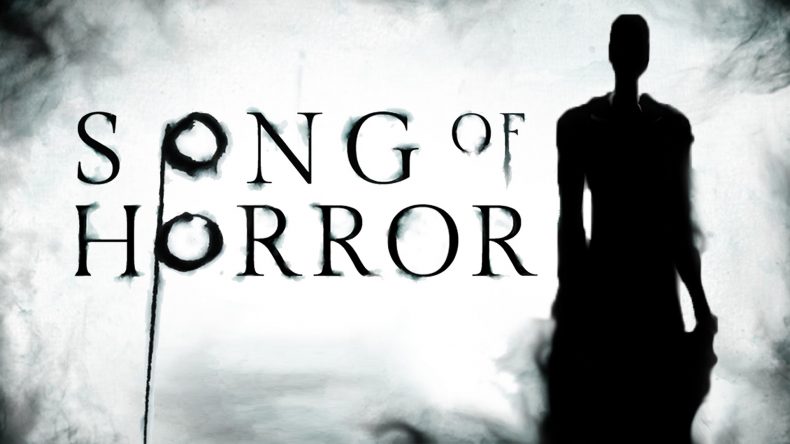 We’ve all watched a horror film and face-palmed at the idiotic choices made by the characters. We’ve watched them go into the dark basement of a murderer’s house, or investigate the creepy sounds coming from down the hall, usually leading to a premature death. This is essentially the beginning of Song of Horror.

Daniel is sent to retrieve the latest manuscript of author Sebastian Husher, who hasn’t been heard from in days, but finds the man’s house empty and the front door left ajar. In he goes anyway, as we take control of Daniel during this playable prologue. The house looks old and sounds older, creaking and groaning throughout its many rooms and walls, and there’s eerie music coming from somewhere further in.

And there’s a door that even Daniel says shouldn’t be there. It’s a total red flag to even find the door, but opening it reveals a sight that would send any sensible person noping outta there like a Looney Tunes character, complete with the person-shaped hole in the wall. But no, Daniel heads inside and, as you might imagine, it doesn’t go well.

A few days later, Daniel’s ex-wife Sophie turns up, wondering where he’s gone. However, she isn’t the only character available to you, there are others able to journey to the house, each with their own reasons to enter. These choices aren’t just for show either, because it’s entirely possible you’ll need at least one of the others, because death plays a large part in Song of Horror. Often, without warning, which can be particularly frustrating. Investigate the wrong thing and that’s the end of that character, permanently, and their belongings will be left behind for the next character to find. Lose all the characters in a chapter and you’ll have to start the chapter over. But while those frustrations do threaten to spoil the game, Song of Horror often redeems itself through some truly spectacular atmosphere and scares that reminded me of classic Japanese and Korean horror movies. None of the usual loud bangs and cheap jump scares of modern horror, instead there are quiet moments that make your heart stop. This is helped by the old Resident Evil camera angles, allowing the game to direct the player’s eye to exactly where it wants. Walking upstairs in the old Husher house, the camera looks down the stairs toward your character, and a mysterious figure suddenly appearing in the previously-closed doorway at the bottom. These little moments got me every single time, as the player character almost never sees these events, so it feels like those movie moments in Japanese classics like Ju-On: The Grudge.

The premise of Song of Horror feels like it takes its influence from these films too, perhaps coupled with other, western movies, as it all revolves around a music box that was gifted to Sebastian Husher. Turns out that it hides a dark secret, tormenting anyone that comes into contact with it, especially those hearing its haunting melody. This means a more paranormal threat, one that cannot be fought or killed, and this means running and hiding when the darkness creeps in. I really liked the way Song of Horror’s mechanics were woven into the game. The atmosphere was incredibly potent, because I wasn’t constantly chased or harassed by anything. Instead, the looming presence and threat of the creeping darkness, which might try to break through a door at any moment, kept me on edge throughout the entirety of the game’s first episode. Sometimes the darkness will try to push through a door, leaving you with no option but to mash the A button (I played using an Xbox controller) and pressing RT at the right time to try slamming the door shut, as shadowy hands grasp at the door’s edges. Other times, the darkness cannot be pushed back and you’ll have to hide in a cupboard or under furniture. When this happens, the camera gets right in the character’s face, enhancing the claustrophobia and fear, before you’re forced to hit LT and RT together to the rhythm of a heart beat, until the threat passes. Mashing buttons isn’t exactly scary, but there’s still a lot of tension in these moments, complimenting the oppressive atmosphere during the exploratory periods in the gameplay.

Exploring is pretty awkward however, thanks to some fairly unresponsive controls and clunky animation. There are no tank controls, though I’m a fan of them, but direct control over the movement never quite feels exact enough. This isn’t helped by the need to use the right stick to direct where the character looks, in order to see the various interactables in the environment. The combination of these controls result in some annoying (and immersion-breaking) moments, as you judder, twist and turn your way into position, just so you can pick up an item or open a door. It would be comical, if it weren’t so irritating. Speaking of doors, they play a big part in Song of Horror. Many doors will offer a prompt of listening before you enter, which is vital to your survival. The darkness and “The Door” are linked, and I won’t mention more for fear of spoilers, and if you don’t pay attention to what might lurk beyond, opening a door could mean an untimely death. Sound is also a big part of the game, creating such an oppressive atmosphere that you’ll end up creeping your way around to avoid waking whatever nightmares lurk in the dark.

Song of Horror is an intriguing game. Its second episode isn’t as impressive as the first and the third isn’t even out yet, so it’s difficult to fully recommend the game as it is. That said, the story is interesting and there is an old school style to its gameplay and puzzles that will keep fans of classic horror games happy.

Song of Horror has some great ideas and is genuinely scary at times, but random deaths and awkward controls sometimes threaten to spoil the experience.