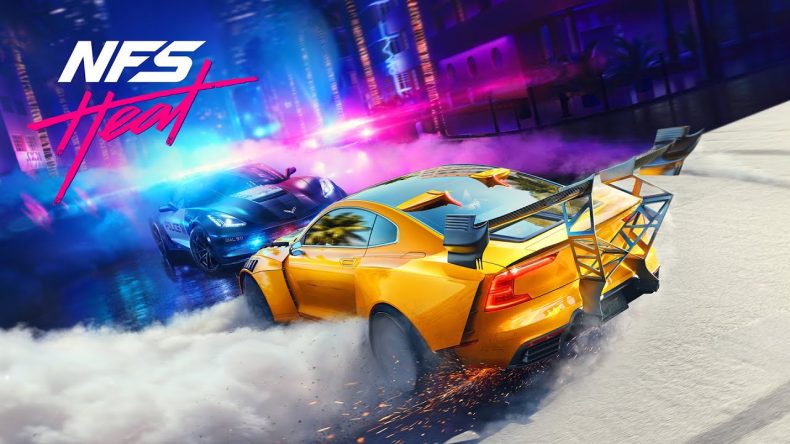 You probably won’t find a better arcade racer than the phenomenal Burnout Paradise. Many have tried and failed, but it remains the best of the bunch. When I’m presented with a game that cares more about racing at blistering speeds, big time crashes, and rough-necking with the cops, I’m in. Need for Speed Heat is a step in the right direction for a series that has struggled with its last few releases, and although it still has issues, there’s plenty of good times to be had in Palm City.

Let’s get the story out of the way, because honestly, despite early promise, it’s pretty naff. Luckily you can skip through the majority of the dialogue, and who plays Need for Speed for the compelling narrative, anyway? You’re a rookie street racer who comes to Palm City in search of making a name for themselves. You meet a bunch of characters that all have success in the street races, but the cops are out in force in bringing an end to the thousands of dollars worth of damage and illicit activity that comes with the sport. Lt. Frank Mercer heads up the operation to stop illegal street racing, and along with that, his task force are taking liberties with you and your newfound friends. It’s about as generic as it comes, with forgettable dialogue and cutscenes, but the gameplay between the story beats is well worth giving the story at least some of your attention. Palm City resembles Miami in a lot of ways. It’s a nice mix of cityscapes and mountainous terrain, filled with gorgeous scenery and big bright buildings that look even better at night. It’s not on the same kind of level as Forza Horizon 4, but it’s still pretty to look at. When the lights are burning bright with blue and pink neon hues, it provides the game with a semblance of life, but there’s not much else going on in the city to make it feel lived in or alive. Still, the racing takes away any need to pay attention to whether or not Brian is doing his grocery shopping or Helen and the kids are walking the dog in the park. You’re far too focused on the path ahead (and the checkpoints on the minimap) to pay attention to what’s around you, anyway.

What Need for Speed Heat does well, is the handling of your car, especially around corners. It can feel heavy at times, but drifting around corners and taking full control of your car is simple and effective. To drift round a corner, you have to take your finger off the trigger, then press down again to drift. It takes some practice to get the hang of it, but when a successful drift gives you the edge against other drivers, there’s nothing quite like it. Fine-tuning your vehicle to how you want it to feel can make all manner of driving mechanics a dream to play, just as long as you know what you want.

Throughout the career, your main goal is to earn Bank (or money, to you and I) and Rep. Money can be spent on upgrading your vehicle with parts that give you more control off-road or on sanctioned tracks. Buying a new exhaust or ECU will improve the performance of your car; better suspension will see your handling get better, and mixing it up with the clutch and transmission alters the power delivered to your wheels when driving. All car parts fit into a range of different categories (Stock, Pro, Super, and Elite) and by experimenting in the Garage, you can fine tune your car to cater to all types of races. Whether you want better grip on the tarmac, or sleeker drifting around corners, playing around with parts will alter the type of car you want. You’ll also be able to make sure they’re better on roads or off them, however, one car can’t do everything. There’s plenty of cars to buy in Need for Speed Heat, and the more you play the more you’ll unlock for purchase. That goes for better parts as well, and there are decorative variables to pimp your ride. There’s no Day and Night cycle, but you can choose when you want to go out racing. During the daytime, you’ll race in officially sanctioned races as part of Speedhunters Showdown. You don’t earn Rep during the day, but there’s money to be earned for upgrading your car, making them look sexy, and adding new cars to your collection. The more exhilarating time to race is at night, and by going out in the dark, you’ll have a lot more fun.

And this is the hook, really. Taking part in the illegal street races at night earns Rep which leads to better car parts (the cool people won’t sell cool parts until you show you’re cool), but there’s also a risk that comes with it. The Palm City Police Department are more alert in the evening, and if you get noticed by them, it means they’ll hunt you down until your ass gets busted. The more Heat you earn at night will multiply your Rep, but if you get caught the multiplier disappears. The more races you enter, or the more cops you attract can leave you with a great Rep score, but when you’re trying to evade four or five cop cars it can get pretty intense. It’s a little like the Dying Light day/night risk/reward idea, but with cars and cops.

I found the cop chasing exciting, even if it takes a while to break away from them. They’re out for blood, and these chases really test your skills as a driver. Causing a cop to crash gives you a neat bonus, and if you manage to escape you keep the multiplier. At certain times I was trying to get away from so many cops that when I dispersed of one, another would show up. My glorious Ford Mustang 65 took a hell of a beating, but driving through a garage automatically repairs any damage. What makes driving at night even more of a challenge is that you can only repair your car three times as opposed to an unlimited amount in the day. One of the biggest disappointments I’ve had with Need for Speed Heat was when I’d spent a good amount of time racing in two or three events, only for the game to crash, forcing me to restart my Xbox One. Another time I had directional prompts not appear in a Sprint Race, as well as the yellow path on my minimap cut off at around 75% of a race. It may have only been a few occasions of this occurring, but it’s enough to leave you asking “why is this happening in a big budget racer from EA?”

What makes it more like a Burnout or Forza game is the different mini-challenges spread across the city. There are billboards to crash through, street art to collect, competitive jumps to take on, and speed barriers to break. These all give you Bank to spend and are a nice break in racing for when you just want to drive around for a bit, exploring Palm City.

Need for Speed Heat isn’t quite at a point where the franchise should be, but it’s a step in the right direction. Racing is fun in both the day and night, and there’s plenty of cool stuff to spend your hard-earned cash on. Despite the few bugs I encountered, a dull story, and a relatively lifeless city, Heat is a decent racer that will keep you occupied.

Need for Speed Heat puts the franchise back on the right track, but the various bugs and dull story means the series is still behind the pack.