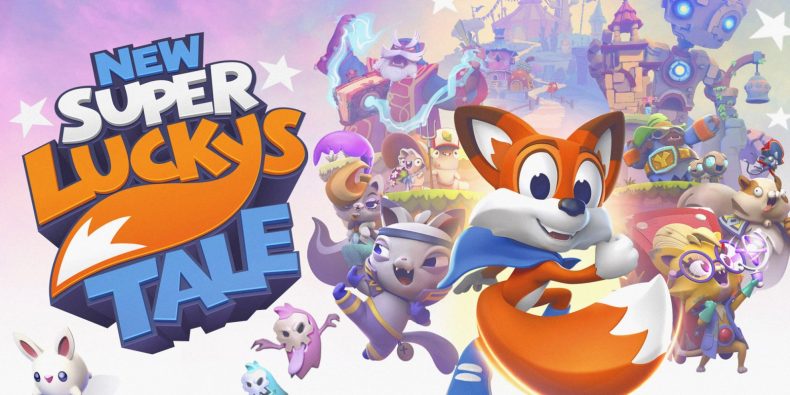 Generally speaking, the 3D platformer feels right at home on a Nintendo console. Since Super Mario 64, we’ve been exploring 3D worlds in search of enemies, collectables, and secrets. When done well, they can really shine, but done badly, they suffer against the competition, particularly from Nintendo itself. A trial by fire it seems is in store for New Super Lucky’s Tale, first released as a launch title for the Xbox One X. However this is not a simple port, but a remaster, hence the “New” addition to the title.

First off, the visual upgrades are quite striking. A lot of effort has been put into how it looks, particularly in the backdrops and surrounding areas. Additional lighting effects and bloom give a more vibrant aesthetic to the levels and hub areas. It takes what was already a joyful and wholesome experience, and dials it up an extra notch. Also, certain areas with sheer drops have had their dark abyss replaced with lava or other more detailed textures. Another notable change is the improvement to the cinematics that introduce key boss characters as you encounter them. These are fairly simple and short but add an extra layer of whimsy in keeping with the playful tone. Collectable pages now have additional animations when picking them up ,too, like when Mario collects a Star, Sprite or Moon.

The vastly improved camera is perhaps the most welcome change to this version. It’s now fully controllable and also sensibly positions itself to give you the best angle in close-quarter situations. In the original, the camera could fail to catch up or be at an angle that frustrated players.

Another gripe with the original was its length. Again, New Super Lucky’s Tale does its best to address this. There are additional brand-new levels to explore, including some DLC content from the original built-in. It doesn’t dramatically expand the game, but certainly adds another hour or two. These additions are also weaved into the story quite cleverly and make the experience feel more complete. Chances are you won’t notice which bits were new and which bits weren’t, unless you were overly-familiar with the first game. Large parts remain unchanged, though, some good, some not so. Firstly, the game still oozes charm and is just so incredibly likeable, thanks to the unique locations and the comedy of the interactions between characters. It all fits nicely with the overall cute art style it adopts. The levels are also very well designed for the most part, they flow really well, and there’re some nice little touches. These ideas aren’t revolutionary but there’s a level of competency here that deserves a mention. The chirpy music and sound effects of the enemies complement the tone of the game, and help reinforce that optimistic vibe that weaves its way throughout.

But the question of progression is one that rears its head once more. Lucky has his moves from the outset, and doesn’t learn any new skills throughout the entire adventure. With his combination of running, jumping, digging and tail-spinning there is enough choice, but it never elevates beyond this. The game is undeniably easy as well. Now this is clearly aimed at younger gamers, who will enjoy the characters, worlds and cute conversations, but for people who can remember Super Mario 64, it’ll provide very little challenge. The fact I reached the final boss with upwards of 50 lives should tell you everything. To be fair, without spoiling anything, an effort has been made to ramp up the final boss fight difficulty. And that’s fine, except given the rest of the game is still easy, it creates a jarring difficulty spike which some of those younger gamers may find off-putting.

Super Lucky’s Tale suffered when it launched because at around the same time we were treated to the sublime Super Mario Odyssey, and it couldn’t compete. And now by coming to Switch, it’s kind of faced with a similar problem, with better platformers available on the console. But, it’s still a likeable romp, with bags of colour, charm and a sense of harmless innocence that is kind of endearing. Younger gamers will lap it up, not least for the simple controls and low level of difficulty, and with the new additions and improvement to the camera, this is the definitive version. It isn’t the best platformer you’ll ever experience, but it’s an enjoyable adventure to play as the winter nights draw in.

Too easy for most
Can become repetitive

New Super Lucky's Tale is the definitive version of the game. It's still a stripped back platformer, but new content and a revamped camera make it well worth a look.

You may also like
New Super Lucky's TalePlayful Corp