previous
The World Ends With You -Final Remix- review
random
next
Call of Duty: Black Ops 4 review in progress
0 likes 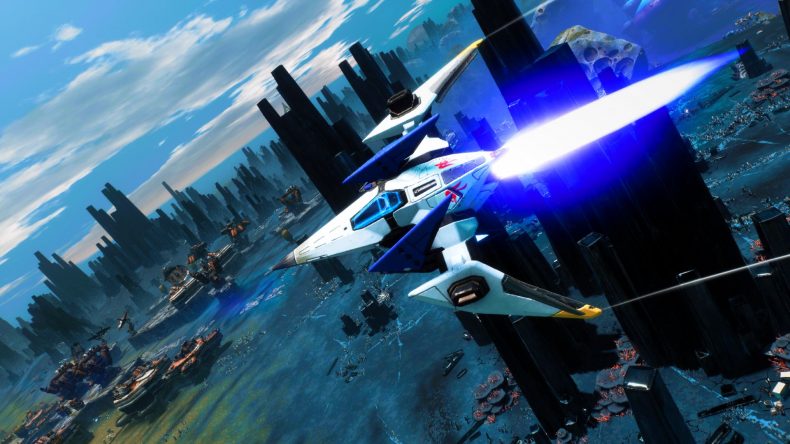 Ubisoft has a thing for big open worlds at the moment. Assassin’s Creed Origins was big, Odyssey is bigger; The Crew 2 gives you huge places to drive around, and now with Starlink you have several whole planets to fly around, explore, and generally harass the local wildlife on. The planets don’t quite have the density of points of interest that we see in Ubisoft’s other RPG-like franchises, but there’s still plenty to see and do tucked away into their ecosystems.

If you’ve missed what Starlink is all about, it’s Ubisoft’s foray into the toys-to-life market and certainly a brave move on their part considering the collapse of LEGO Dimensions, Disney Infinity, and the waning popularity of Skylanders. It’s certainly got the hallmarks it needs, plenty of bits and bobs to purchase, decent build quality, and a rock, paper, scissors weapon system to encourage you to maximise your collection for maximum damage, so at least there it succeeds.

Outside of the toys-to-life thing Starlink amounts to No Man’s Sky but with a story with you being part of a crew on a starship known as the Equinox, taking control of any of the purchasable crew you can fly through the Atlas star system to any of the planets to recruit the population to your cause and put an end to the evil Legion. Observatories are your typical map opening towers, while workshops allow you to purchases mods with which to improve your ship’s stats. As you travel around planets you can find outposts which will join your faction if you liberate them from attacking Legion or Outlaw forces in the area. Your main focus though should be to recruit refineries, and bringing these to your cause gives you a constant source of Electrum (seemingly the currency of everything in the Atlas system). If refineries are upgraded then they produce more Electrum at a decent lick, more Electrum means more upgrades for the Equinox and your faction structures, not to mention purchases from your allies.

To recruit a structure you’ll normally be asked to fulfil a request for them, what’s disappointing here is that the missions you’ll undertake have so little variation to them. Fetch quests or kill quests aren’t fun at the best of times, but the sheer quantity of them ensures that you’ll be tired of them before long. Later in the game where you’ll need to push back the Legion forces by securing as much of the planet’s resources as possible for your cause, the more you control the weaker the big bad guys are, and the constant repetitive character chatter doesn’t help either.

It’s a nice touch seeing the characters flash up on screen when the comms open, but the voice work is incredibly inconsistent. Star Fox and Razor’s lines are delivered well but Mason, Hunter, and some of the NPC characters are delivered with all the aplomb of a primary school nativity. Mason in particular is incredibly dry in his delivery. Every line of dialogue is voiced as well, so there’s a lot of this chatter to consume and many of the NPCs are voiced by the same people as well: it’s really quite distracting, This is a stunning game though, and as usual it’s nothing short of amazing that it runs so well on the Switch. It’s not a 1080p presentation, but there’s beautiful colour representation and very little in the way of jagged edges across the models, it’s obviously a much less beautiful spectacle in handheld mode but it still plays as well as it does on the big screen when out and about. While there’s no massive universe as per No Man’s Sky, the fact that the transition between planet and space is nigh on imperceptible is an incredible technical feat. Space is full of Outlaw bases, asteroid fields and wreckage to discover as well, giving you just as much of a reason to be in the airless void as well as Terra Firma.

Those models are pretty good too, the weapons and the ships especially have had a lot of attention to detail put into them, with glowing blue engines and the usual sci-fi pipes and wiring conduits modelled nicely. Characters are nice too, with nicely sculpted folds on Hunter’s long sleeves, and good attention paid to Chase’s Afro, there’s some issues with the eyes not looking quite right if you get really close to them, but it’s unlikely you’ll bother looking and they’re certainly no worse than the first generation Link amiibo that Nintendo released. All things considered for mass produced items these are pretty good but are obviously not going to be quite as good as individually painted Games Workshop figurines.

I can’t help but feel this is all slightly misjudged, though. The idea is that you’ll swap parts quickly to ensure you always have the edge in combat, but unless you always have the parts close at hand, transitioning isn’t as speedy as you’d like. You can set the game to pause during equipment swapping, it breaks the immersion somewhat, but it’s certainly a better option that being shot to bits while you’re searching for the bit you want to put in. Keeping those parts close by also only works if you have a table or something close by, sitting on a sofa runs the risk of your favourite weapons disappearing down the side of it, but on the plus side you might just dig up some loose change when retrieving them. They’re not too heavy either. You’ve seen the trailers and where it shows the dock on the controllers that’s exactly how you’re supposed to play. A pilot sits atop the dock; the ship on top of them, and then you clip on wings and weapons. You can clip another two sets of wings onto your ship before you attach weapons to increase your speed and defence stats if you wish, but you cannot adopt a fourth set of wings due to a weight burden on your ship. While playing, though, you’ll barely notice the additional weight on your arms at all.

The game also handles the Switch’s handheld mode well. Any items used in the game are saved digitally for seven days meaning you can swap between them in the loadout screens rather than by the physical act. What this means is that once you’ve loaded in all your pieces you can take the game on your travels with you without having to lug around the models, perfect for a commute or a one week holiday.

Back to the actual game then, and the exploration works well. Discovering new locations, opening Warden Spires and general roaming about is a cathartic experience, it’s really rather relaxing, but some locations in the game you’re forced to do some platforming. Basically, at any point your ship can take to the sky so you’re not always stuck on the ground, but to force you into this your ship will be made to carry an item which is too heavy to allow your ship to fly, so you’ve got to use your jump and boost functions to move from platform to platform until you get to the place where you need to deposit said item. I kind of wish I could meet the person who thought these platforming elements would be a good idea and ask them why. From a flying standpoint the ships are great, the dogfighting is excellent and even ground roaming is perfectly fine, but the twitchy handling of the ships does not translate well to landing on platforms as big as your ship itself, you’ll frequently find yourself landing and gliding off the other end of the platform, or glancing of a ridge and catapulting into the air and back to the ground again. There’s no way around these either so when they become part of the story it’s a toss up as to what will give way first, the challenge, your patience or your teeth.

Starlink shows promise, and it’s certainly a good first attempt at toys-to-life for Ubisoft. But it does feel that more thought has gone into how the models are implemented and the world’s in which they can move through than giving people things to do in those worlds. Legion Primes at least mix things up a touch but when they become a much more frequent occurrence they’re just another repetitive element of the game. Warden Spires at least offer some sort of semblance of a puzzle, but nothing that anyone over the age of twelve is going to struggle with.

I’ll be interested how far into Starlink’s future Ubisoft are planning. Are there more ships and characters due? DLC? Because this is a large star system waiting for more use to be made of it and, realistically, it deserves more of it, too. The worlds are lovely to look at and explore, and swapping your ships parts around is a rather satisfying thing to do as well. Starlink shows so much promise and it’s upsetting that it doesn’t fully live up to that. This is a decent game, even with the annoying platforming and phoned in voice work, but it could be so much more.

Frustrating platform elements and rote missions prevent Starlink from being as good as its promise deserves.