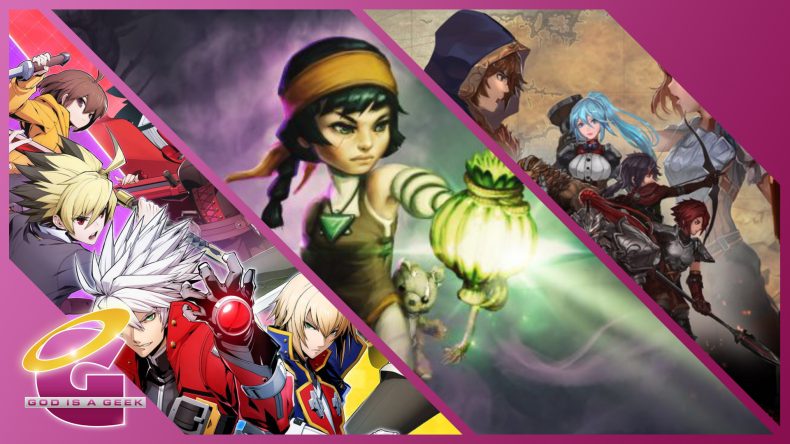 June’s first Re:Port has you crossing fate and start E3 month with a bang. As always, this focuses on the games in general, port quality, any exclusive features, or just why you need to pay attention to or skip a game that’s on Nintendo’s new handheld hybrid home console. This Re:Port looks at Arc System Works’ crossover fighter, NIS America bringing two games to Switch in a single package with exclusive content, a new Curve Digital published title, and a throwback game to the SNES era. The Nintendo Switch finally gets a proper Arc System Works fighter today and what a way to show up. BlazBlue: Cross Tag Battle sees the BlazBlue, UNIST, Persona 4 Arena and RWBY universes collide in a fantastic and accessible fighter that launches simultaneously on three different platforms. I was disappointed that Central Fiction had no portable version but I’m glad the Switch has allowed Arc to do a portable version again.

In terms of content, the PS4 and Switch versions are identical. This is both good and bad. Cross Tag Battle on Switch is a full fledged fighter that runs at a targeted 60fps and is native both docked and handheld. The performance and visuals in handheld blew me away when I first tried the beta and I’m very impressed with the conversion overall. One big difference between the PS4 version and this is anti aliasing. The Switch version, like many Switch games including first party ones, lacks proper anti aliasing. You can read my full review for my thoughts on the game but the Switch version deserved a bit more in terms of features to support the hardware. There’s no local wireless which is a big disappointment. The Switch lends itself to that and all games should support it. I hope they add this in a patch because I’ve had loads of fun playing Street Fighter 30th Anniversary Collection locally. Thankfully, single Joy-Con support is there for two people to play against each other on the same screen.

The real deal breaker is for people who play online because in its current state, skipping the intro during the stage intro and character introduction almost always ends in a super laggy match. When this isn’t skipped, things go much more smoothly. I hope they either fix this or make the intros unskippable to fix this.

Overall, the Switch version is fantastic for everything but online play. The lack of anti aliasing is only really noticeable if you play with RWBY and other characters together thanks to the new sprites versus the older ones. I had no performance issues at all. This game runs like a dream in portable and docked modes. I can’t wait to see them bring more fighters to the platform after this. I just hope a patch improves the online and blocks skipping intros to have better sync between players. Arc System Works has a chance to be the defacto fighting game developer for the Switch right now and I hope they add the Switch specific features like Local Wireless soon. Fallen Legion is a very interesting RPG that has some gorgeous hand drawn art. Gameplay is mostly about the combat which involves strategic action RPG combat. You use the face buttons to control different characters and build up skills to unleash them onto enemies quickly while buffing and debuffing. It takes a bit to get used to but is immensely satisfying. On the story side of things, you aren’t missing out on anything by playing this release which includes everything and a lot more in terms of story and gameplay content from the other versions. I’m also happy to see this get a wide physical release. The PS4 and PS Vita games had limited physical releases but this is the only way to get everything in a single package physically or digitally.

Fallen Legion on Switch has both English and Japanese voice options. It also lets you play with characters from one side of the story in the other side. In terms of new content, there are new playable characters and new levels in addition to a new difficulty mode. It plays and looks great on the Switch. Fallen Legion already looks nice on Vita but playing this on the Switch makes me wish Grand Kingdom shows up because this reminds me of that game a lot.

Overall, Fallen Legion: Rise to Glory is the definitive version by a long shot for these two releases. Developers who port multiple games to the Switch in a single package should add something to incentivize double dips and YummyYummyTummy has done just that. Even if you played these games on either system before, this is worth looking into if you enjoyed your time with Fallen Legion. Solar Sail Games and Curve Digital released a narrative driven survival RPG for PC and Nintendo Switch with a gorgeous art style in the form of Smoke and Sacrifice. I enjoy a lot of Curve Digital’s output because they do interesting games and Smoke and Sacrifice is a great game that’s hidden behind something that needs some quality of life fixes.

Smoke and Sacrifice puts you into the shoes of Sachi who has just given up her son for a sacrifice. After a ritual, she soon discovers that everything is not what it seems and this is where her journey into the underground begins as she looks for answers. I played this mostly handheld and it looked very nice on the Switch screen. Solar Sail Games’ art here is fantastic. The nice atmosphere and the sound design complements the art very well. While the prologue could have been handled better in terms of controls, it plays mostly well. The problems lie in the game itself and not the port. In terms of port quality, there is a bit of input lag and some random stuttering here and there. I feel like there’s too much being asked from the player in terms of tutorials, items, and backtracking. Combat is satisfying and there’s a nice use of vibration feedback as well. A lot of this can be fixed in QOL updates. In fact this is an interesting case of an indie launching on Switch alongside PC and needing fixes. Usually, games launch later on the Switch after various patches and updates have hit other platforms.

If you enjoyed or enjoy games like Don’t Starve and want something like that with a great art style, Smoke and Sacrifice is for you. There’s always a sense of mystery that is nice and the mix of different mechanics works well. The world always seems huge and the game isn’t a short experience. If you’re willing to overlook some of these flaws like the UI problems, you will find a lot to love here. I can’t wait to see this improve over time.

Simultaneously released on PS4, Xbox One, PC, and Nintendo Switch I’m a big fan of retro platformers that have modern conveniences. Many of the great current platformers with a retro aesthetic actually appeal to how these games are in your head as opposed to how annoying some retro platformers are to play. Fox n Forests from Bonus Entertainment is a lot like Shovel Knight in this aspect. While I prefer Shovel Knight overall, I love what they did with Rick (the fox) here and the gameplay mechanics.

Fox n Forests is a platformer with RPG elements that has a generous serving of metroidvania in it. Your aim is to traverse through levels that represent the seasons in a forest that is under the threat of evil. You have loads of attacks at your disposal to take out the various nicely drawn enemies. I love the animation work across the board here. The Switch port is very nice. It plays and looks good on the handheld and I only ran into some slowdown in my time playing. Retro platformers are a perfect fit on handhelds and I can’t imagine playing this on anything else. One thing I would’ve liked is proper HD Rumble support. Blaster Master Zero has spoiled me with how reactive it is.

Overall, Fox n Forests does a lot to appeal to your retro visual nostalgia while playing well in a modern gaming world. It is full of gorgeous pixel art visuals, nice writing, and interesting bosses. I really just wish it had some good HD Rumble and was a bit longer.

You may also like
blazblue cross tag battlefallen legion: rise to gloryReviews