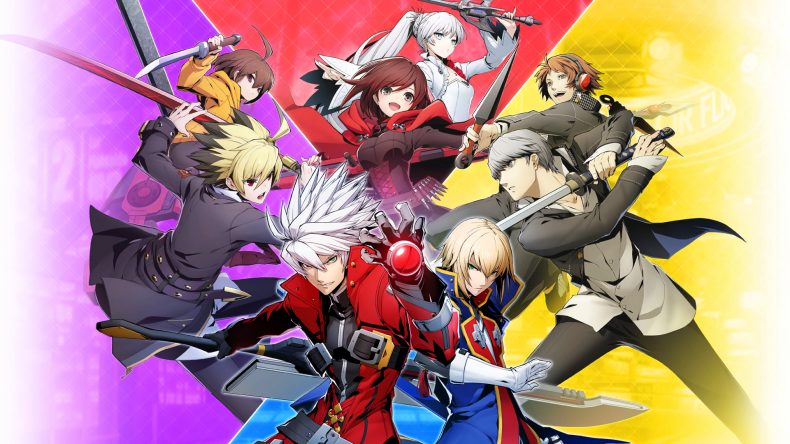 Arc System Works is basically a household name for fighting games at this point and while they’ve usually been a part of the smaller ones mindshare wise, things changed earlier this year with the release of the fantastic DRAGON BALL FighterZ. It has been interesting seeing the team’s output over the last few years as they work on newer entries in franchises I love and also new games. When they announced a crossover fighter, I was excited because of the fan service and mechanic possibilities. BlazBlue: Cross Tag Battle takes fighters from BlazBlue, Under Night In-Birth, RWBY, and Persona 4 Arena and brings them together for over the top tag battle action. This review is based on the North American PS4 build of the game that is being published by Arc System Works. The Europe release is on June 22 on both PS4 and Switch and the fantastic PQube is handling that version. Story modes in fighting games are usually just excuses to get you to either learn the basic mechanics or are just an excuse to put you into random fights with some basic narrative. Thankfully, the good fighters still put in some effort into this mode. In Cross Tag Battle, the story is split up into different episodes for each universe. Each individual episode has its own set of chapters with different interactions and different battles. I’m glad Arc System Works actually put in the effort and resources to doing a full English dub. Central Fiction lacking an English dub after all previous games had one was disappointing. They even got almost all the old voice actors back which is the icing on the cake. Hearing the main Persona 4 cast properly brought back good memories. The voice actor choices for the Under Night In-Birth cast are mostly great. This is the first time this cast has been dubbed into English and Linne’s voice is perfect but I’m not a fan of Carmine’s voice.

This is a two versus two tag fighter and that is the focus. It is super easy to get into with auto combos and very simple to execute special moves for the cast but the real strategy is in chaining them together across your partner and when to unleash your various skills. Thankfully, there’s a fantastic tutorial mode here that goes into every little thing on offer here with lots of ways for you to practice before you jump online. You will feel like an absolute badass with little effort here and the interactions between fighters from different universes in intros and outros never gets old. I’m a big fan of how Arc System Works has been making their games more accessible with Stylish input options for newcomers and this one is probably the easiest to get into. It even supports a single Joy-Con on the Switch (that “d-pad” though).

Fighting game rosters are obviously very important in general but when you have a crossover game for fans of different franchises, they are even more important. In the base game, BlazBlue gets the largest representation with 10 characters while both Persona 4 Arena and Under Night In-Birth get 4 each. RWBY has just Ruby and Weiss in the initial roster with Blake and Yang being added for free later on. The DLC will add nearly 20 more characters across all franchises and this should have been included in the base game from the get go. A lot of the characters are from previous games with the sprites ready and having the game cost more with everything included is arguably a better way of going about this than having a slightly cheaper base game with nearly half the roster locked behind DLC. While it doesn’t have the production values of games like Injustice 2 or DRAGON BALL FighterZ, Cross Tag Battle nails almost everything when it comes to animations and visuals. This obviously is helped by the fact that the sprites for most characters have existed for a while. The only inconsistency is between the newer RWBY character sprites and the older sprites from the other universes. On PS4 this isn’t as jarring thanks to some good anti aliasing but it feels like you’re playing across a PS3 and PS4 game on the Switch when the sprites in question are near each other. There are stages from each universe and some newer ones included and this applies to the music as well. There’s a lot from each franchise which is great but there should have been more new music. I do appreciate them allowing you to set voice language on a per character basis instead of a single toggle that applies across the board. This will be good for fans who’d like to play with the UNIST cast in Japanese but everyone else in English as the actual games or franchises are in the West.

Since the game is already available and has been in Japan since the end of May, lobbies in Japan have been well populated and most of my games were lag free. The online allows you to create or join private lobbies and as is now tradition with Arc System Works fighters, you are represented by a chibi version of a character in the game. The first thing I did was buy Chie to use online. The online menu lets you select between public lobbies in Asia, Japan, Europe, or North America right now, but I only managed getting games in the Japanese lobbies with a handful in the North America one as of this review. Things will no doubt change when the game officially releases in North America later today and then in two weeks in Europe. Outside the sprite and reuse issue in the visuals, the DLC pricing and game price is my biggest issue with Cross Tag Battle. Having nearly half the roster of 40 characters locked behind DLC isn’t good for a fighter. A lot of the stages, music, and sprites are reused from previous games (the RWBY ones are new) and it just leaves a bad taste for me. This could have been a perfect package if it had everything in the base game price with the DLC characters being added for free instead of the current scenario. It is good that they are adding Blake and Yang for free so the RWBY roster is at least playable for free.

If you’re a fan of either of the universes here, this is well worth your time and money. I’m not happy with the pricing when they could’ve just done $60 for everything instead of doing $50 for the base game and $20 for nearly half the roster. Just a $10 reduction in base game price isn’t really worth much in terms of lowering the barrier of entry when fans will want all the characters which ends up costing more than a full priced fighter. Price concerns aside, I’ve enjoyed my near 50 hours spent across both PS4 and Nintendo Switch versions of Cross Tag Battle over the last few weeks. Since the game launched in Japan last week, online has been active as well.

Nearly half the roster locked behind DLC
Inconsistent sprites

Our Score
8.5
SCORE OUT OF TEN
8.5
You may also like
Arc System Worksarc system works americaPlayStation 4