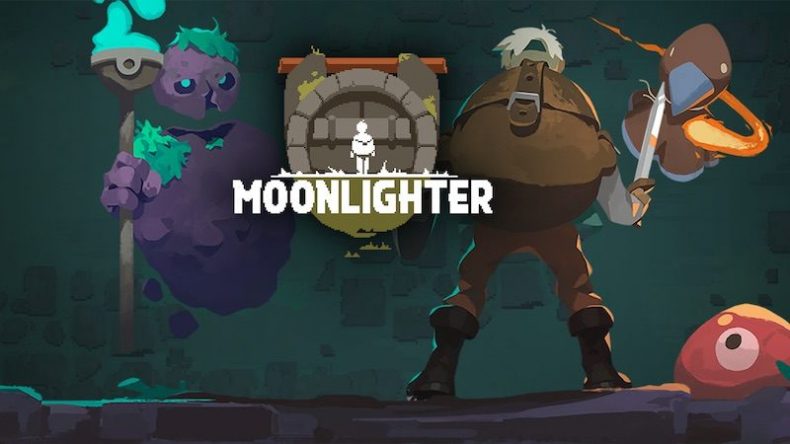 Roguelikes and Roguelites are ten a penny these days, so you might be forgiven for turning your nose up at yet another one to join the fray. There is nothing wrong with the genre, but sometimes it does feel like a new addition is announced every week; so when you hear, “there’s this new game called Moonlighter; it’s a Roguelite,” there is every chance that your eyes will glaze over and everything else becomes white noise.

Stay with me here, though. Yes, Moonlighter is a Roguelite (hey, I see your eyes glazing over, snap out of it!) but it brings with it a unique idea: what if you’re looting dungeons in order to sell the items you find? No, I don’t mean offloading crappy gear for souls, or selling those Feeble Swords of Floppiness for gold; I mean setting out your wares in a shop, deciding on prices and keeping your customers happy. Seriously, imagine a dungeon crawler by way of Stardew Valley. It makes no sense, but it really does work.

There is an ultimate goal in Moonlighter, as our shopkeeper Will dreams of becoming a hero. There are five dungeon doors outside of the town of Rynoka, but the fifth has remained a mystery over the ages and young Will is determined to find a way to open it. It’s a very basic plot, only really serving as a vehicle for the dungeon-delving and item-selling, but there is a rich lore weaved throughout Moonlighter’s world, just hidden enough so that it gives players a reason to keep going back. Of course, you might never want to go beyond the first dungeon, instead deciding to just enjoy grabbing a few things and selling them at your store. This will limit you somewhat, but the game won’t force you into the bottom level of every dungeon. In fact, you could spend all your time in the first dungeon if you really want, grabbing some goodies and returning to your store in the morning. It’s a good job then, that the store portion of the game is so well-crafted. I mean, it’s actually quite addicting, especially when you find new items and have to judge what they might be worth. You even get to know which customer will come in for certain items, while others will actively tell you what they’re after, via little icons in speech bubbles above their head. Markets will change though and you have to pay attention to the way customers react to your products; they may react poorly but still buy an item, suggesting that demand is actually quite low at this point, so maybe focus on something else for a while.

The downside to this is that you have no say in what you find during your time in the dungeons. Everything is randomly generated, including the dungeon layouts, so sometimes you might want to simply place your findings in storage instead of opening the shop that day. Then you can go straight back down into the dungeon and grab more stock, sometimes even discarding items in favour of delving deeper or simply holding out for something new/different. You can’t carry an infinite amount of items however; when you find your bag is full during an expedition, you can use the “mirror,” into which you toss unwanted artefacts for an instant monetary gain. Alternatively, you can simply spend a little gold to allow your amulet to warp you back to town, forfeiting any progress in order to return to your shop with your goods and your head intact. A little later, you’ll be introduced to a way of returning to the point from which you exited a dungeon, but it will cost considerably more than using your amulet. Might be worth it though, if you’re near a boss door and want to ensure you don’t lose everything. This is a Roguelite after all, so death will indeed mean the loss of most of your items. You’ll also be spat out of the dungeon door, through the same mysterious green goop that sucks you in at the start. As you run around, you have a few slots in your inventory that are (I assume) meant to represent your pockets, so if you die, the items there will remain when you’re unceremoniously dumped on the ground outside the dungeon. Anything that was in your bag will be lost forever; there is no picking up lost items from your corpse here, because the dungeons are entirely different every time. This means that you really have to think about how you pack the items you find; do you pack everything in willy-nilly or do you take the time to organise things, like I did?

Stuffing rarer items in my pockets just seemed the logical move. But some items inexplicably need to be place at the top or bottom of your bag, or at the sides; other items will destroy an adjacent item once you leave the dungeon; and others will even send an adjacent item directly back to your shop, among other special conditions. It reminded me of trying to pack Leon’s briefcase in Resident Evil 4; you know, the one he doesn’t actually carry but magically has access to at any moment. Sometimes, especially in a game like Moonlighter, you just don’t question the weirdness of inventory management. Surviving however, is one of the major parts of Moonlighter. If you want to take all these items home, you’re going to have to learn how to fight the various creatures that populate the mysterious dungeons outside Rynoka. This boils down to slashing swords, blocking and rolling, leading to the obvious comparison to Dark Souls. It always has to happen in these types of games, doesn’t it? But beyond the basics, Moonlighter feels closer to the original Legend of Zelda than anything else. Perhaps with a dash of Rogue Legacy and Swords of Ditto for good measure. That said, the combat doesn’t feel anywhere near as tight as any of the games that seemingly inspired it. I lost count of the number of times that I’d swing my sword, only for the animation to move me into an enemy’s path and needlessly cost me some health. It may seem like a petty thing to complain about, but when it costs you everything when you die, this seemingly minor issue becomes quite a major one.

Boss fights are impressive, mind. They’re big and impressive, with some fantastic designs and huge rewards. There is also a nasty beastie that doesn’t seem to like you pilfering goodies from its dungeons. As you fill your bag with loot, your amulet will begin to pulse and soon after, an eye will appear in the bottom left corner of the screen, searching for you. Take too long and you’ll discover just what takes exception to your looting. Panicked amulet activation will soon follow, I can assure you. It‘s a little bit like when Death used to rock up, in Gauntlet.

Sometimes there are ideas that are so incredibly simple that you cannot believe nobody has thought of them before, and Moonlighter is one of those ideas. It takes a simple premise and turns it into a game that is a joy to play, even when it’s killing you or stealing items from your store, after it’s taken a little too long just to set the price. With its gorgeous pixel art and the old man that gives you the “it’s dangerous to go alone,” speech before handing you a sword and shield, there are just so many reasons to enjoy Digital Sun’s fantastic game.

Whereas normal Roguelites are content with the loop of combat and loot gathering, Moonlighter’s idea of selling gathered loot in your own shop is ingenious.

Moonlighter hits 500k and will get Between Dimensions DLC this summer

Moonlighter devs share their ideas for the game going forward

Moonlighter is now available on PS4, Xbox One, and PC