Moonlighter devs share their ideas for the game going forward 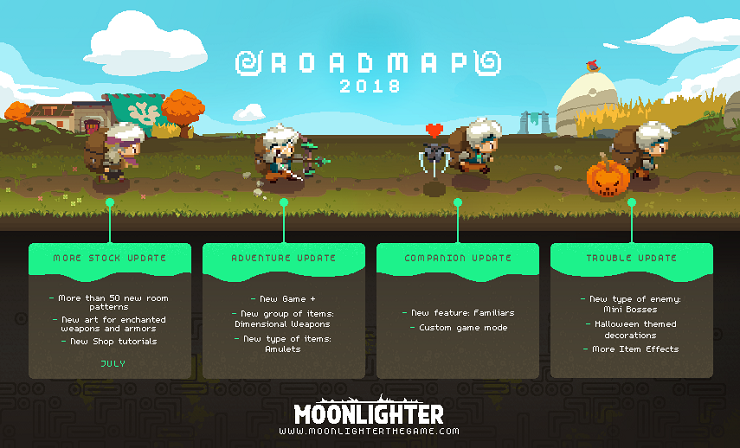 In this day and age it isn’t uncommon for games to evolve beyond their launch and Moonlighter from 11bit Studios and Digital Sun is no different.

Released back in May on PS4, Xbox One and PC the developers of the roguelite RPG have received a bunch of ideas and want to implement some of them into the game alongside some of their own, and they will continue to support the game into next year.

First up is that the game is going to get 50 new rooms, meaning that there will be up to 600 room patterns available, this in turn will give you better looking armour and enchanted items.

There’s also a New Game+ mode in the works for those of you who like a challenge. Along with this there will be new and more powerful items to unlock.

A Companion update will come next allowing players to pick someone to go adventuring with them, each companion will have different abilities that you’ll need to weigh up before you venture out. In this update there’ll also be a custom game feature allowing you to change certain parameters to make your own bespoke adventure.

Finally there’ll be a new set of tough mini-bosses for you to defeat, but details are scarce because the devs want them to pound you into the dust.

Also on the horizon are an official soundtrack and a Nintendo Switch version, both to hit in 2018 but with no set release date as yet. Gary reviewed the game back in June giving it 8/10, so it’s probably worth a look because not all his opinions are bad.

A lover, not a fighter and an all round good guy (he would say that, he wrote this after all), he's happy to be here as part of GIAG.
MORE LIKE THIS
11 Bit Studiosdigital sunMoonlighternintendo switch