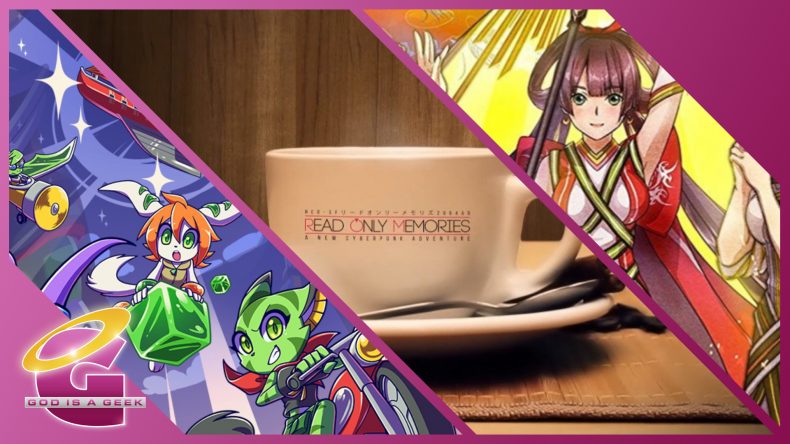 While we usually have a Re:Port Review basically each week if not multiple in a week, we’re now in peak season and I’m recovering from an injury on my left hand which slowed things down when it comes to Switch port reviews. Thankfully, I’m now back and nearly a month after Re:Port Review #27, a new Re:Port emerges covering a 2064, Victor Vran (Mick Fraser is on this one), Freedom Planet, and NIS America’s definitive God Wars release.

Mick Fraser
Originally released on PS4, Xbox One, and PC and scored 8/10 It’s still kind of weird to me that Haemimont Games chose Doug Cockle to voice Victor Vran, given the piling similarities to his other, hugely famous alter ego, Geralt of Rivia. In fact, there are lines in the script that, if you close your eyes, you’d swear were being muttered by the White Wolf himself. The biggest difference between the two characters of course, is that one slays monsters in a fantastical alternate version of Dark Age Europe, while the other slays the undead in a fantastical alternate version of 19th Century Europe. I mean, they’re chalk and cheese.

Tributary casting aside, Victor Vran is actually a very different game to The Witcher. It’s more akin to Diablo, in fact, as you guide the gravel-voiced demon hunter through a series of perilous dungeons, gathering loot and gold, and spamming special abilities to vanquish a horde of undead monstrosities. It would be easy to label it a clone, but it has enough ideas of its own to outgrow that label pretty quickly.

For a start, it has an interesting skill system that let’s you assign devastating attacks to an Overkill metre. The more enemies you take out, the quicker the metre fills. Modifying tarot cards can also be equipped to grant special buffs and abilities, once you’ve levelled up enough, of course. While you can swap out weapons as and when you choose, you can only equip one at a time, so you can’t wade in with a shotgun and pull your hammer out when it gets tough. It feels like an omission and doesn’t make much sense when you consider there’s only one character and no real classes; it would have been better to let you create a multitasking badass and level him up down different paths.

Anyway, the story takes place in darkest Zagoravia, where Vran’s friend Adrian – a fellow Hunter – has gone missing. After entreating the Queen of Castle Zagore for entry into the cursed city, Vran searches for clues as to Adrian’s whereabouts. Split between the main stages and smaller, bite-sized dungeons, gameplay is 70% laying the smack down on zombies and 30% smashing pots and trying to jump through magic walls to find treasure. Uniquely for the genre, Vran can double jump off vertical surfaces to reach high ledges. It’s an underused mechanic, but can also be handy for quick escapes. Oddly, there are a few doors that can be jumped straight through instead of opened, which I’m sure is a bug.

Minute to minute combat is fast-paced and colourful, while occasional boss fights are much longer, sometimes drifting too close to boring and aggravating. Switching between weapons and trinkets in your inventory to better tackle a given situation is as close to tactical as Victor Vran gets but at least the option is there.

A co-op functionality adds another layer to the game as you blast through levels with a friend or, should you choose, there’s a “casual mode” for people who just want to feel godlike for a while. The Overkill Edition launches with both DLC campaigns, too, the first of which barely matters because the second is Motorhead-themed, and sees Vran receive magical guitars from Lemmy himself with which to righteously vanquish the demonic masses. A purely Motorhead soundtrack accompanies this most metal of offerings which, despite its tongue-in-cheekness, delivers an exceptional mini campaign.

My only complaint is that the Switch version doesn’t add anything. No touch or motion controls, no new outfits or exclusive gear, just the same game with zero extra trimmings. It remains excellent but feels like the easy option. Thankfully the Switch copes very well, even with a mass of enemies writhing around the screen. That said, on the smaller screen the characters are so small you may have to strain to keep an eye on old Vic.

Victor Vran remains a wonderfully atmospheric dungeon crawler filled with things to love, from Victor himself to the disembodied voice that provides new intel, hints, tips and sarcasm, including a large number of anachronistic easter eggs. The Switch version may not add anything, but what’s here is still a fantastic package and a very welcome addition to the Switch’s library. Four years after debuting on PC platforms, Freedom Planet is finally out on the Nintendo Switch and GalaxyTrail’s action platformer is finally on a portable. Freedom Planet always got a mention alongside Kero Blaster and Cave Story when some of my friends who play loads of indies discussed some of the PC only (at the time) indie releases. In fact, after finally playing it over the last few weeks, I can safely say this is the game I’ve wanted after Sonic Mania Plus.

Freedom Planet started out as a Sonic fan game after all but the final product that has launched on Switch years after hitting other platforms is super polished and a game that will feel right at home to 2D Sonic fans. It feels like a Sega Genesis game that has been dug up for modern platforms and I say that in the best possible way. You can experience Freedom Planet in Adventure Mode that has story segments with voice acting in between levels or Classic Mode which is just levels. Gameplay feels like a good combination of beat em up combat with 2D Sonic and a nice dash of metroidvania making the package pretty compelling overall just for that. The gorgeous visuals and great music are icing on the cake. The developers have also nailed the 2D Sonic like movement here.

The Switch port is pretty barebones with no touchscreen functionality or good use of HD Rumble. In terms of visuals and performance, it is excellent but no additions in any form are disappointing. I’m glad all three of the games I was recommended are now playable on the Switch and XSEED and Marvelous Europe have done a lovely job bringing an indie that is perfect for Switch to the platform. I hope it does well enough to get a physical release in the future. This is on the same level as Sonic Mania Plus for me so if you enjoyed that, get on this as soon as you can.

Originally released on PS4, PS Vita, and PC and scored 9/10 The Nintendo Switch version with the various control options should’ve allowed for the best of every other release in a single package but as of now, it is missing any sort of touch controls. While many will likely not care about this, it is disappointing when there are versions of the game with touch support and the Switch has a nice touchscreen. Outside of that, the port is superb. There is great HD Rumble use and the exclusive content is actually worth a double dip.

The INTEGRAL content includes a full soundtrack with a vinyl player visual, a sidestory that’s actually worth playing, a digital artbook in game, character profiles, and a whole section of trailers and promotional videos for the game. Each of these sections has lovely art and I’m surprised at how well thought out the additions are. Most ports should include trailer showcases and concept art for new platforms and 2064: ROM INTEGRAL nails everything.

2064: Read Only Memories INTEGRAL is the best version of a great adventure game. Outside of the lack of touchscreen support, this is basically everything I wanted in a port of 2064 for the Switch. If you’ve never played this before, this is the version to get.

Originally released on PS4 and PS Vita and scored 7/10 NIS America has been great with localising Kadokawa’s titles for the West alongside PQube. NIS America recently brought out The Lost Child on PS4, PS Vita, and Switch from Kadokawa and are now bringing the previously PlayStation exclusive God Wars: Future Past to Switch alongside a big update and expansion to the PlayStation releases. The expansion which is sold separately for those platforms is built into the Switch release from the get go making this already worth it for newcomers to the game but the Switch port quality is something I was interested to see.

God Wars: The Complete Legend has loads of improvements and enhancements in addition to new content on top of the expansive base game. When it comes to what has improved since launch or what the Switch offers compared to the other versions’ original release, faster battle animations, new playable characters, new game+, new music, more endings, are just scratching the surface. The Complete Legend release feels like Diablo III’s Ultimate Evil Edition with even more story content than the base game. The Switch port doesn’t have any touchscreen functionality which is disappointing because tactical and grid based games work well with touch.

While the Switch port is definitely the best version of the game thanks to the play at home or on the go aspect coupled with all the content right from the start at a lower price than the base PS4 release last year, the game itself might not resonate with you unless you enjoy the art style. While the actual gameplay is pretty straightforward, the Japanese myth and folklore style visuals are the real draw. If you skipped God Wars on PS4 or PS Vita, this is definitely the version to get. It looks and plays well in both docked and handheld settings.

Read Only Memories comes to iOS in March, Nintendo Switch in April