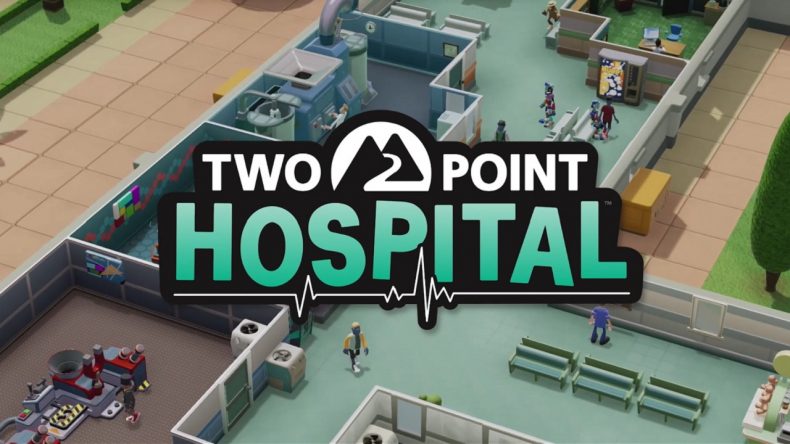 Remember that period during the Nineties, when Bullfrog’s management sims and god sims were all the rage? Theme Park, Dungeon Keeper and Theme Hospital were big successes and are still fondly remembered today, despite the genre seemingly having been forgotten. At least in terms of the mainstream gamer.

Much like its inspiration, Two Point Hospital puts you in charge of running various medical centres; managing everything from the building of new wards and treatment rooms, to the hiring and firing of staff, all while making sure the books are balanced. You’re eased into things quite nicely, even allowing idiots like myself to build and run things without too much fuss. The game’s interface is incredibly simple and easy to use, always just a few mouse clicks away from building new rooms and adding various items to keep people comfortable and entertained as they await their treatment. Building new rooms is as easy as selecting the one you want, usually beginning with a GP’s office, before clicking and dragging the cursor across several squares on the grid-like floor of the hospital. Once you’ve reached the size you want, you simply add a door and some furnishings (with some improving the “prestige” of the room, which helps to keep the occupants happy as they work) before clicking the tick icon. After that, you look into hiring a doctor by selecting the “hire” tab and finding a qualified candidate for the position you want, before dropping them into their new space. Of course, you’ll need a reception desk at the front of your hospital too, and hiring an assistant to run the desk is exactly the same as hiring a new doctor.

The game walks you through all of these things throughout each and every scenario within the game. As you improve and complete the various objectives of a hospital, you’ll unlock new ones with their own challenges and new things to learn. Various new diseases will be discovered, such as “light headedness” which literally sees people with lightbulb heads walking into your hospital’s reception. Mock Star is a particular favourite of mine, as little Freddy Mercurys come dancing through your doors; though why they’d want curing, I’ll never know. As these new illnesses are uncovered, you’ll require new treatment rooms to deal with each one; a Pandemic patient with an unnatural attachment to kitchen utensils, namely a pan stuck to their head, will need a “Pans Lab” (Guillermo Del Toro fans will love that one) that uses a giant magnet to remove said pan.

Of course, treatments sometimes fail. Despite the heroic efforts of your nurses, the equipment sometimes doesn’t do its job effectively and it can sometimes be fatal. Somewhat frustratingly, this often seems to be down to random chance, rather than the quality of the equipment and the competence of the staff running it. Even with upgraded machinery and staff that are trained to within an inch of their lives, sometimes treatments simply fail. Whether this was intended to represent the reality of life, or is just a fault of the game, I’m not sure; but if it’s the former, I can’t help thinking that this colourful and fun game is not the place for that kind of commentary. This issue becomes especially problematic as you progress further into the game. With more and more illnesses to diagnose and extra treatment rooms required; when a treatment fails and you see a patient die, you can’t help but feel a little helpless. By the time you reach the third hospital and you’re having to build several GP’s offices to cope with the large numbers of patients coming in, you’ll begin to see the overwhelming nature of the old Nineties management sims seeping into Two Point Hospital.

Luckily, you can step away from a hospital at any time. If you feel yourself losing control of a bigger hospital, you can retreat to the map screen and return to an earlier scenario, perhaps with the aim to improve its star-rating in order to earn more money and Kudosh; which allows you to unlock new items to place in your hospitals. Or maybe you just want to slow down a little and breathe, while watching your little doctors, nurses and janitors go about their daily routines.

The AI in Two Point Hospital is outstanding, quite frankly. In most other management games, the level of micromanagement required to keep everything going is usually ridiculous. You’d have to deal with every problem manually and let’s face it, that’s just not fun. Nor is it acceptable in today’s games. So, when a machine breaks down, it’s good to know that, if you have a janitor with the repair ability, they will automatically be assigned to sort it out. Likewise if a member of staff goes on their break, if you have an equivalent doctor or nurse available they will make their way to the vacant room and continue to treat patients without you having to lift a finger. Equally outstanding is the gorgeous visual style of the game. It manages to capture the cute, cartoony look of Theme Hospital, while modernising it and bringing it into the realm of 3D graphics. Characters are ever-so-slightly caricatured, with minimal shading to give them a low poly look. Absolutely everything, even the ghosts of fallen patients, is designed to look as adorable as possible. Amusingly, Two Point Studios has even gone to the trouble of rendering little butts on ward patients, as they wander around in those little backless gowns that any hospital patient will remember from their time in care.

Two Point Hospital may have a couple of flaws, but it really is a spectacular amount of fun to play. You’ll smile at your first sight of particularly daft illnesses, and you’ll feel a sense of reward as the end of year rewards come around and you get that award for best employer. You’ll panic at the news of an impending health inspection, but realise that you’ve got everything under control because the game has taught you so well. It’s just a shame that it’s so difficult to go a year without losing a patient, but I guess that’s just hospital life.

Treatment success sometimes feels random
Can be quite overwhelming, later on

Two Point Hospital is a triumphant return to the fun and frantic style of Nineties management sims, with the adorable visuals to match.