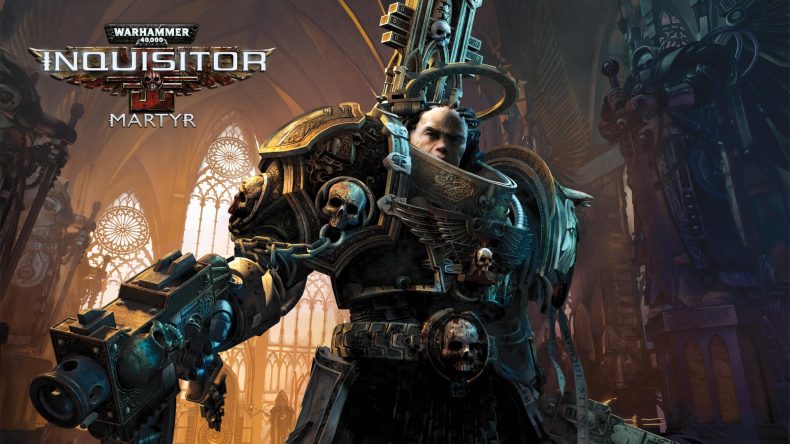 The premise behind Warhammer 40K: Inquisitor – Martyr suggests that it should be immense fun, gunning your way through a far-future hellscape, hoovering up loot and spamming special attacks like an even more metal version of Diablo 3. And for the first seven or eight hours, it is. It throws new ideas at you in such quick succession that you don’t have time to stop and ponder whether they really work or not, and the story is captivating enough that you want to find out just what the hell is happening aboard the Martyr, an enormous Fortress Temple floating in Chaos-controlled deep space.

A split will undoubtedly appear between fans of Games Workshop’s bleak, war-ravaged future and those who can’t tell the difference between a Tyranid and a Gene-stealer, but those without a clue might actually find enough to keep them invested anyway. The story is one of Martyr’s stronger elements, presenting a compelling mystery voice-acted with just enough grandiose posturing to remind you that this universe only takes itself 90% seriously. It follows the titular Inquisitor, a kind of Judge-Jury-Executioner type with a flexible moral compass created to slay demons, aliens and rogue servants of the God-Emperor, Warhammer 40K’s immortal ruler of the Imperium of Man. You assume the role of this Inquisitor, newly arrived on the derelict ship, as they delve into the horror that befell the recon teams who came before.

There are three main classes to choose from: tanky Crusader, spell-slinging Psyker, and stealthy Assassin; but each has three further sub-classes that offer specialised paths. I played primarily with a Sniper-focused Assassin, for example, and had fun mixing high-powered headshots and precision explosives with dual-wielded blades for when the enemy got up in my personal space. However, as the difficulty increased along with the number and strength of the enemies I faced, I found myself struggling to the point that I chickened out and re-rolled a Crusader, whose ridiculously oversized sword-and-board weapon-set proved far more effective. Bear in mind I did this to aid my own progression through the story, whereas if I had chosen to simply take my time and level up, I might have eventually found the Assassin path easier. The Psyker I simply didn’t gel with, as his devastating psychic abilities simply weren’t enough to help me keep his squishy frame in one piece. My point is that all the classes are very different, and all are totally viable choices, but the honest truth is that the Crusader is without a doubt the easier route.

One of my biggest complaints with Martyr is that the skill system isn’t tied to your class, but to your gear. While certain weapons are designed with specific classes in mind, your mapped abilities are determined by what you’re wielding. Levelling up allows access to new weapon types and corresponding attacks, but ultimately you’re not building a badass. You’re already kind of a badass, and you’re just adding stuff to it. It would help if the actual upgrade paths weren’t so generic. For instance, it takes ages to gain an XP level, which then opens up trees based on how you’ve been playing. If you’ve been dishing out a high percentage of ranged damage and criticals, you’ll earn a skill point in those areas, which you can spend on stuff like +1.5% Ranged Damage, etc. It’s not very tactical or stimulating, but it gets the job done.

Unfortunately, it soon becomes apparent that simply getting the job done is Martyr’s overriding theme. There’s an awful lot of gear, found in chests and dropped by enemies and bosses, but you’ll stop caring about the abundance of stats on it soon enough and just starting looking for the increased Quality, denoted by a simple red or green percentage indicator when you compare two pieces. Weirdly, your gear becomes under-levelled superfast, too, which means you’ll have little time to get attached to a specific stat boost anyway, and are better off simply equipping the best piece that drops each time. It’s the same for weapons, although to a lesser extent. Damage and HP-steal are pretty much the go-to stats for every weapon, although each type behaves so differently that playstyle will, thankfully, become a factor. Shotguns are devastating at close range, obviously, while sniper rifles do the exact same job but over distance. Laser guns have a heat bar instead of ammo, while auto=cannons mow down enemies with brutal efficiency. Melee weapons aren’t particularly original, but follow a standard one-handed, two-handed, dual wield set-up that will be instantly familiar to genre fans.

Another idea that deserves a mention but doesn’t quite work is the cover/suppression system. Pressing L1 will put your Inquisitor into a cover position, allowing you to lay down fire while, hopefully, taking less damage. However, cover rarely lasts long, and enemies will either destroy it or directly assault your position, forcing a move. Also, the cover itself is often facing the wrong way, meaning you can’t actually put it between you and the enemy. It never feels like your using the environment like it does in a 3rd-Person shooter, and instead comes off as a little useless. On the other hand, there’s suppression, which is the enemy’s ability to keep you pinned down. A higher suppression stat means you can whether a barrage of enemy fire and continue to return damage, but it’s a separate stat to health and armour, which kind of doesn’t make a lot of sense.

As you progress through the story you’ll find new allies and bring them back to your Bridge, where you can, eventually, customise your armour, tweak biological perks and tackle co-op missions. Playing with others actually elevates Martyr to a certain extent, because it can be a lot of fun even if it doesn’t feel essential. It’s just a shame that the classes are intrinsically designed as such lone wolves. There’s no synergy between abilities, you see, meaning that even when playing with a friend you still feel like a solitary kill-machine. Enemy design is a problem in either mode, however, as a lack of true variety means that most mobs simply advance on your position, shooting, swinging or throwing area-of-effect attacks at you until you squib them. There’s little AI on display, which again doesn’t help the cover mechanic much. The sheer size of Martyr is a double-edged sword. On one hand, it’s great that there’s so much content. The Star-Map is enormous, fit to bursting with star systems, planets, moons and stations to plough through. The story will lead you on a dark, chaos-haunted path through most of it, but there are a lot of side missions and lesser concerns to get stuck into as well. The problem is that after a few hours the missions and the environments (from frozen tundra to poisoned swamps, or fiery hell-pits to industrial corridors) begin to feel very samey.

Warhammer 40K: Inquisitor – Martyr is an enjoyable enough adventure that bravely attempts to present new, interesting ideas only to be weighed down by them all. From the convoluted progression system to the mostly broken cover mechanic, everything just about works, but nothing really blows you away. Fans of Games Workshop will lap this up, and those hankering after a new Diablo-like loot-em-up will find an awful lot to like, of not to love, but overall Martyr doesn’t quite live up to its awesome potential.

An enjoyable enough adventure through Warhammer 40K’s dark future that never quite manages to exhilarate you.