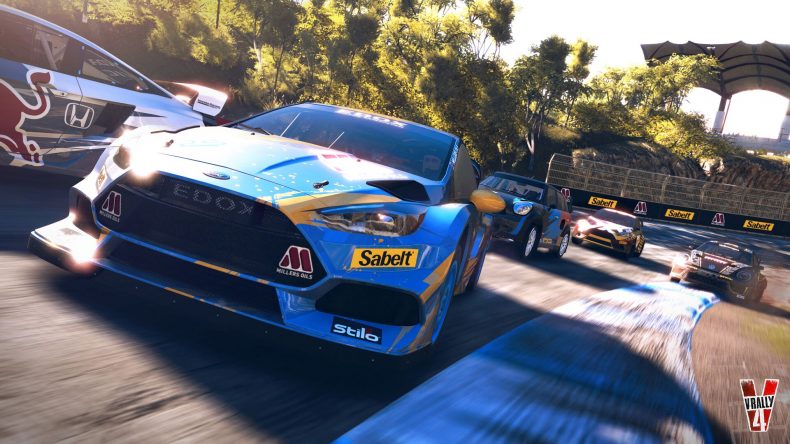 I remember enjoying V-Rally back on the original PlayStation over 20 years ago now. Man, that makes me feel old. It was before Colin McRae Rally’s sim-like effort arrived on the scene, but it was probably the closest thing to a Sega Rally game released on Sony’s machine. This was back before Sega became a multiformat developer/publisher, of course. I distinctly remember V-Rally being a colourful, almost arcade racing experience and really quite fun.

As I said, over 20 years after playing that original game, I sat down to play V-Rally 4 on PS4. I won’t beat around the bush here: this is not a good game. There are some things to like about it, but none of those things have anything to do with the most important parts of a driving/racing game, which is to say the handling and the AI.

Like most driving games, especially the rally variety, V-Rally 4 starts you off with a brief tutorial drive. You will be talked through a few things, but none of them really help you learn how to drive, which, in retrospect, should have set my internal alarms ringing. What did get the klaxons going was actually trying to drive the cars in the game. The handling is incredibly twitchy one moment, then super grippy the next, before finally deciding that it doesn’t want to go any direction that you choose. It’s incredibly inconsistent, leading to an experience that never feels fun. This lack of control only gets worse as you begin to drive the faster cars in the game. Even on tarmac it’s nigh impossible to get a car moving in a straight line, which you could argue is realistic at high speed, and I would accept that if that happened consistently, but there are times during races that your car’s handling actually feels like it changes from lap to lap. It’s infuriating.

On top of this, the game’s AI difficulty is borderline broken. V-Rally Cross races are often too easy at the basic difficulty, with the odd exception when one of your opponents simply decides to shrug off the rest of the pack and will fight you for the entire race. That’s probably the closest thing to fun that I experienced. A standard V-Rally, however, racing against the clock instead of opponents on the track, again shows another inconsistency within the game. I mostly had no issue getting the top time on these events, but suddenly I found myself ten seconds behind at the very first checkpoint during one particular rally in Kenya. By the end of that stage, I was nearly a minute behind the competition, despite a completely clean and fast drive. I tried several times, getting the same result each time, and concluded that it simply was not possible to reach the end of the stage in the times posted by the AI. This began happening more and more, which led to me genuinely switching the game off in disgust. V-Rally 4 does at least offer a few different types of race events, all over the world in a number of different climates. Alongside V-Rally and V-Rally Cross, there are buggy races, hillclimbs, and Extreme Gymkhana, which sees you taking on some fairly unbelievable tracks with some vertical challenges that’ll test your skills as well as the dodgy handling. Handling issues aside, these different events take place in some fairly pretty locales. From the snowy Russian countryside to the tropics of South America, it looks quite pretty in 4K on PS4 Pro. The cars themselves are nicely detailed; all real, licensed vehicles that can be upgraded in career mode to be more competitive. Shame it won’t help you catch up to the unrealistic times set by the AI.

I tried hard to like V-Rally 4, I really did. It just doesn’t know whether it wants to be an arcade game or something slightly more realistic, and it ends up being neither as a result. It just is not fun to play, and although it has a sizeable career mode to keep you going for a while, you really won’t want to. When the competition includes the likes of Dirt Rally, Dirt 4 and even the recent WRC titles, not to mention the excellent Wreckfest, V-Rally 4 simply isn’t good enough. The series should have stayed as a memory.

With so many great rally games already available, V-Rally 4’s poor handling and inconsistent AI just can’t compete with its competition. It should have stayed as a fondly-remembered retro series.