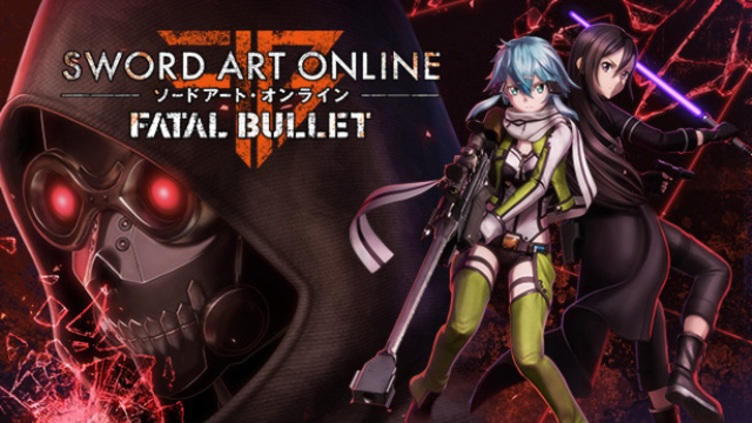 VR is still in the infancy of its rebirth, it’s a fractured platform with several different ways in and a raft of different experiences from platform to platform. Sword Art Online foresees a range of Massively Multiplayer Online RPGs with VR as the hook that gets you immersed. After all the times spent fighting dragons with swords and spells now you’re going to be fighting with guns.

Fatal Bullet takes the franchise’s characters and puts them into the world of Gun Gale Online, a ‘world of guns’ as the characters themselves constantly remind you. This time around you create the protagonist and join your friend Kureha in a mission to get a rare item. You see, the game’s makers have just released a new update and this introduces a new area called the SBC Flugel, and these new rare items are the key to accessing it. In true serendipity Kureha ends up accidentally teleporting you to it, you find the ArFa-Sys and wind up as it’s master.

Dicking around with the character creator is a good start, here you’re given a choice to make yourself as big or as small as you want, and outfit your character with a range of tried and tested anime design tropes. What is different here though is that gendered hair cuts, make up and the like are not limited to your selected gender, so you can make a male character and then make them as incredibly girly as you like, or the opposite if you so prefer, it may seem inconsequential, but I don’t believe I’ve seen this in a character creator before. Once you’re through with that it can take a long time to get into the game. It’s incredibly talky, and aside from a quick tutorial you’ll find your first actual combat nearly 2 hours into the game. Fatal Bullet wants you to meet all its characters, I mean, it’s part of a franchise after all and it wants to remind you of that, so the name dropping and recognisable faces are all trotted out to ensure you’re reminded that the series exists despite the different way combat is implemented. Gunplay is tight and fast, you have an auto targeting system that will lock on to whatever is closest to your reticule allowing you to hit it although at distance the amount of times you’ll hit will diminish. However, you can turn this off and manual aim at all your targets, either way is fine, but auto targeting isn’t going to see you scoring a lot of those all-important critical hits.

Movement and traversal is decent too, characters can run across most surfaces and inclines, have decent jump distances and can vault over things you jump at, what’s missing though is the lack of sticking to cover, or even being able to conduct combat when in a crouching position, when a lot of enemies are targeting you it makes it difficult to quickly get into cover and get out again to when the suppressing fire stops. There’s also a grappling hook that can be used to aid with your traversal in the overworlds or dungeons, just make sure you’re close enough and fire and you’ll be propelled to where you just aimed, be sure to press jump when you get to the other end though or you could find yourself falling down a hole. I just wish I could remember it’s name.

Remembering small details like the name of a particular item is a failure that will become common in a game such as this. Fatal Bullet is absolutely layered in systems, they’re built on top of one another, over and over making it extremely easy to forget something. As you make kills, you get achievements for the gun you’re using, which unlocks skills to use, such as healing bullets, or damage mitigation, and of course you’ll also get XP, which then grants skill points to allocate to attributes to enhance your survivability. Guns themselves require different types of bullets, come in common, uncommon, rare, variants and also have ‘memory chips’ which bestow the gun with a range of buffs such as more damage to mechanoids, or better critical hit chance. You can also enhance these guns, by transforming them. Here you break down a weapon and bestowing another one with the memory chips from the one that was sacrificed. You can also enhance guns to increase their attack power or increase their bullet loads, but the material requirements for this are extortionate to say the least. You can also get accessories which will increase your defences, and all of this has a weight attached to it, which then fills up an encumbrance meter. Don’t want to slow down? Then you better make sure you increase your strength stat to stay mobile. They literally keep piling this stuff on, so you’ll be making regular trips to the Database menu to remind yourself of a mechanic you’ve missed.

If imitation is the sincerest form of flattery then Destiny should surely be feeling good about itself when considering how Fatal Bullet is structured. You use the hub of the SBC Glocken to purchase weapons and ammo, pick up quests and then venture out into an overworld that has dungeons to enter to fight a big bad guy. Unlike Destiny though there’s a lack of inspiration in the way these places look and they’re only memorable for the wrong reason. The dungeons are especially bad, they’re nothing more than a series of interconnected block rooms of repeated textures and identical enemy design. Going to a research facility? It’s got grey metal walls and is populated with robots. A cave? Metal walls and robots. A subway? Metal walls and robots. A lighthouse? Metal walls and robots. The lighthouse is especially irritating because despite how it looks from the outside there’s absolutely no verticality to the interior, no staircases leading to new floors, just the same trudge from start to finish by way of some bullets. Also, considering it’s supposed to be an MMO there’s a considerable lack of people around as you wander the landscapes. You might get the odd enemy player show up for a fight, but these moments are few and far between, which is a shame because when they show up after you’ve just pulled a bunch of mobs it creates a tense scenario where you’re trying to manage suppressing their fire while you take out the enemy NPCs and then move onto taking out the players afterwards. It can be made even more fraught because if you’re not watching your own movements you can generally tend to pull an extra pack of enemies as well, but, it never seems that the enemy players can attract the attention of the enemy NPCs, which is extremely lame.

The only way this is like an MMO is in how much it wants to make your grind, high material requirements being one, but early on you’re stuck fighting hard bosses which you’ll need to grind levels for. Once through them you’ll breeze through a whole bunch of them before once again getting lumped with fighting another boss that’s impenetrable at your level, if you’re going to make your game a spoof MMO then you really shouldn’t try to make it imitate the least appealing factors of them.

You’re accompanied by up to three AIs on your journey, so ensuring you have a good mix of ranged and melee skills for whatever you’re taking on is a priority. Thing is, adding people to your party is never really explained, and I only found out when I just happened to venture into the game’s ‘Friend List’ and accidentally added an extra person to my party. Regardless, their AI is awful. While your compatriots will regularly apply buffs and heal when appropriate they’ll rarely ever seek cover when under attack and will happily stand still while firing when a great big lug is bearing down on them for an attack. As you move around they talk to each other, well, only insomuch as repeating the same lines of dialogue over and over again. Speaking of which, ArFa-Sys can look after your money for you, acting as a bank, and you can also give it an allowance with which it can go out and buy items that you might be interested in. ArFa-Sys also follows you around the SBC Glocken when you move around between quests; this is incredibly annoying because it has a sound bite that it repeats constantly. It’s made worse that the game doesn’t pause when you press options, so while you’re going through menus they constantly chirrup in the background. This got so irritating that I had to turn the game’s voice volume down to get away from it without tearing my hair out in frustration.

Going back to my earlier point, Fatal Bullet just feels like Destiny but hampered by dull and derivative design. The characters look nice despite the fact that the long haircuts clip through character bodies, but the locations really don’t make the most of the Unreal Engine that they’re built in. Weapon noises grate as well, especially when during some fights they get ‘stuck’ and sound repeatedly even when you’re not in combat, the only way to get away from it is by teleporting to another area. Like Destiny, Fatal Bullet at least has decent gunplay, but hampers itself with drab dungeons, and overly grindy gameplay, but still, I do like that character creator.

A slow start to Fatal Bullet makes way for some great gunplay, but that peters out as derivative dungeon design and bullet sponge bosses take hold and throttle the life out of it.

You may also like
Sword Art Online: Fatal Bullet