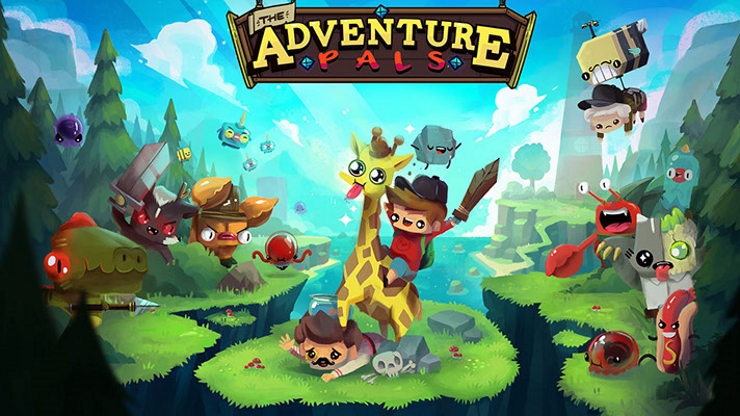 Confession time: I have to admit that I love cartoons like The Amazing World of Gumball. There’s a zany humour there that taps into the sheer insanity I adore in my entertainment. Close to this is a network stablemate Adventure Time, a series that has a wicked sense of humour and, like Ren & Stimpy from my childhood, it has an edge to it – sometimes I wonder if it’s okay for kids to watch.

The thing is, the series hook of Finn and his yellow dog Jake is compelling, and while basic, the quality of animation is brilliant. Now, it should be obvious why I’m mentioning this, because The Adventure Pals wears its love for Adventure Time on its sleeve. The main character is a boy with a sword, and he’s backed up by a yellow stretchy pet (giraffe) that he can also ride on. It’s got a similar taste in humour and also shares a bouncy animation style where everything feels alive, Massive Monster really has channeled Pendleton Ward’s series well.

Borrowing an aesthetic doesn’t work as a detriment to Massive Monster’s work though because Adventure Time hasn’t ever really had a good game, and where they’ve failed The Adventure Pals succeeds. The level design is great and works well for speedy completion. Not that it’s required, and finishing a series of levels quickly without dying and collecting everything will grant you a high rating, but all that will grant you is a smile on your face. Anyway, the whole premise is that on your birthday – where you receive a giraffe – your papa gets kidnapped by a guy looking to turn elderly people into wieners (hot dogs) for reasons we’re not informed of and that is the entire purpose of the plot. As a result you have to quest through side scrolling platform levels moving from place to place by teleporting wells in an effort to gain rubies to pay off the ransom.

What follows is a decent run and jumpy adventure interspersed with good combat mechanics. The fighting is basically executed by pressing Square rapidly until an enemy dies, although you may have to dodge every now and then. Bigger combos mean more XP and as you level up you unlock perks like a bigger backpack or Mr. Rock (not Dwayne Johnson) fighting on your behalf…you know that this sort of humour grants personalities to inanimate objects right?

If there’s a fault to be levied here it’s that the jumping is incredibly floaty and as a result you’ll be fretting over every landing. There’s much to be said for the floating helicopter-style jump afforded by your giraffe’s tongue, not to mention the wall jumping and the edge climb (both staples of platforming), but this doesn’t mitigate the fact that every jump carries with it a certain amount of correction which you will second guess all the way until landing, and it’s hard to feel confident in a system that makes you wonder all the way until the end if you got it right. Each death sees you going back to the beginning but, as a name The Adventure Pals May allude to, this is a game that is better experienced in co-op. Now, I know that’s cliche to say, but a second person flanking you makes the combat just a little easier, and also guarantees that death does not mean the end. As long as your partner doesn’t die immediately after you then you will respawn seconds after, it also adds a degree of hilarity to the platforming.

A healthy tribute to an existing franchise is no bad thing, and The Adventure Pals delivers on an experience its obvious influence has never achieved: a good game. It’s fast paced, expressive, funny and most of all, it’s fun. As a platformer it could do with a little tightening up, but it’s hard to not fall in love with what’s there. If you’re a parent with a Cartoon Network loving kid give this a go, as you’re likely to find a lot of love here for the whole family.

Maybe a bit too close to the subject matter
Floaty jumping

Running and jumping from left to right is difficult to judge, but while wearing the colours of another The Adventure Pals delivers on its central concept in a way it’s inspiration never could.