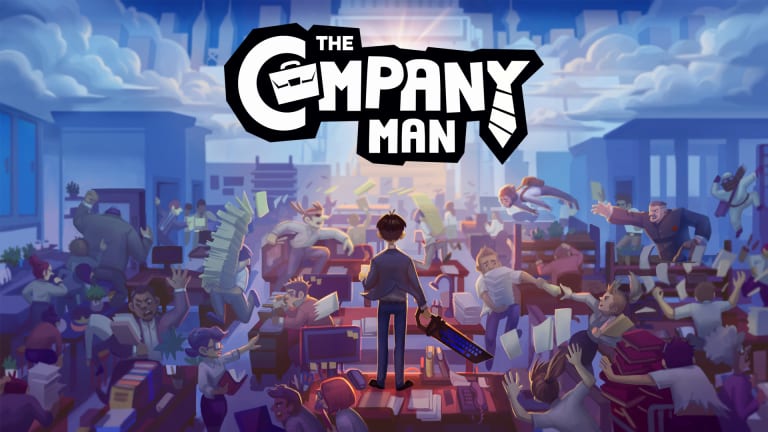 When I think of a setting for a 2D platformer, I think of swinging on vines in a jungle, skidding along the icy ground of a winter wonderland, or furiously jumping to escape desert quicksand. Hopping from desk to desk in an office just isn’t something I’d imagine Mario doing when off saving the princess, but that’s what’s in store for poor salaryman Jim in The Company Man.

As a graduate fresh out of university, Jim is excited to start his new job at The Good Water Company. Working life isn’t as it seems though, as the actions of lazy line managers and inhumane CEOs immediately put his job in jeopardy. After being demoted to the hell that is Customer Service, Jim is determined to make his job work by systematically “firing” all of his corrupt bosses and making his way to the top of the office block. 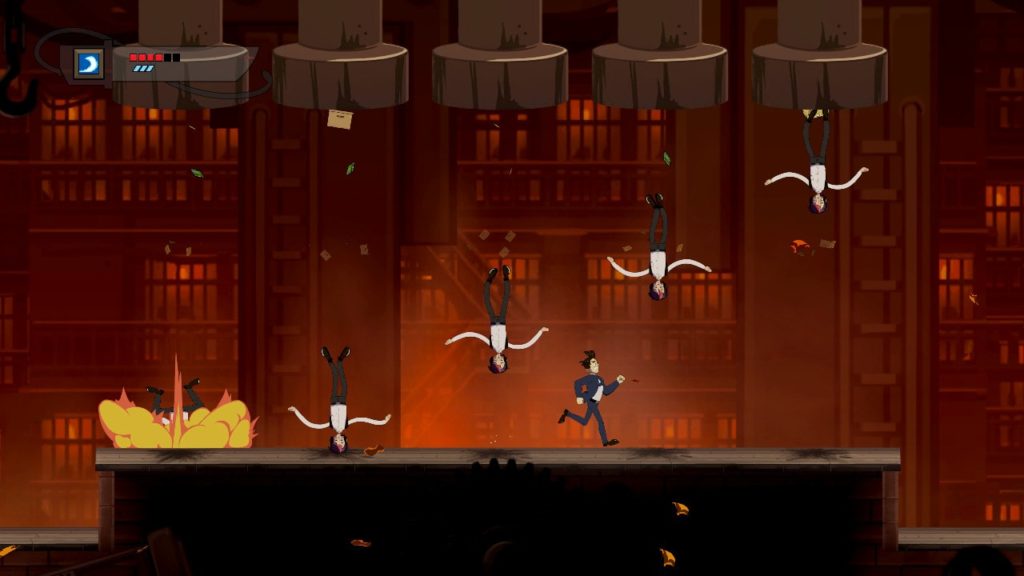 Firing staff doesn’t involve reporting them to HR or criticising their performance at a board meeting. Armed with your trusty keyboard, you simply wander up to an unsuspecting coworker and whack them over the head with it. First and foremost The Company Man is an action platformer, with office supply based combat taking centre stage. Pretty much every other employee you see is out to get you, be it by throwing paper at you in the mailroom or farting into you while spinning on an office chair.

Your keyboard has a pretty depressing range, so you’ll really need to get close to slap a fool, QWERTY style. This means you’ll need to get used to the attacks each foe uses to keep your health points safe. Even basic enemies require you to wait for an incoming attack before jumping into the thick of it, and it’s nice to have to put a bit of thought into each encounter.

Thankfully you don’t have to rely on the keyboard for too long, as each time you beat the boss of the current floor you’ll be rewarded with a new special ability. These projectile abilities really change the game, and are all gloriously themed around sending emails with your keyboard. The standard Email Blaster sends out a strongly worded shot across the screen, Reply All shoots a shotgun blast of emails from your board, and Spam sends out a huge laser of messages for massive damage. These abilities are really helpful if you want to stay safe from damage, and are essential when dealing with a boss. 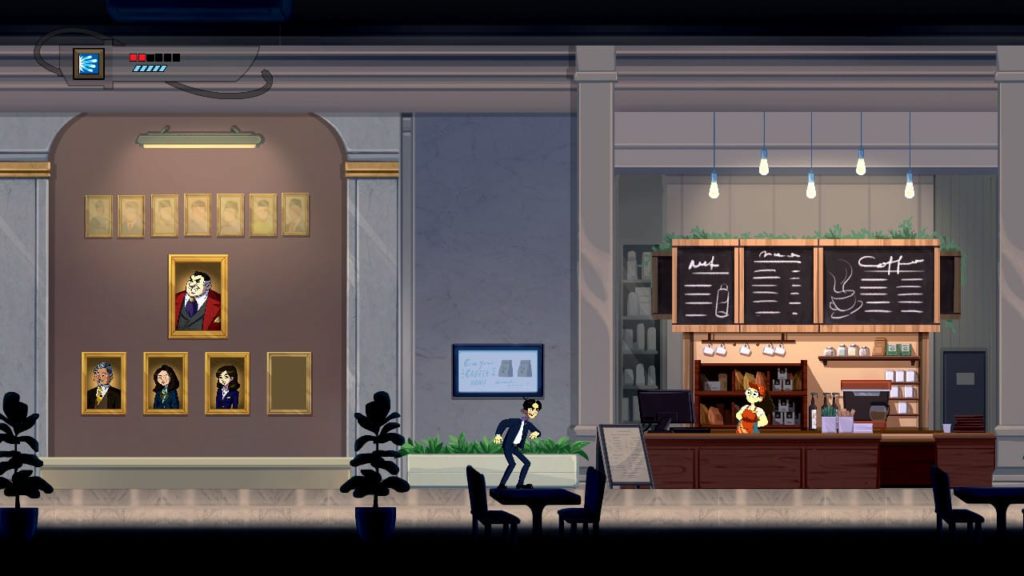 The boss fights are perhaps the highlight of The Company Man. Be they screen sized or just another employee, they always pack a punch and have a vast variety of moves to deal with. Some good old fashioned pattern learning is the order of the day, and it’s really satisfying to finally beat a boss after being battered down five or six times.

The Company Man is a perfectly enjoyable action platformer, but what makes it stand out among its peers is undoubtedly the theme. Each floor of the office is a different department of the business, and is brought to life with some really inventive style. Accounting is an ice world because it’s so boring to work there it feels like life is “frozen”, and you need to dodge frozen assets (icy safes) that fall from the sky. Advertising is a creative hippy jungle full of layabouts on beanbags, and Customer Services is a flaming hellscape with employees locked in cages.

On your adventure through the office you collect money, which can be spent at the coffee shop. Coffee is the lifeblood of Jim, it fully heals him at the break area checkpoints and also powers him up in exchange for a few bucks. Some upgrades are pretty simple, like extra hp and energy for powers. The best upgrades are more unique, like giving you invincibility when you go down to your last hit point. 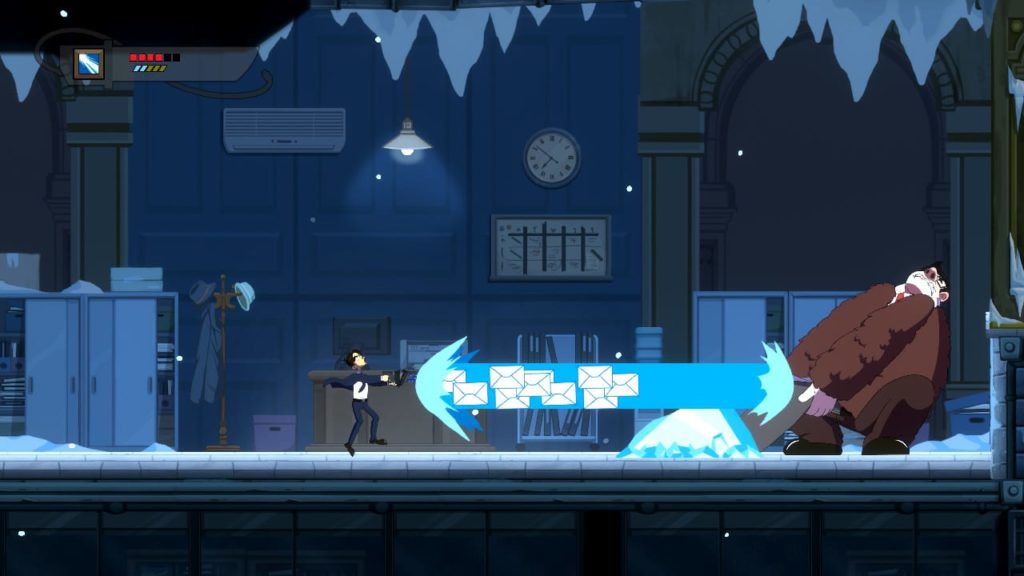 Possibly the biggest issue with The Company Man comes from one of these upgrades. When purchased every enemy you kill heals you for one hp. This absolutely breaks the game, changing the difficulty from perhaps too tricky to almost trivial. I went from struggling to get from one checkpoint to the next, to beating each stage without dying. Also because this power up only helps when there are smaller enemies to batter, it doesn’t help with bosses. Going from easy stages to really tough bosses is really jarring.

One area that The Company Man doesn’t disappoint in is the visuals. The hand drawn style is absolutely gorgeous, and the animations are full of character. Whether it’s the keyboard swinging of Jim himself or a gassy coworker hopping along with the power of his flatulence, every character is drawn and animated with such style.

The Company Man is an entertaining action platformer with a fantastic office theme, but it isn’t without its issues. Taking on varied enemies in an awesome office block setting is great, but dealing with checkpoints too far apart, a melee attack that’s just too short ranged, and an entirely balance breaking power up does bring the experience down. The Company Man is certainly a fun way to spend a few hours, but compared to its peers it’s a unfortunately a little lackluster.

The Company Man is a fun action platformer, but with some balance issues and checkpoints miles apart it's hard to recommend over its peers.