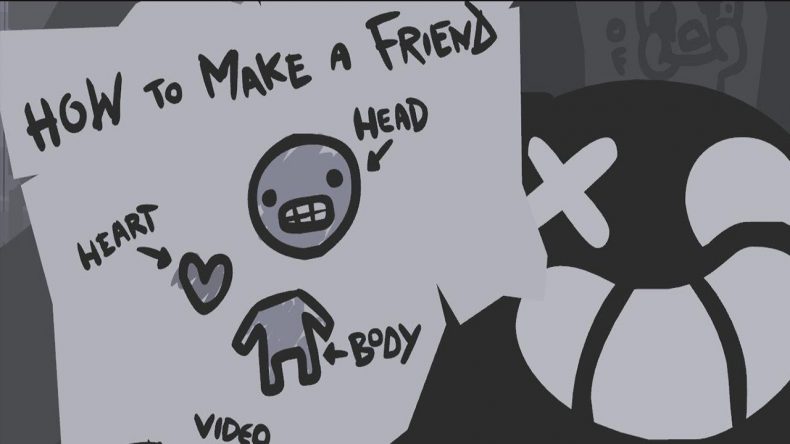 Boy, people sure do like Super Meat Boy, don’t they? That little slab of sentient, uncooked steak drew a lot of attention back on Xbox 360. His maddening adventure through death after death, all to rescue his beloved Bandage Girl from the clutches of the nefarious Dr Fetus, was an excellent example of level design and platform physics. All wrapped up in a difficulty level that would cause countless controllers to be launched across rooms, in frustration.

When one half of Team Meat, Edmund McMillen moved on to create his own games, he eventually settled on The End is Nigh. Released on PC earlier this year, it has now made its way to Nintendo’s latest license to print money: the Switch. People often comment on how a game is “perfect for the Switch” when, quite frankly, the console wouldn’t really bring anything new whatsoever to the game; The End is Nigh however, with its instant action and bite-sized gameplay style, really does suit a console that can be taken out on your commute. What really threw me, was when the protagonist screamed “fuck” during the opening animation. Don’t think I’ll ever get used to that on a Nintendo console. Definitely not one to play on the bus without headphones!

Now, the reason I mentioned Super Meat Boy at the beginning of this review was because there’s really no way around it; this game has not moved on one bit. It has the same art style, albeit monochromatic this time around, and the gameplay itself has the exact same ideas of Team Meat’s modern classic. While there isn’t anything inherently wrong with taking an existing formula and repurposing it for your latest game (indeed, one or two big developers are still making a career out of that), it just feels a bit strange. Especially when it uses the same art style and general ideas as its, ahem, ‘inspiration’. Also, what’s with these people and their fascination with cancerous tumours? It’s genuinely disturbing.

Before any fans of Edmund McMillen out there go searching for your torches and pitchforks, The End is Nigh is a good game. I’m not going to dispute that. User reviews on Steam are very positive on the whole and for good reason; its controls and platforming are just as good as you would expect from such an established developer. The level design isn’t as good, but it’s still intelligent and very well made. It just hasn’t moved on, in the seven years since the gaming world fell in love with Super Meat Boy. Our hero’s story begins when his favourite videogame gives up the ghost, forcing him into the decision to venture outside. Obvious nerd stereotypes aside, there is a reason why our foul-mouthed protagonist doesn’t want to leave home: the world is basically an apocalyptic hellscape. The world is filled with the skeletal remains of its people, but death hasn’t stopped them being snarky. Unlike Super Meat Boy, The End is Nigh often uses enemies to keep you from progressing to the next screen, but traps and bottomless pits are just as abundant as ever. Almost everything is designed to kill you.

One other difference between this and Meat Boy’s game is, there isn’t a dedicated level select screen here; the game flows from left to right in one steady, unbroken line. Each screen hides a tumour for you to collect, but you only keep that tumour if you exit the screen intact. Some are right bastards to get to, and if you die and the screen resets, frustration will find you and it will laugh at your ineptitude. Each screen is nicely designed, growing gradually more complex and tough as the game goes on. Initially featuring mostly running and jumping, The End is Nigh begins introducing wall grabbing, swimming and more, usually throwing in an excuse to murder you in ever more creative ways. But to be honest, despite the controls and movement feeling smoother than ever, the level design never reaches the quality of Team Meat’s Xbox 360 gem.

Arguably The End is Nigh’s biggest problem is that it’s so incredibly familiar. Despite its tighter platforming physics, it just cannot compete with the earlier game’s level design and overall quality. It’s still fun though, and works incredibly well in handheld mode on Switch. It’s not a must-buy at all, but it’s a decent platformer for those wanting a bit of a challenge.

Works very well in handheld
Platforming and controls are tight

Despite being a fun, challenging platformer, The End is Nigh is too similar to Super Meat Boy and the comparison does it no favours whatsoever. It does work very well on Switch though, especially in handheld mode.