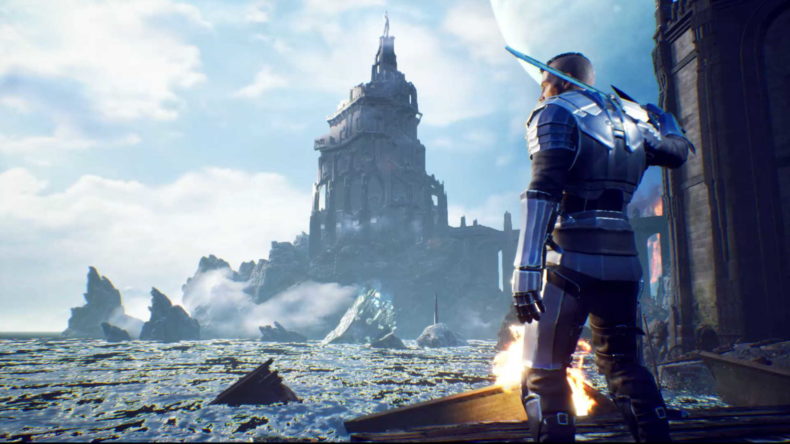 It’s never a good thing when you can’t tell if a game is trying to be a parody of its genre, or is just a bad example of it. Which probably gives away how I feel about The Last Oricru in the first sentence. It’s a sci-fi fantasy action RPG that attempts – with some degree of success – to marry Dark Souls and Gothic. The result is ambitious, certainly, but also a bit of a tonal and mechanical mess.

You play as Silver, a bearded warrior with the voice of a first year Eton student and a silly haircut. Actually, you can opt to swap his undercut for a bald head in what passes for a character creation suite, but there’s not much point unless the undercut really irritates you. Silver has awoken on an alien world called Wardenia, where several factions are currently at war. There’s the Noboru, a race of grumpy neolithic brutes and the Ratkin, who look like rats and talk in nonsensical gibberish. 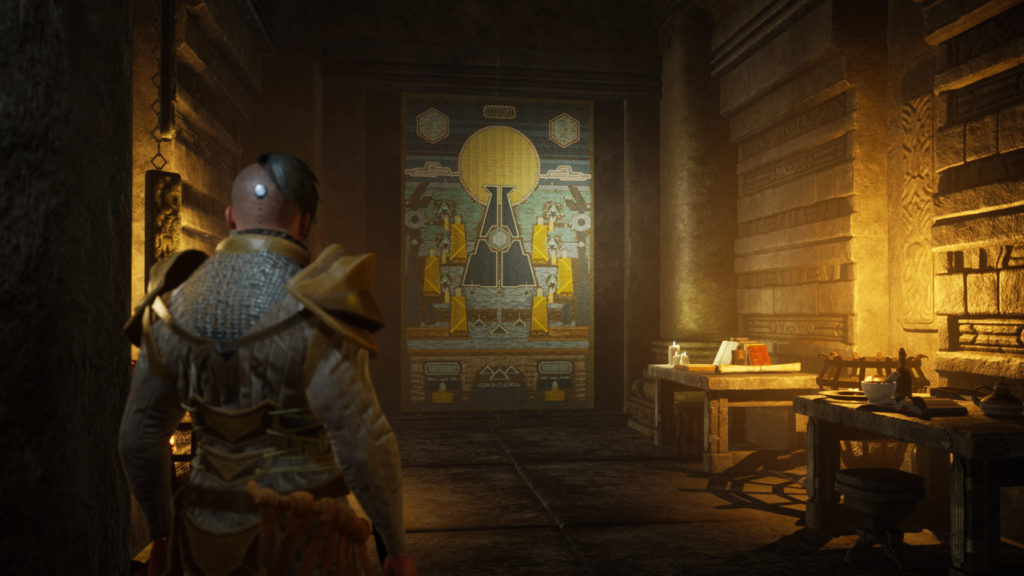 The other human character are also stranded, though you’re contacted early on by a character referred to as “Space Ship”, which is actually AIDA, the AI of the ship that brought you to Wardenia. As Silver explores the world and learns more about its peoples, his – well, your – choices will affect events in small and large ways.

This element is undoubtedly The Last Oricru’s greatest strength. Each choice, even the seemingly innocuous ones, has an effect on the world. From telling white lies to taking sides in conflicts between characters, some choices have ramifications you’ll still be feeling eight or ten hours later. In fact, the branching narrative is so well done that it very nearly makes up for a multitude of issues elsewhere.

For a start, the combat just isn’t very good. It’s not helped by the fact that there’s no option to invert camera controls at launch, which is, for me, an unforgivable sin. It meant trying to retrain my brain every fight, and honestly meant that I couldn’t fully enjoy or engage with the combat. It’s got a very Soulsy feel, with light and heavy attacks mapped to the triggers, a block and parry, and a dodge move for getting behind your enemies. If it wasn’t for the ridiculous restriction on the camera (seriously, it’s 2022 not 2002) I’d have maybe found combat more enjoyable. As it is, I stuck to sword and shield to avoid having to worry too much aiming or adjusting the camera during fights. 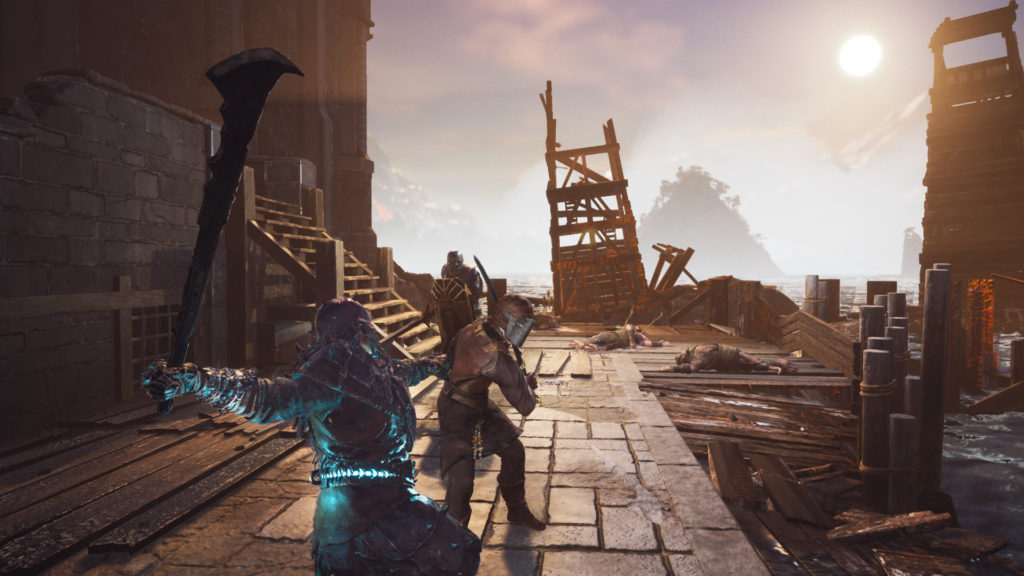 The problem with The Last Oricru’s combat is that it doesn’t feel nearly weighty enough. Your blows connect with little impact, while the dodge evade felt slippery and loose. It’s not awful, but for something so closely aping Dark Souls it needed to be much better. Death isn’t permanent however, and you’ll be resurrected by your magical belt when you die. It’s a handy macguffin to have, for sure, and is a neat way to explain your immortality.

Character progression feels a little restricted too. There’s no option to create a character, you are always the fop-tongued Silver, though you can choose which weapons to use and how you want to play. Stats are handled oddly, allowing you only a set amount and requiring you to lower one to raise another. For example, if you want more strength, you’ll need to actively sacrifice intelligence or dexterity. It’s a weird system, but does add to the replayability factor when coupled with the narrative choice system.

Terminals are where you’ll be resurrected if you die, but they’re also where you can initiate multiplayer. Surprisingly, The Last Oricru features couch co-op, allowing you to play alongside a friend to help you take down some of the tougher bosses. It’s refreshing not to have to play online, and there’s certainly a benefit to having a friend along, even if just for funsies. 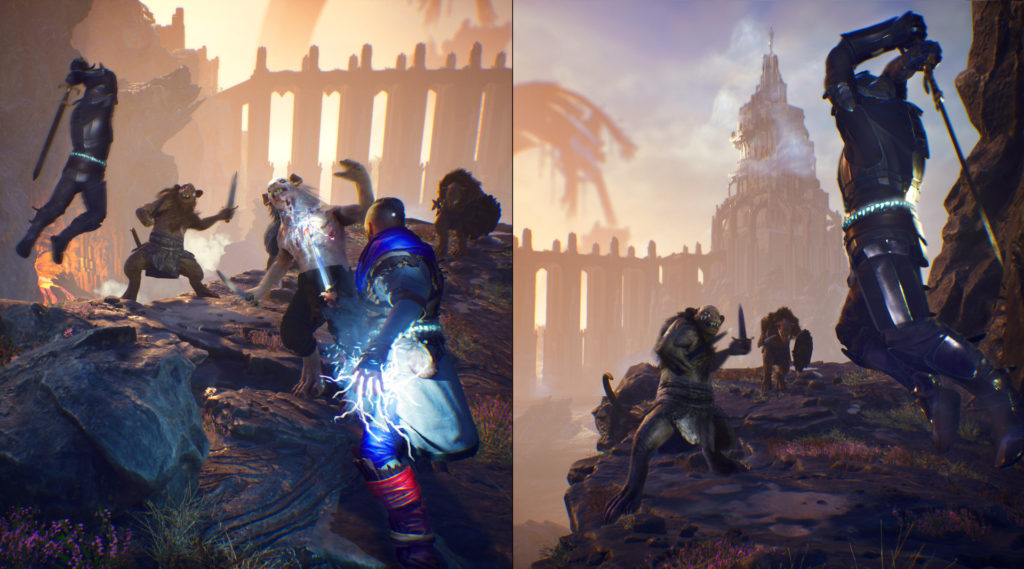 Aesthetically, The Last Oricru most closely resembles the action RPG offerings of Piranha Bytes. There’s a jankiness to it all that reminds me of other “Eurojank” titles like Elex II. Environments feel expansive but never look all that impressive, while character animations from conversation to combat are stilted and a few frames shy of where they should be. Sadly, the writing and voice-acting leave a lot to be desired. Characters deliver lines like they’re reading a takeout menu and the conversational tone can shift from speaker to speaker.

But The Last Oricru is a budget title, and as such feels like a case of too much ambition and not enough experience – which is something studios like Piranha Bytes and Spiders have struggled with in the past before developing strong, loyal fanbases. This has an air of both those developers, but with the added bonus that the choice and consequence system in The Last Oricru is genuinely deep and impressive.

Unfortunately, though, this is a game that either takes itself too seriously or struggles to take itself seriously at all, and that leads to an inconsistent tone and a few uncomortable chuckles when you don’t know if it’s trying to be funny or not. The Last Oricru has some decent ideas and will certainly scratch an itch for fans of Gothic and Risen, but it’s just not quite good enough to overshadow its peers.

The Last Oricru has some decent ideas and will scratch an itch for fans of Risen, but it’s not quite good enough to overshadow its peers.