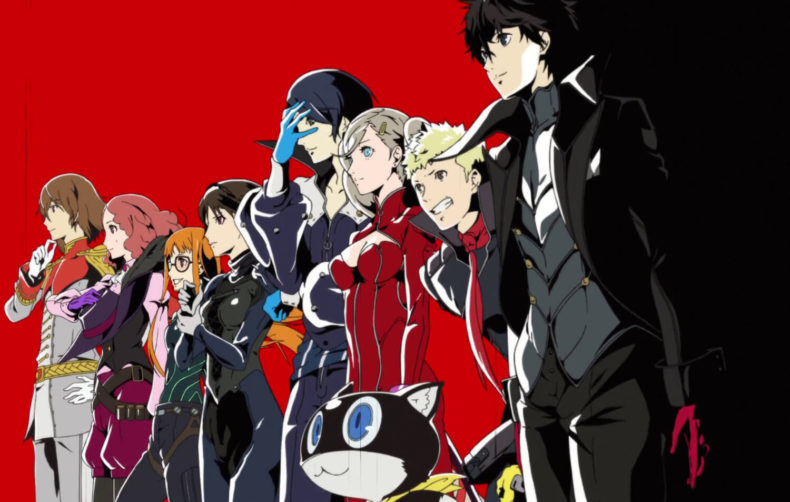 I can’t think of a single game that fewer people I know finished than Persona 5. Every one of them said it was a fantastic game, but playing a hundred hours of a narrative heavy JRPG on a home console is a big ask. Persona 4 Golden’s release on the Vita ensured that thousands of people played through the entirety of that wonderful game, and Atlus fans have been desperate for its sequel to be released on a portable console too. They won’t have to wait long, because the Switch and Steam launch of Persona 5 Royal is almost upon us.

To say our hero Joker is having a rough time at the start of the game would be an understatement. On a dark night he hears a woman being attacked on the streets, and rushes to see what’s going on. After taking down the creep who’s trying to force himself on her, the guy threatens to prosecute him and unfortunately succeeds. With a criminal record and a whole lot of trauma, Joker is forced to move to a new school in Shibuya and take residence above a coffee shop.

Rumours of his crimes are exaggerated around school, and because of that nobody really wants anything to do with Joker. Despite this you’ll soon start hanging out with some lovely misfits, who will become your closest allies when you’re thrown into the world of demons and Persona. It doesn’t take long for a mysterious app to launch you and your classmate Ryuji into a nightmare castle full of monsters, and for your adventure to truly begin.

The castle belongs to the Shadow of the gym teacher at school, who in the real world is abusing students. Because he’s such an asshole his dark deeds have created an evil base in the other world, and you find out from an adorable kitty called Morgana that if you steal the treasure deep within he’ll realise his wrongs and come clean to everybody about his extracurricular activities. Determined to put a stop to this horrendous behaviour, Joker and company decide to use their Personas to bring down corrupt adults – and the Phantom Thieves are born. 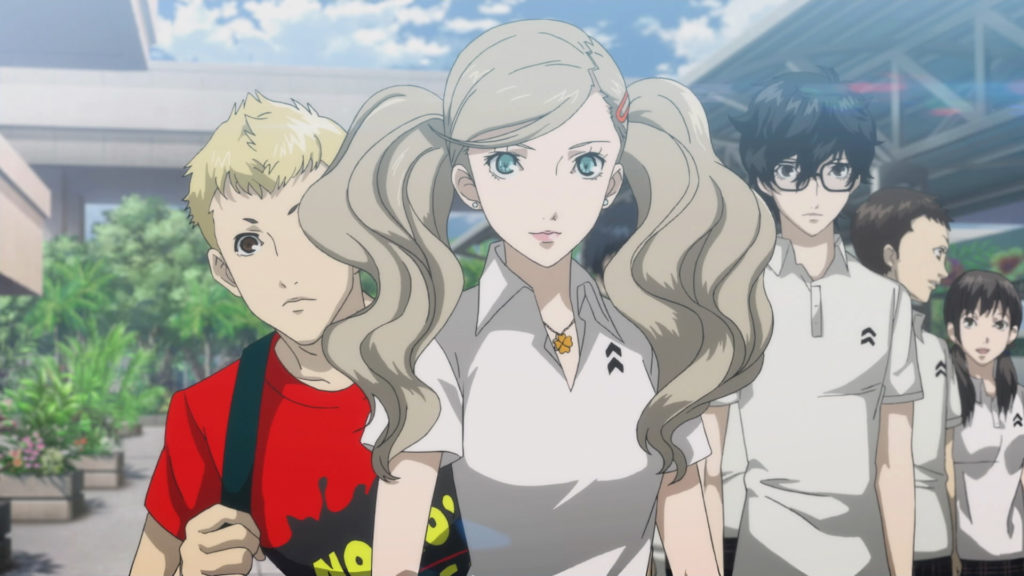 As you progress through Persona 5 Royal you’ll slowly meet new characters you want to join your cause, and once they manage to overcome the struggles they’re having will be granted a Persona to do so. These cool as heck monsters have been in Shin Megami Tensei games for longer than I’ve been alive, and have all sorts of powers you can use in turn-based combat.

To say the flashy combat of Persona 5 Royal is exceptional would be an understatement. Like previous entries in the series, the focus here is hitting your enemies weak points to give your party extra chances to attack. Once you hit all of the weaknesses and knock all those pesky demons down, you’ll be able to unleash an All-Out-Attack and deal massive damage. This feels satisfying every time, but isn’t always easy to pull off.

Finding enemies’ weaknesses might be the main goal in combat, but you’ll have to survive long enough to do that. With dozens of status effects and buffs to take into account, Persona 5 Royal get pretty difficult pretty quickly. Despite seeming relatively simple at first glance, the combat is surprisingly deep and a joy to get stuck into. Especially when you start gather new Persona for Joker.

Unlike his allies, Joker has the power to collect and switch between multiple Persona. This means gathering the demons you meet by chatting to them, and fusing them together in the Velvet Room. The Persona games haven’t done the whole “conversation with a demon thing” before, and I’m really glad it made it into Persona 5 Royal. By gauging each of the monsters’ personalities you’ll be able to figure out what kind of response they want when they question you, and before long you’ll be flirting with Pixies and flexing at Wendigo to impress them into your collection. 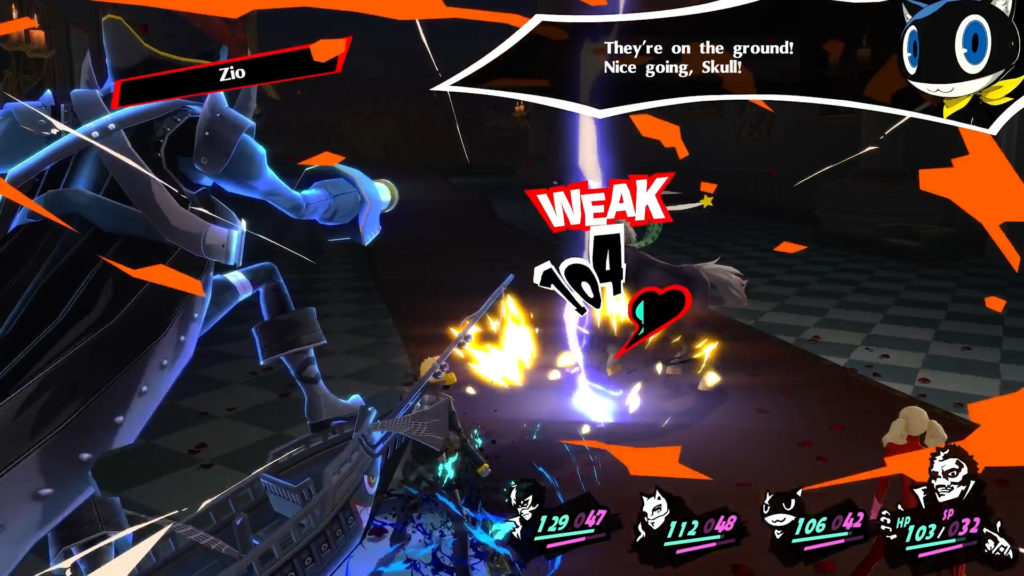 A lot of this will sound familiar to anyone who’s played a Persona or Shin Megami Tensei game before, but there’s plenty of new gameplay elements in Persona 5 Royal. After hitting weaknesses you can Baton Pass to another member of the team to grant them a free turn and some buffs, which can be taken advantage of to obliterate even the toughest bosses. There are also new teamwork attacks that trigger under specific circumstances, which are just as flashy and powerful as the All-Out-Attacks.

When you aren’t beating up demons and punishing corrupt humans, you’ve still got to go to school, study hard and make friends in your day to day life. For many this time management aspect of the Persona games is the best bit, and I tend to agree. You’ll have to balance making new friends (which will power up your Personas when fusing) and improving yourself as a person by raising personality stats to really succeed in Persona 5 Royal, so don’t just think you can kick back and watch movies every evening after school.

No other RPG series has ever made a world I could get lost in quite like Persona, and it’s because of these normal day-to-day moments. Getting asked questions in class and hearing the murmurs of your peers when you get it right is just magical, and wandering around town and discovering every building has a purpose and possibly a new friend to connect with is a joy. If ever a video game could convince me to travel the world and meet different people, it’s Persona 5 Royal. 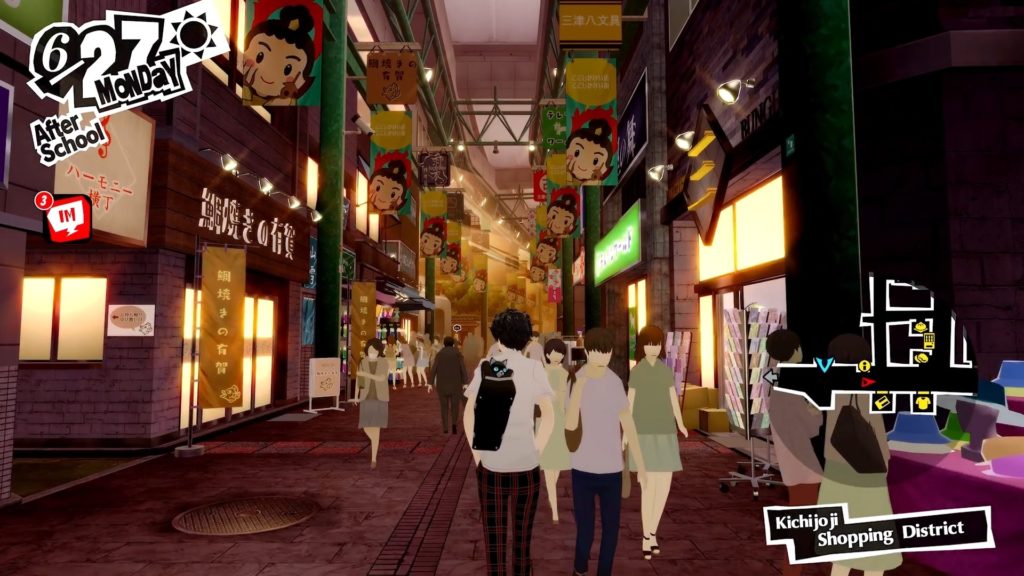 The characters are so varied and delightful too. You’ll learn more about each of your teammates when you hang out, from Ryuji’s struggles with the track team to Anne’s life modelling as a teenager. Some of your Social Links are with more unexpected characters too, like the young doctor who’s been shunned from the medical community or the politician who delivers passionate speeches on the street. I was so eager to learn more about every single one of them, and none of them disappointed.

If the engaging story and thrilling combat don’t pull you through Persona 5 Royal, the sheer style of the game will. This game is gorgeous, and has the snazziest transitions between scenes and menus that you’ll ever see. Not a single aspect of the visual design was thrown into the game at random, and it just makes the whole package feel spectacular.

The music also deserves a special mention, because the entire soundtrack is sensational. From returning songs like the theme of the Velvet Room to every single battle theme, I could listen to this music on a loop for the rest of my life. The soundtrack isn’t the only aspect of the audio that kicks ass though, the voice acting is just as perfect. Not a lot of video games can nail audio quite like Persona 5 Royal.

I played through the entirety of Persona 5 Royal on the Steam Deck, and I’m happy to report that it runs flawlessly on the beast of a machine. The frame rate is a consistent 60 FPS, and the game just looks fantastic on that big screen. I don’t think I’d have ever found the time to finally complete this masterpiece if not on a portable console, and I’m glad I didn’t have to compromise the visuals or suffer any technical issues to do so. 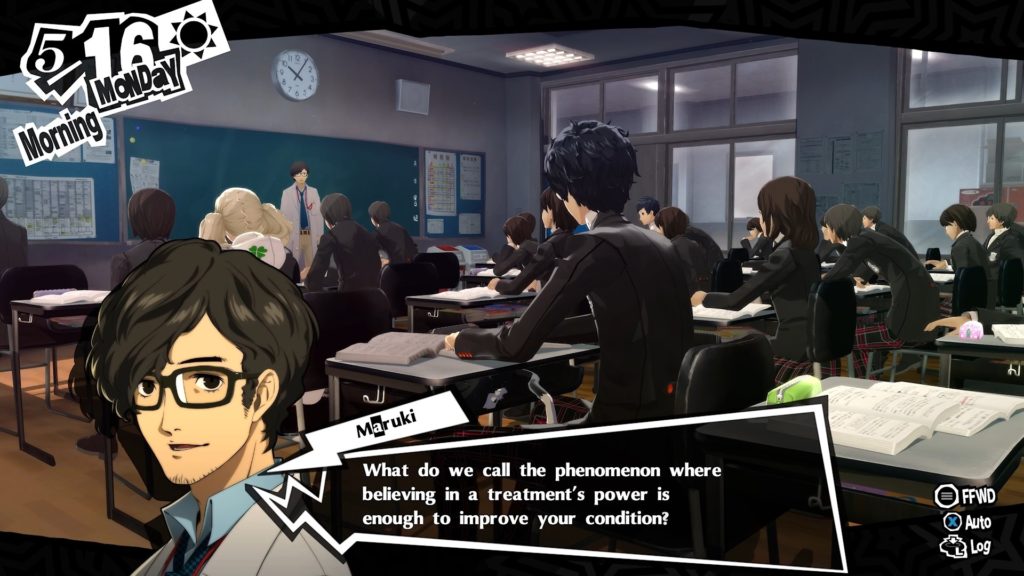 Likewise, on Switch the game is just as smooth, albeit with a slightly blurrier overall resolution. On the TV in docked mode it’s absolutely fine, but really, there’s little reason to think you’d choose to play the game for the first time on Switch and use it docked. Handheld mode is definitely lower resolution, but there’s little to no performance issues, and being on Nintendo’s smaller handheld offers a way for numerous people to finally play the game in the small pockets of time that they have with the console.

As someone who played through Persona 4 three times, I was interested to see what Persona 5 Royal would do to shake things up in a sequel. I think the most impressive improvement is the dungeon design. Whereas in other games in the series you’d be walking around flat, bland corridors between battles, the layout of the “palaces” is something else. There are walls to climb up, puzzles to solve, and a sort of stealth mechanic you can use to get the drop on enemies. It really makes it feel like you’re a badass thief instead of an RPG protagonist wandering from fight to fight.

If I had to nitpick anything about Persona 5 Royal I guess it would be the main party. While charming in their own right, they just can’t live up to the perfection that is the cast of Persona 4. There isn’t much in it, but that’s the one thing that’s slightly worse than the previous game in the series.

Persona 5 Royal has skyrocketed its way up my personal list of greatest games of all time, and now that it’s out on handheld consoles there’s no excuse to avoid it any longer. The dark story, sensational combat and stylish aesthetic all blend together to create an JRPG masterpiece that simply must be experienced to be believed. If you play one game for the rest of the year, play Persona 5 Royal.

Persona 5 Royal is quite frankly one of the best RPGs ever made, and now that it can be played portably you have no more excuses.